While Canadian based C6 Launch Systems waits for the Canadian government to move forward with regulatory changes that will allow companies like C6 to launch in Canada, they are moving forward with preparations for their first suborbital test at a foreign spaceport.

In press release C6 stated that “The mission will be a significant milestone for both companies. GNC will validate the operation and accuracy of their revolutionary inertial navigation system (INS) in space applications. The flight tests will provide tangible confirmation of C6 Launch’s vehicle design, payload integration, ground operations, and telemetry. It will be another major step on C6 Launch’s journey to space.”

C6 Sistemas also said it was “finalizing contractual negotiations with COMAER (Comando da Aeronáutica) for its future operations within the Alcantara Space Center.

Boucher is an entrepreneur, writer, editor & publisher. He is the founder of SpaceQ Media Inc. and CEO and co-founder of SpaceRef Interactive LLC. Boucher has 20+ years working in various roles in the space industry and a total of 30 years as a technology entrepreneur including creating Maple Square, Canada's first internet directory and search engine.
@marckboucher
Previous DND Establishes 3 Canadian Space Division
Next Ukrainian space factory, Yuzhmash, hit by Russian missile attack 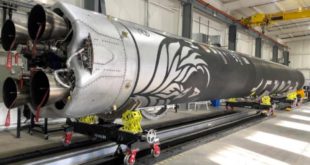 A 2021 update to the small launch vehicle survey