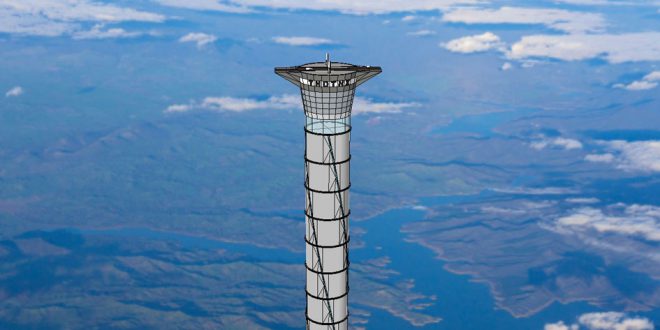 A Different Concept for a Space Elevator Emerges

In late July, Thoth Technology Inc. issued a press release announcing it had been granted a patent for a “Space Elevator”. It was not a Space Elevator in the traditional sense, but rather a tall structure with an elevator that could, if built, reach 20 kilometres at first, and perhaps eventually 200 kilometres. What’s intriguing about this concept is the incremental approach to solving an existing problem, lowering the cost to access space.

A traditional Space Elevator concept uses an anchored tether that is 36,000 kilometres in length. You can image the challenges of building something of that size.

Thoth started the patent process in 2008. Now that it has been approved, and the challenge period is over, they went public.

Will a 20 kilometre Space Elevator be built in Canada? After all, the company is a Canadian. That is unlikely. The value to Thoth is in licensing the patent and working with another party who might be interested in building a smaller prototype.

In this good CBC story, Caroline Roberts, president and CEO of Thoth Technology said “the company hopes to build a 1.5-km-high prototype within five years”.

Roberts also said that a 20 kilometre Space Elevator would cost of around $5 billion.

Aside from the technical challenges and the debris issue as mentioned in the CBC article, there are two other important issues, funding and politics.

For anyone to invest that type of sum, which by the way is substantially more than SpaceX has invested in their company, there would have to be a rock solid business case.

To put a 20 kilometres tall structure in perspective, Mount Everest is just under 9 kilometres tall and when you fly on a commercial jetliner you’re flying usually upwards of 11 kilometres.

Politics is an issue as well. When you’re dealing with a man made structure that’s taller than Everest and higher than commercial jets fly there’s bound to be some political issues, not to mention regulatory issues that will have to be dealt with.

This concept is different, there’s some potential here worth exploring. Now that the story has reached out globally, it will be interesting to see if anyone is interested in pursuing this technology.

Boucher is an entrepreneur, writer, editor & publisher. He is the founder of SpaceQ Media Inc. and CEO and co-founder of SpaceRef Interactive Inc. Boucher has 20 years working in various roles in the space industry and a total of 28 years as a technology entrepreneur including creating Maple Square, Canada's first internet directory and search engine.
@marckboucher
Previous University of Toronto Hosts Field and Service Robotics Conference
Next Space Industry Association Gets Commitment from NDP and Liberals for a Long-Term Space Plan