The Humans to Mars Podcast

A Mars Ascent Vehicle (MAV) is a key mode of transportation on the Red Planet in "The Martian." Credit: NASA.
Share

The goal of sending Humans to Mars has been a driving force for many in the space community for decades. In 1949 Dr. Wernher von Braun, who was instrumental in developing the U.S. rocket program, published the seminal book, Project Mars, a Technical Tale. As recently as last year, NASA was marketing an eventual human mission to Mars as the Journey to Mars.

Today that goal is getting closer, and within two decades might be achieved. My guest this week on the SpaceQ podcast is Chris Carberry, the CEO and co-founder of Explore Mars.

Explore Mars is a non-profit that brings aerospace business leaders together with government entities, mediating and facilitating the direct flow of information, and was incorporated in February 2010. Prior to working at Explore Mars, Chris was the Executive Director of the Mars Society for almost two years.

In this weeks show we discussed the ongoing effort for a human mission to Mars and how Explore Mars is bringing organizations together around the world to achieve that goal.

Boucher is an entrepreneur, writer, editor & publisher. He is the founder of SpaceQ Media Inc. and CEO and co-founder of SpaceRef Interactive Inc. Boucher has 20 years working in various roles in the space industry and a total of 27 years as a technology entrepreneur including creating Maple Square, Canada's first internet directory and search engine.
@marckboucher
Previous Spacewalk Needed to Replace Another Degraded Canadarm2 Hand on the International Space Station
Next In a First, China Launches Canadian Satellite for Kepler Communications

Terranauts: Teaching and Training the Next Generation of Space Explorers 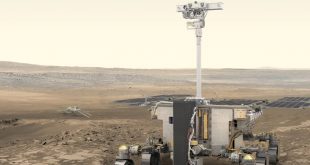 2020 is Going to be an Extraordinary Year for Mars Missions