Today a global collaboration of researchers using the newly developed Event Horizon Telescope (EHT) revealed for the first time a picture of a black hole.

Canadian researchers were a part of that team, including a group from the University of Waterloo headed up by professor Avery Broderick who is also an associate faculty member at Perimeter Institute for Theoretical Physics.

During a press conference revealing the image, Broderick marvelled at how the resulting image looked like the predictions which had been previously made including from theoretical models he had created.

Broderick said “It turns out our predictions were stunningly close; we were spot-on. Now, we’re salivating about all the science that the EHT will allow us to do. We can now probe the gravitational regime right at the edge of the most massive type of black hole known in the universe; these incredibly massive things that lie at the centres of galaxies and rule their fates.”

Broderick further stated “the EHT is a culmination of almost two decades of effort by a global team. Once you’ve invested that sort of time, it’s a deep feeling of satisfaction that, finally, we have in hand this quarry we’ve been chasing for so long. This first image is beautiful and a profound moment in science – it’s the first time we’ve seen the unseeable.”

The EHT is a planet-scale array of eight ground-based radio telescopes which was designed to capture images of a black hole as depicted in the video below.

A press release from the University of Waterloo states that “the EHT links telescopes around the globe to form an Earth-sized virtual telescope with unprecedented sensitivity and resolution. The EHT is the result of years of international collaboration, and offers scientists a new way to study the most extreme objects in the Universe predicted by Einstein’s general relativity during the centennial year of the historic experiment that first confirmed the theory.”

The image revealed today is that of a black hole at the centre of Messier 87, a large galaxy in the Virgo galaxy cluster. According to the press release the “black hole resides 55 million light-years from Earth and has a mass 6.5-billion times that of the Sun.”

The project was in part funded by US National Science Foundation (NSF) who provided $28 million in EHT research, the largest commitment of resources for the project.

Boucher is an entrepreneur, writer, editor & publisher. He is the founder of SpaceQ Media Inc. and CEO and co-founder of SpaceRef Interactive LLC. Boucher has 20+ years working in various roles in the space industry and a total of 30 years as a technology entrepreneur including creating Maple Square, Canada's first internet directory and search engine.
@marckboucher
Previous “What a View” – David Saint-Jacques Completes His First Spacewalk
Next Canada’s New Space Strategy Does Little to Reform Regulations 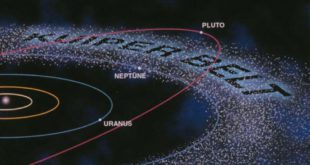