Its taken Virgin Galactic nearly seventeen years to reach today’s milestone of ushering in what many hope will be a new era in tourism, space tourism that is, as Virgin Galactic successfully launched its first fully crewed rocket powered test flight.

While the weather delayed the launch about an hour and half, once the go for launch was given, the crew did the walkout to the Virgin Mothership (VMS) EVE and it really began to sink in what this would mean for all involved. It’s a day Sir Richard Branson and his team have long dreamed of. Though flights are costly and only for the wealthy, the hope is that someday in the future, the not too distant future, the price can be brought down so that millions of people can have an affordable experience of launching into space, seeing the Earth from space, and experiencing zero g.

Takeoff and the ascent to drop altitude went smoothly. Once the VMS EVE neared the 15,000 metres level, the VSS Unity was dropped and its rocket engine kicked in almost right away and it looked exactly as planned.

VSS Unity, with its six crew rocketed to the edge of space, reached an altitude of 86.1 km. That put it officially in space above the FAA and NASA altitude of 80 km. Once there, the crew had about four minutes of zero gravity to perform summersaults and gaze out the windows to see the full majesty of the Earth below them.

"To all you kids down there…" – @RichardBranson's message from zero gravity. #Unity22

Upon safely returning to Spaceport America the party began. That party included a live concert by Khalid, an El Paso, Texas R&B star who released a new single for the occasion called “New Normal.” Also present, and a guest commentator on the Virgin Galactic webcast, was Canadian astronaut Chris Hadfield who presented each crew members with their commercial astronaut wings.

At one point Richard Branson quoted Bill See saying, “The brave don’t live forever but the cautious don’t live at all. The only thing that’s truly terrifying is the unlived life.” Branson has certainly lived a life full of adventures.

The VSS Unity and VMS EVE crew members were:

Watch a replay of the Virgin Galactic Unity 22 spaceflight

Boucher is an entrepreneur, writer, editor & publisher. He is the founder of SpaceQ Media Inc. and CEO and co-founder of SpaceRef Interactive LLC. Boucher has 20+ years working in various roles in the space industry and a total of 30 years as a technology entrepreneur including creating Maple Square, Canada's first internet directory and search engine.
@marckboucher
Previous Open-source flight software called F Prime used on NASA’s Ingenuity Mars Helicopter
Next Wyvern CEO Chris Robson in Conversation 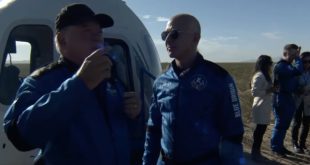 The Canadian Space Agency signs an agreement with Virgin Galactic