Euroconsult is predicting a trillion dollar "explosion" in the satellite market by 2031 in a report released at the start of the World Satellite Business Week. Credit: Euroconsult.
Share

Euroconsult is forecasting a trillion dollar “explosion” in the satellite market by 2031, driven by a shift to data-driven applications and the rise of pay-as-you-go, service-driven approaches.

In their new report, Satellite Connectivity and Video Market, and in the presentation by Euroconsult Canada managing director Nathan de Ruiter at this week’s World Satellite Business Week conference (WSBW), Euroconsult is forecasting stunning growth in services-based revenue for satellite operators. They expect that data applications will jump from 15% of total market revenue to 41% of total market revenue.

While they grant that some of that shift will come from a broad decline in satellite-based video and television applications—predicting a loss of 26 million direct-to-home TV subscribers and 8500 satellite TV channels—that will be greatly overshadowed by the rise of data applications and data-based services. This shift, as operators look to avoid a “commodity price trap” by reorienting to service-based offerings, could make them over $1.2 trillion by the end of 2031.

They also pointed to two other key shifts that will help make this growth happen. First, Euroconsult managing consultant Dimitri Buchs pointed to a shift in business models to “pay as you go” as a risk-reduction method for both broadcasters and SPs, saying “Whereas pay-as-you-go was mostly used in data segments, it has become more apparent in the video segment in recent years, notably for new players entering the market. Consequently, satellite operators’ backlogs have decreased in recent years.”

The other shift is the increasing use of “non-geostationary orbit satellites” (NGSO), like those in low earth orbits or polar orbits. Their release said that “the rapidly growing importance of NGSO in connectivity markets is heavily impacting the FSS industry, with an increasing number of players looking at a multi-orbit strategy to expand their business, as highlighted by Eutelsat’s recently announced merger with OneWeb.”

Despite headwinds from the COVID-19 pandemic and the conflict in Ukraine, causing supply chain and manufacturing “bottlenecks”, they predict a “substantial growth in capacity supply to more than 97 Terabytes per second within the next 5 years, an added supply accounted for up to 94% by NGSOs”. That increase in supply will be accompanied by 13x growth in capacity demand, which will boost capacity revenues from $10.2b in 2021 to $22.4b in 2031, as operators continue “opening the floodgates of new capacity.”

In his presentation at WSBW on Monday, de Ruiter added that “There is so much room for growth…only 10 percent of the universal broadband access market is currently penetrated by satellite and below 20 percent of the addressable mobility market is currently captured by satellite.” He also said that they expect serious consolidation, where “large incumbents…acquire new entrants and component suppliers to better control the supply chain.”

Craig started writing for SpaceQ in 2017 as their space culture reporter, shifting to Canadian business and startup reporting in 2019. He is a member of the Canadian Association of Journalists, and has a Master's Degree in International Security from the Norman Paterson School of International Affairs. He lives in Toronto.
Previous MDA to Provide Ka-Band Steerable Antennas for Airbus OneWeb Satellites
Next NorthStar Inks Partnership with Telespazio for Space Domain Awareness 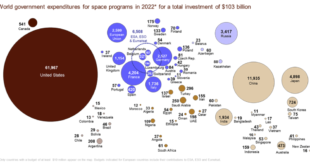