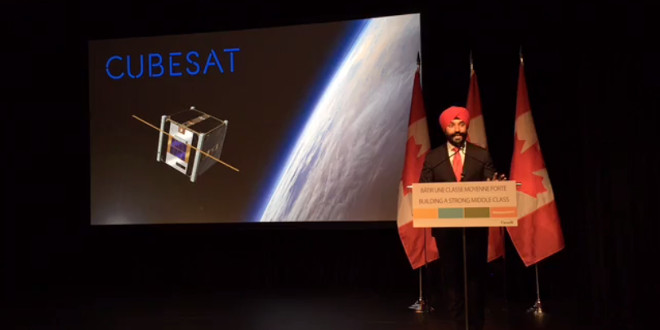 The CSA to Fund CubeSats, Quantum Encryption and a Mars Orbiter Instrument

In the recently announced budget the government had announced $80.9 million in new funding for the Canadian Space Agency over five years. We now know a little more about the projects the funds will go to.

The projects being funded are:

Here are more details about the Canadian CubeSat Project the CSA released after the press conference this morning.

With respect to the new Canadian CubeSat Project this is an initiative that universities have been anticipating for some time and which the Canadian Space Commerce Association* (CSCA) had advocating for. The CSCA will be holding its second annual Canadian SmallSat Symposium this fall.

* Note: The author of this article was the Executive Director of the Canadian Space Commerce Association and author of a brief advocating for funding CubeSat funding that was submitted to the Finance Committee in its annual pre-budget solicitation in 2016.

Boucher is an entrepreneur, writer, editor & publisher. He is the founder of SpaceQ Media Inc. and CEO and co-founder of SpaceRef Interactive LLC. Boucher has 20+ years working in various roles in the space industry and a total of 30 years as a technology entrepreneur including creating Maple Square, Canada's first internet directory and search engine.
@marckboucher
Previous The Canadian Space Agency Launches Its Own Space Apps Challenge
Next The CSA and ISED Blew it and Missed an Opportunity for Good Media Coverage