When Canadian astronaut Chris Hadfield installed a new “disaster cam” in the Destiny module window on the International Space Station (ISS) in January 2013, little did he know that one of the first disasters photographed would come from his homeland. The camera known as ISERV–the ISS SERVIR Environmental Research and Visualization System–snapped digital images of downtown Calgary as it was inundated by floodwaters in June 2013. 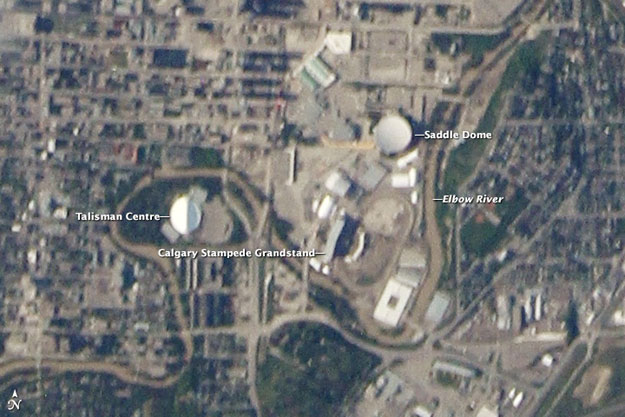 Acquired June 24, 2013.
The top photo was acquired on June 22, near the height of the flooding around the Saddledome and the venue for the Calgary Stampede. The lower image from June 24 shows sediment and debris deposited around the city as the waters receded. (Turn on the image comparison tool to see the difference.) Note that the June 24 image is slightly blurry because the ISS was passing slightly to the east, and the city was not centered below the fixed, downward pointing camera. Larger, downloadable images (linked beneath each image above) show the floodwaters from both the Bow and Elbow Rivers inundating the wider Calgary metropolitan area.
Flooding in southern Alberta killed at least four people, forced the evacuation of more than 100,000 citizens, and caused billions of dollars in damage. “Floods are an unbridled misery,” Hadfield wrote. “My heart goes out to my fellow Canadians affected by the disaster.”
ISERV is a “testbed” instrument, an engineering exercise toward developing an imager that can help nations monitor natural disasters and environmental concerns. Nearly 95 percent of the Earth’s populated area is visible from the space station’s orbit.
ISERV captured 24 images of the Alberta flooding from June 22-24. The research team sent those images to Ken Korporal, agri-geomatics manager for Environment Canada, who distributed them to Agriculture and Agri-Food Canada, the Canada Centre for Remote Sensing Emergency Geomatics, and other government agencies. The Royal Canadian Mounted Police noted that they have found the photos useful for managing the flood aftermath.
ISERV was developed to support a joint NASA/U.S. Agency for International Development project known as SERVIR, as well as the broader applied sciences community. The project provides satellite data and tools to environmental decision-makers in developing countries and operates via regional centers in Nairobi, Kenya; Kathmandu, Nepal; and Panama City, Panama. These centers can task ISERV to photograph areas of concern for environmental issues and natural disasters. SERVIR is coordinated from NASA’s Marshall Space Flight Center.
“We’re glad to be able to provide images to the Canadian government to help with response to this disaster and with assessing the damage,” said Burgess Howell, ISERV Principal Investigator. “We’re also pleased that ISERV’s Pathfinder system, even in its shakedown phase, is fulfilling our expectations of usefulness in the aftermath of disasters.”
“I am proud that we are using the unique view from the space station to help make response efforts more effective,” Hadfield added. “The space station has a global reach in its ability to help those in need and make lives better here on Earth.”

Boucher is an entrepreneur, writer, editor & publisher. He is the founder of SpaceQ Media Inc. and CEO and co-founder of SpaceRef Interactive LLC. Boucher has 20+ years working in various roles in the space industry and a total of 30 years as a technology entrepreneur including creating Maple Square, Canada's first internet directory and search engine.
@marckboucher
Previous Fires in Quebec
Next Forest Fires Near James Bay, Quebec