Space and Terrestrial Mining for the Present and Future

After two years of holding a joint space mining conference in partnership with the Space Resources Roundtable (SRR), organizer Dale Boucher from the Northern Centre for Advanced Technology Inc. (NORCAT) says space and terrestrial mining are becoming more “joined at the hip” and as such, it’s becoming more feasible to do such work in space.

The Planetary Sciences and Mining Space Symposium (PTMSS) took place in Ottawa in mid-May and included a heavy focus on technology demonstrations. For example, Ottawa company Neptec – which is diversifying its laser-based vision business into other areas like rovers – offered an afternoon tour of its facility to show off the Juno rover.
“(The partnership with) SRR brings us to some of the high-level policy people who have connections with the decision-makers in both NASA and the United States Congress … the white papers that come up generally make their way into Congress,” Mr. Boucher said.
“The reality is that NASA is the biggest budget and therefore the leader of any of the space activities, so joining these conferences at the hip basically introduced policy-making into PTMSS and real hardware technology demonstrations to the Space ResourceAs Roundtable.”
Although there are resources theoretically available on the Moon or asteroids for mining, immense logistical and budget challenges are making it difficult for the mining industry to immediately see their benefit, Mr. Boucher added.
Certain treaties – like the Outer Space Treaty – forbid declaring ownership over any extraterrestrial resources, although signing into these treaties is a voluntary process for countries. There are ongoing discussions in the industry about property ownership and prospecting rights.
The second issue is who is the customer – who is willing to pay the bill for a mining company to travel to a world outside Earth and transport it back to Earth. Certain resources like Helium-3 are available on the moon, but its application and applicability to Earth is still being fleshed out.
Finally, there is also technology.
“There are very fundamentally different objects and objectives and methodologies and technology … for example, you could not use typical terrestrial mining techniques on an asteroid. The first time you would try to blast-drill, you would blow yourself off the object due to the lower gravity.”
But it’s through conferences like the PTMSS that these problems are being hammered out and addressed. The industry sees three pockets of activity for mining in space – the moon, near-earth objects and Mars and other planets.
That said, the mining industry does understand how to deal with long lead times – some mines take decades to develop – and many of the procedures already undertaken, like remote sensing, still apply to space mining.
“I think there have been changes on both sides of the fence,” Boucher said.

Is SpaceQ's Associate Editor as well as a business and science reporter, researcher and consultant. She recently received her Ph.D. from the University of North Dakota and is communications Instructor instructor at Algonquin College.
Previous ISS Robotic Refueling Mission Problematic for MDA
Next Juno Set for Launch to Gas Giant Jupiter – UPDATED

Is asteroid mining closer to reality than previously thought? 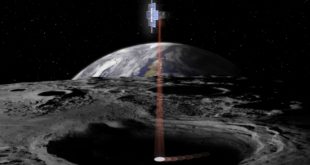