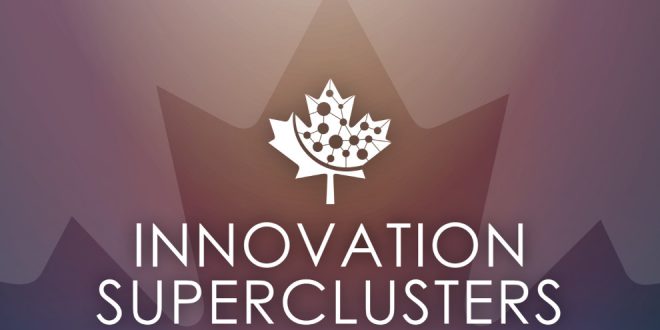 Share
When the Liberal government announced the Innovation Superclusters Initiative (ISI) with up to $950 million in funds available through 2022, the space community immediately took notice and began scouring the program guide for details. From the get go, one of the biggest challenges would be the meeting the matching fund requirement of the $125-$250 million for each supercluster.

The government defines a supercluster as “an innovation hotbed that is home to a strong industrial cluster, or clusters, linked through their shared reliance on specialized inputs, including technologies, talent and infrastructure. Compared to clusters, superclusters have: stronger and more numerous linkages across sectors, and between firms, public and academic research assets;  a strong brand and competitive advantage that translates into global recognition and impact, and the ability to attract talent and investment across highly innovative industries; and exceptional performance, including an outsize impact on job creation and GDP.”

If a space supercluster was to happen then the industry led consortium would need to match the governments funding with 75% in cash and no more than 25% of in-kind services.

As an example, if a space supercluster submitted letter of intent for a $125 million supercluster, than the cash portion of the funding the consortium would need to bring to the table would be $93.75 million. Seemingly, that might be a tall order for a Canadian space supercluster as there aren’t many companies in the space community willing to ante up that kind of funding.

This has not deterred one effort though, that of Satellite Canada (SatCan).

Satellite Canada is a new effort led by industry veteran Ryan Anderson of QShift. Anderson who’s experience includes working for nine years with Telesat is working towards putting together a consortium with the right mix of industry and university partners.

Anderson told SpaceQ that he has 10 companies committed to date including one significant anchor partner and that SatCan should get “well past the $125 million range” needed to qualify for the funding portion of the supercluster application.

One part of the ISI program guide that appears to be confusing applicants is the need to for the supercluster to be regional, yet at the same time expanding and having a national reach. In the case of a Satellite Canada the supercluster would have a regional start in Ottawa but with a reach expanding to Toronto and the Kitchener-Waterloo region before potentially expanding nationally. Ontario is home to largest concentration of space companies so it makes sense for a supercluster to be located in there.

As the name implies, Satellite Canada would focus on the satellite sector, both communications and earth observation as illustrated in this graphic.

Anderson told SpaceQ the “the cluster is tackling satellite technologies taking the New Space approach of addressing terrestrial needs and opportunities that satellite serves. We have several prominent Canadian satellite companies with room for expansion both inside the industry and in downstream sectors. As an example, big data, Internet of Things (IoT), AI, autonomous vehicles and precision agriculture.”

The deadline to submit a Letter of Intent (LOI) is July 21, 2017. With less than two weeks before the LOI is due, Anderson is working to close on the remaining organizations that would be part of the LOI and make sure all the little details are taken care of.

The government will fund five superclusters giving preference to those in these specific industries:

While SatCan’s supercluster is not strictly focused on just one of the specific industries the government is interested in, it does encompass most of them.

Editor’s note: If you would like more information on Satellite Canada you can contact Ryan Anderson at randerson@QShift.ca.

Boucher is an entrepreneur, writer, editor & publisher. He is the founder of SpaceQ Media Inc. and CEO and co-founder of SpaceRef Interactive LLC. Boucher has 20+ years working in various roles in the space industry and a total of 30 years as a technology entrepreneur including creating Maple Square, Canada's first internet directory and search engine.
@marckboucher
Previous New Canadian Astronauts Joshua Kutryk and Jenni Sidey Answer Your Questions
Next Vector Space Systems – Small Rockets, Small Satellites and Possibly a Big Payday

Moving the needle for Canadian space regulation and licensing