Sapphire Satellite Will Kick Off Other Space Projects: MacKay

With one defence satellite ready to fly, the government’s attention will soon turn to others. That was the message Defence Minister Peter MacKay delivered to media representatives Thursday at a press conference for the official “send-off” of the Sapphire satellite.

His promise came amid media reports that the Department of National Defence is concerned about ongoing delays in the RADARSAT Constellation program, which has
defence applications.
In remarks to reporters, MacKay indicated that there are several defence projects underway and that “there will be other announcements.” But he added that RADARSAT Constellation falls more under the Ministry of Industry portfolio than that of Defence, referring queries of the timeline on that project to that ministry or to the Canadian Space Agency. Their reported timeline for launch is 2016-17.
Searching for Space Debris
The $66-million Sapphire is expected to launch Dec. 12 after years of delays. Joining it are two other Canadian satellites: the Near Earth Object Surveillance Satellite (NEOSSat) and a University of Toronto nanosatellite called CanX-3a BRITE. The Indo-French SARAL satellite is the primary payload.
Sapphire, which is a cube one metre in size, will hug the Earth in a close orbit 300 km from the surface. It will peer at satellites and space debris circling above, between 6,000 and 40,000 km from Earth. Sapphire will orbit with the sun constantly behind it, allowing the light to reflect on the other targets it is seeking.
The satellite will not only provide information to Canada, but it also will send data to the United States’ Space Surveillance Network. Canada, said DND, will have only one of two satellites currently operational in this approximately 30-piece network.
Among other duties, the network of ground stations and satellites keeps track of objects launching to space and entering the earth’s atmosphere. One aim is to prevent false alarms in the United States’ missile warning system. Another is to find bogeys.
The network tracks more than 22,000 objects in orbit and also informs NASA if an object threatens the safety of the International Space Station. 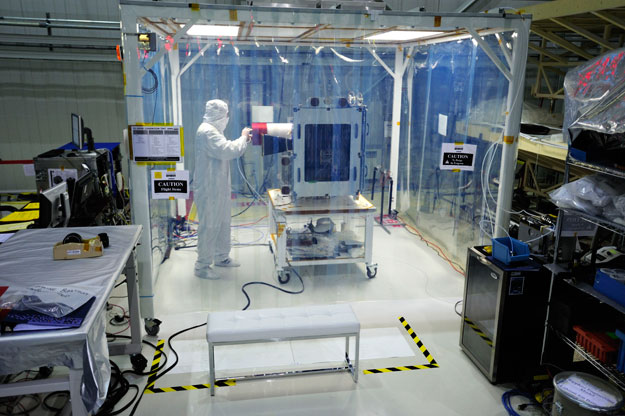 Sapphire being prepped for shipping.
RADARSAT Concerns
Sapphire, defence officials emphasize, generated 45 jobs during its build. The prime contractor was MacDonald, Dettwiler and Associates. MDA also worked with Canadian company COM DEV and two foreign firms, Britain’s Surrey Satellite Technology Ltd. and Denmark’s Terma A/S. Additionally, MDA recently received an operations and maintenance support contract for Sapphire worth up to $11.7 million over five years.
However, both MDA and COM DEV have revealed they are doing layoffs as a result of another project with Canadian government involvement: RADARSAT Constellation. This is a network of three satellites that is a follow-on to RADARSAT-1 and RADARSAT-2, focusing on areas of security interest such as the Canadian Arctic.
In early October, COM DEV removed 31 people from its payroll amid funding uncertainty for the network of satellites. MDA also undertook a restructuring in March. At the time, MDA stated that the federal budget “does not include the funds required to continue the RADARSAT Constellation Mission as currently envisioned.”
Projected costs for the project are reportedly ballooning to $1 billion, from $660 million.
Also on Thursday, documents from DND were quoted in the Ottawa Citizen. The documents said that if RADARSAT Constellation does not launch soon, it will be difficult for Canada to monitor its own borders from space when the five-year-old RADARSAT-2 reaches the end of its service life.
In remarks at the International Astronautical Congress earlier this month, CSA president Steve MacLean said the build phase of RADARSAT Constellation is coming. “There has always been a plan to build [RCM]. It just hasn’t been officially announced,” MacLean said in a press conference, as reported by Space News. “I think you will see an announcement soon. We have a commitment from the ministry, and a plan to proceed.”
MacKay: Space Technology ‘Critical’
MacKay told reporters there is “clearly a need and a demand” for Canadian defence satellites in general, citing other programs underway such as Mercury Global. That satellite is Canada’s contribution to the multi-nation Wideband Global Satellite Communications System.
Regarding RADARSAT, he added, “There is more to do … the project is in the pipeline.” He said queries about how to preserve jobs were best left to MDA and COM DEV to answer, but said his department has several defence projects forthcoming for Canadian companies to work on.
In earlier prepared remarks, MacKay cited areas such as monitoring coastlines and Arctic surveillance as priorities for the government – things that RADARSAT Constellation is designed to do.
“Space-based technology plays an incredibly important and increasingly critical role in our world,” he said in a speech, adding, “We need outer space situational awareness just as we do on the ground.”
While space is a volatile industry – workers are hired and fired as projects start up and are completed – too long of a delay in a project is dangerous.
The employees who had the expertise can forget it over time if they are not constantly immersing themselves in the work, or they may be hired by other companies – forcing MDA and COM DEV to train new people, which takes time and money. 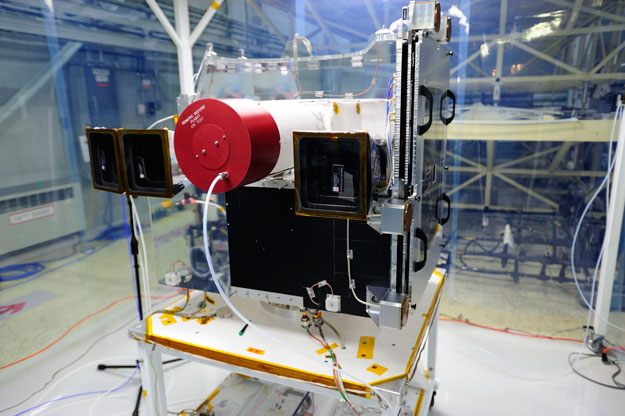 Sapphire up close.
MDA Targeting the United States
As a side note, Sapphire will be a feather in MDA’s cap as the firm works to get more business in the United States.
MDA’s planned $875-million acquisition of Space Systems/Loral, announced in June, will give the Canadian company a physical presence in the United States if the deal goes through.
With an office down south, it will be easier for MDA to bid on United States government contracts. The company is particularly interested in doing in-orbit satellite servicing and bidding for projects under consideration by NASA and the Defense Advanced Research Projects Agency.
Should Sapphire be successful in its work with the United States, MDA will be able to cite this as a reference project when bidding for new projects. However, the SSL acquisition is still under review by the United States Department of Justice, which requested more information from MDA in September concerning its satellite communications antenna and payload business.
That said, MDA is an old hand in working with the United States in other matters. Just last month, the company signed a sole-source contract with the National Geospatial Intelligence Agency. The value of the contract was not fully disclosed, with MDA only saying it will be in the millions of dollars.
Under the terms of the deal, MDA will be responsible for providing RADARSAT-2 information on icebergs, with the aim of providing charts that will assist with safe ship navigation.

Is SpaceQ's Associate Editor as well as a business and science reporter, researcher and consultant. She recently received her Ph.D. from the University of North Dakota and is communications Instructor instructor at Algonquin College.
Previous The Official Unveiling of Sapphire Canada's 1st Space Situational Awareness Satellite
Next Alouette Pioneers Celebrated at Gala Dinner