Launch Canada representatives and students test-fired a liquid-fueled LR-101 rocket engine in association with Stein Industries and other partners, successfully executing the 30-second burn with 1000 pounds-force of thrust.

“This was done as a major educational initiative for Canada’s rocketry students as part of Launch Canada,” organization president Adam Trumpour said in an interview.

It also was a chance for several companies to step in with support, Trumpour said, ranging from small donations of valves, fluid controls, welding services and machine services, to larger contributions from several companies. Frank Campion – the mayor of Welland, Ont. – even showed up, adding some publicity to the event.

Some of the major companies involved include:

Trumpour said the rocket engine firing will provide valuable student expertise as rocket competitions continue to be disrupted due to necessary safety requirements, due to the novel coronavirus pandemic.

“Launch Canada’s goal,” Trumpour added, “has always been to support the students in the broadest sense, and we’ve been thinking outside the box about how to do that even in difficult times.”

The testing arose from a personal project Trumpour has been working on for several years. He owns a liquid rocket engine test trailer and has been working on refurbishing an engine – the engine that was eventually used in the test. He decided to get the students involved out of concern that the pandemic was limiting their ability to learn space engineering.

“My test equipment was close enough to being ready that I saw an opportunity to get the students actively involved in completing, setting up and operating it, and to demonstrate a real, professional approach to advanced rocket engine testing,” he said.

“When I proposed the idea, the students loved it, so as people got vaccinated and limited gatherings became possible earlier in the summer, we kicked off an intensive, hands-on rocket engine testing event series.”

Students received hands-on experience in items such as wiring sensors, programming control and data acquisition software, and fabricating and cleaning the liquid oxygen plumbing and welding test stand structures. The last four months were particularly busy, as students worked at the test site for several days.

“We began with training, familiarization and setup, giving the students the chance to learn not just about the hardware, but also about the logistics of planning and conducting a complex operation like this in the field,” Trumpour said. “It’s easy to get fixated on the actual hardware, but designing and executing the operation is every bit as important, and it’s something that people don’t often learn in school.”

Over the months, the students gained familiarity with the equipment and operations, allowing the work to proceed to matters such as procedures, kit lists, and dress rehearsals known as “cold flow tests” in which liquid nitrogen was used to test and calibrate the systems.

Trumpour said the dress rehearsals also allowed the students to refine their procedures and build confidence, and it paid off with the full engine firing – he called it a “stunningly successful result.”

“Both the engine and the team performed flawlessly the very first time,” he noted. “Our rocket engine and its test equipment performed exactly as designed, was perfectly stable and delivered the target 1000 lbs of thrust. Often for a first test, you’ll only fire a rocket engine for a few seconds to make sure it starts properly and only increase the run time later on, but in our case it was running so well that we kept going for a full 35 seconds and could have easily gone longer.”

He said the project helped students with gaining real-world engineering experience to assist in integrating complex aerospace systems, and planning and executing operations in the field. Beyond that, attending the test in person also showed them the power of even a small engine: “I think it left quite an impression on a lot of people,” Trumpour said.

Trumpour said he hopes to do this event once a year, which will especially be valuable as Canadian companies look to get more involved in rocketry in the coming decade; his ultimate goal is to see Canadian advanced experimental rockets launch – he is already building relationships with Transport Canada on that front.

This test was a valuable first step, he added. “We already have a new rocket engine in mind for the next version of this, and a lot of this year’s students are excited to build on what they’ve learned for next time and make this even bigger and better.”

Is SpaceQ's Associate Editor as well as a business and science reporter, researcher and consultant. She recently received her Ph.D. from the University of North Dakota and is communications Instructor instructor at Algonquin College.
Previous A Moment in Time – Terranauts
Next Canadian Space Agency announces long lead time for new Human Analog Studies opportunity 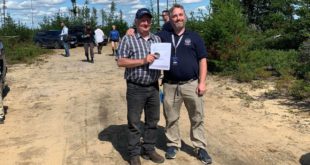 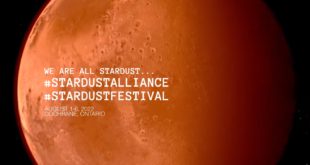