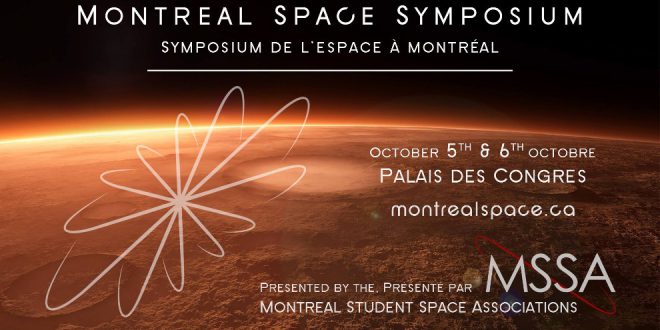 The Montreal Space Symposium is a new conference that was conceived of and organized by students. In the span of just over two months seven people from different universities pooled their efforts to organize this two day conference. The organizers brought together 12 student associations from Montreal, what they are now calling the Montreal Student Space Associations. Because they kept their costs low and managed to raise the funds they needed from the associations, registration was free and they confirmed 400 registrations with approximately 300 attending the keynote. Their 47 speakers included a sizeable contingent from the Canadian Space Agency, university professors, a handful from industry, one from the Military and of course the students themselves.

In the first segment I spoke with three of the organizers, Sandro Papais who is an engineering major at McGill University, Aliénor Lougerstay is also an engineer major, though from Concordia University, and Jan Clarence Dee who recently graduated from Concordia University with a degree in Mechanical Engineering and who now works at the Canadian Space Agency as a junior systems engineer.

In the second segment I spoke to Canadian Space Agency president Sylvain Laporte shortly after he delivered the keynote speech at the Montreal Space Symposium. In my discussion with Mr. Laporte, we spoke about the conference and also touched on some of the recent developments at the Canadian Space Agency.

Boucher is an entrepreneur, writer, editor & publisher. He is the founder of SpaceQ Media Inc. and CEO and co-founder of SpaceRef Interactive LLC. Boucher has 20+ years working in various roles in the space industry and a total of 30 years as a technology entrepreneur including creating Maple Square, Canada's first internet directory and search engine.
@marckboucher
Previous Editorial: Bill C-58 Will Make the Government Less Transparent
Next As MDA Becomes Maxar Technologies Context is King