NASA’s Space Apps Challenge engaged over 2,000 students in its first global hackathon in 2012. By last year’s edition, that engagement had grown to 26,165 participants.

The hackathon brings together students globally and is organized locally with Challenges being provided by NASA or their respective space agency. This year, the hackathon is scheduled for the weekend of October 2nd and will be held virtually again.

Kevin Murphy, NASA’s chief data officer said, “Over the last ten years, open data has been the cornerstone of Space Apps. Thanks to open innovation programs like Space Apps, the public knows that NASA’s vast data archives are freely available to browse online.”

The objectives of the Space Apps Challenge are:

In Canada, current cities that have organized and are listed on the International Space Apps Challenge website include: St. John’s, Ottawa, Hamilton, Calgary and Vancouver. There’s no doubt other cities that have participated in the past will join including Halifax, Montreal, Toronto and Kitchener-Waterloo.

Of note, the hackathon is coming to Newfoundland and Labrador for the first time. The Students for the Exploration and Development of Space (SEDS-Canada) along with Memorial University of Newfoundland (MUN) Ocean Sciences Undergraduate Society (OceanUS) and MUN Engineering Society will co-host the event in St. John’s.

The CSA was the first national space agency to join NASA’s Space Apps Challenge in 2017 and was the first to make open data available for the Challenges.

Sandra Cauffman, deputy director of NASA’s Earth Science Division said, “We are really proud of Space Apps and the way the program has engaged people from all over the world. Over the next ten years, we would like to work with our partner space agencies to expand our geographic footprint even more to include people from all regions of the world and populations that are underrepresented in the STEM fields such as women and girls.”

The most famous entry from Canada was that of SkyWatch which won the global event in 2014. Since then, its founders have taken their initial idea and turned into a significant and growing Earth Observation data business that has raised US$27.9 million to date.

According to NASA this years theme is “The Power of Ten.”

“This theme was chosen by NASA for several reasons. One, it celebrates the fact that this year’s event is the tenth annual event. Since 2012, Space Apps has grown leaps and bounds — thanks to you! Two, it reminds us that the next ten years have much in store, both for NASA and for Space Apps. Three, the theme captures some of the ways that we are celebrating the tenth annual event this year, which includes our inclusion of additional space agency partners and additional Global Awards — among other things! Read more about our theme and related activities here.”

Boucher is an entrepreneur, writer, editor & publisher. He is the founder of SpaceQ Media Inc. and CEO and co-founder of SpaceRef Interactive LLC. Boucher has 20 years working in various roles in the space industry and a total of 30 years as a technology entrepreneur including creating Maple Square, Canada's first internet directory and search engine.
@marckboucher
Previous Canadian Space Agency releases results of future space exploration activities consultation
Next Euroconsult adds Masterclass for the business professional 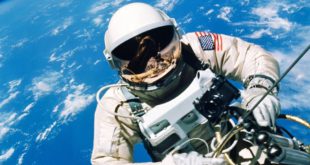