This new camera, the EMCCD (Electron-multiplying charge coupled device), is distinct in its ability to see the smallest amount of light without allowing background noise to blur the captured image. “Even if in a frame there is only one photon that has accumulated into a pixel, it will be possible to see it. This camera is the ultimate sensitivity that we can get with a single device,” says Dr. Olivier Daigle, the co-founder and Chief Technology Officer of Nüvü Camēras.

The EMCCD is a product of Dr. Daigle who is an engineer and astrophysicist by training. This camera just became the world’s first EMCCD controller to achieve the qualifications for operating in a space-like environment, meaning surviving radiation, vacuum, and the harsh environment of space. The science goals at the inception of this product were targeted for the eye of the coronagraph onboard the WFIRST (Wide Field Infrared Survey Telescope).

The WFIRST is a future space telescope aimed at surveying the sky and collecting wide field images. This telescope was recommended by the United States’ National Academy of Sciences Decadal Survey for Astronomy and Astrophysics, and formally became a NASA mission in February 2016. This mission’s main objective is to obtain a better understanding of exoplanets, dark energy, and infrared astrophysics. The field of view the sky of observed by this telescope will be a hundred times larger than images provided by the Hubble Space Telescope. Its sensitive coronagraph will be able to detect and measure properties of exoplanets.

The coronagraph instrument on WFIRST, the device used to block out the light from the Sun or other bright stars to allow for observation of fainter stellar bodies, has an imaging and a spectroscopic mode. These two modes of operation allow for direct imaging of fainter objects, such as exoplanets or debris disks around nearby stars, as well as characterizing those observed objects. The EMCCD acts as the eye of the coronagraph, and Nüvü Camēras’ new camera is set to do exactly so. “The light that comes from some exoplanets is so faint that you need this high-resolution camera to be able to see them,” Dr. Daigle told SpaceQ.

Nüvü Camēras’ EMCCD has ground and space-based applications, and the technology behind it is distinguished internationally for its extreme imaging sensitivity. “The difference between our EMCCD and a standard CCD is that for the same size telescope, it triples the planets that can get detected by this space telescope,” says Dr. Daigle. This EMCCD can be used for the detection and characterization of exoplanets, search and monitoring of asteroids and Near-Earth objects, as well as satellite tracking. This was all made possible with the support of the Canadian Space Agency and its partners in industry, helping send new Canadian technology into space.

The EMCCD will have its first flight in September 2018 as the eye of the coronagraph for the High-Contrast Imaging Balloon System (HiCIBaS) project at Laval University, led by Professor Simon Thibault. This project will fly in a Canadian Space Agency stratospheric balloon, reaching a height of 40 kilometers. These types of balloons provide the perfect opportunity to test space electronics and instruments in a space-like environment before their use in space applications. Dr. Daigle believes this will be a way to “test if the camera work in a vacuum environment, is autonomous, and is capable of gathering data that can be brought to Earth. It’s a step towards showing that this camera is ready to be used in important missions”. A second flight for this EMCCD is expected to be in 2020 from Australia.

Nüvü Camēras was co-founded by Marie-Eve Ducharme and Olivier Daigle in 2010. Their goal is to push the limits of modern imaging technology, as demonstrated by the new EMCCD. According to Nüvü Camēras they design commercially available cameras sensitive enough to allow scientists and professionals to explore things that have not yet been discovered.

The ultra-sensitive cameras were originally meant for astronomical research and space exploration. However, they are now also being used for biomedical imaging due to their precision and high sensitivity. Nüvü Camēras collaborates with government institutions, private companies, and university health centres to design diagnostic tools and create new applications for their cameras.

Nüvü Camēras will be presenting more information on their new EMCCD at the 2018 Canadian SmallSat Symposium this February, in Toronto.

Sara is a planetary geologist and science communicator with a passion for sharing the wonders of the universe with the public. Sara started writing for SpaceQ in September 2017.
@MazroueiSara
Previous Canada’s Early Deep Space Gateway Plans
Next Interviewed: Dr. Michael Daly on Canada’s Participation in the OSIRIS-REx Asteroid Sample Return Mission 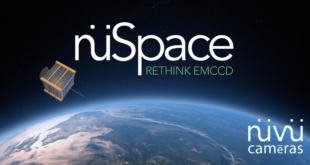