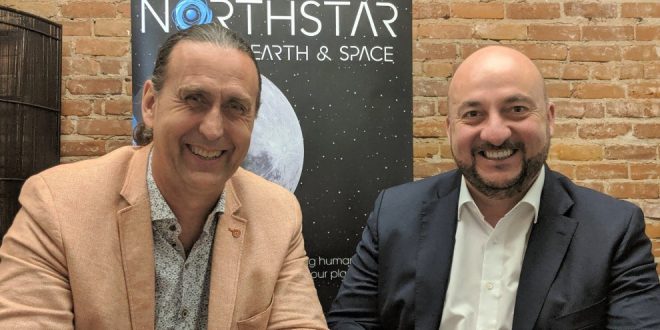 NorthStar Earth & Space which is looking to build which is looking at building a low Earth orbit (LEO) constellation of 40 satellites has signed a cooperation with the government of Luxembourg.

The agreement would see the implementation of a Clean Space initiative for sustainability in space.

According to the press release issued jointly by NorthStar and the government of Luxembourg “the Clean Space initiative would evaluate the use of NorthStar Earth and Space Information services with the support of Luxembourg’s insurance, financial and satellite operator communities to address some of the key issues related to space traffic management, sustainable commercialization of space activities, insurance products for space operations to promote growth in commercial space activities, and satellite operational challenges.”

NorthStar is trying to build what it calls “the world’s first comprehensive Earth and Space information services platform.” The company believes that data from LEO satellites are critical to track orbital objects from space-based sensors for Space Situational Awareness to maintain a safe orbital space environment for everyone . As well, they believe Earth Observation satellites in LEO are critical for acquiring data about the Earth to help sustain a healthy planet.

Their satellites, which are larger than the typical LEO small satellite we think of today, would have hyperspectral, infrared and optical sensors.

Stewart Bain, CEO of NorthStar Earth & Space, said of the agreement “NorthStar is honoured to have the visit of Deputy Prime Minister Schneider. NorthStar and its international partners are pleased to collaborate with Luxembourg to enable the sustainability of our environment in space with the global Clean Space initiative. Luxembourg is uniquely positioned to provide value-added services within the insurance and financial industry and home to many satellite companies who will benefit from this project.”

Étienne Schneider, Deputy Prime Minister and Minister of the Economy of Luxembourg said “the proposed cooperation with NorthStar is in line with Luxembourg’s efforts in developing high-fidelity space situational awareness to protect the space environment beyond our planet and in promoting earth observation to better understand the complexity of our planet and monitor its health. Both fit perfectly into our national data-based innovation strategy that aims at building a sustainable and reliable digital economy.”

NorthStar has raised $86 million in funding so far.

Boucher is an entrepreneur, writer, editor & publisher. He is the founder of SpaceQ Media Inc. and CEO and co-founder of SpaceRef Interactive Inc. Boucher has 20 years working in various roles in the space industry and a total of 28 years as a technology entrepreneur including creating Maple Square, Canada's first internet directory and search engine.
@marckboucher
Previous Sarah Gallagher on Leveraging Science for Innovation
Next Macfab Will Support the Launch Canada Challenge Rocketry Competition

EarthDaily grows satellite and analytics businesses in year after rebirth