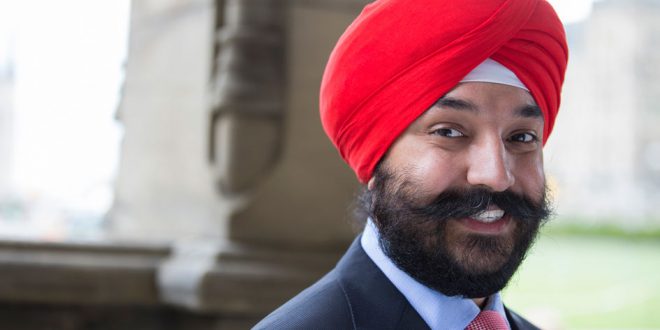 Just two weeks after being sworn in as Canada’s new Minister of Innovation, Science and Economic Development, the Honourable Navdeep Bains, delivered his first keynote speech at the annual Canadian Aerospace Summit organized by the Aerospace Industries Association of Canada.

Having just been on the job for two weeks, and with a monumental portfolio to get up to speed on, it would be difficult to expect much in the way of substance from the new minister.

However, the fact that the riding he represents includes Toronto’s Lester B. Pearson airport and is home to many aerospace offices, indicates the minister will not only be a strong advocate for the aerospace sector, but will also be very engaged with it.

The Minister touched on a variety of topics including the Emerson report and indicated that “rather than reading the 25 recommendations, I thought I would call Mr. Emerson instead.”
He also stated he would review what recommendations still needed to be implemented from the report.

The Minister did mention space, citing Canada as being well known “for its world-leading expertise in satellite communications, robotics and earth observation.”

Earth Observation will be an area that the new government will have a renewed focus on if comments by Marc Garneau earlier this year at conference in Toronto are any indication. Earth

Observation will be discussed in detail at a session at the upcoming Canadian SmallSat Symposium being held in Toronto in early February.

Below is the full text of the Ministers speech.

First off, I would like to thank Jim Quick and his team at the Aerospace Industries Association of Canada for inviting me to speak today.

I know the Association has been a tremendous partner of the Government of Canada, and I look forward to continuing that dialogue in the weeks and months ahead.

Let me open by underlining the commitment our government has made to changing the tone of how we communicate and interact with Canadians by being more open and transparent.

You saw that change in action last week as the Prime Minister shared with you and with all Canadians the mandates he gave to me and to my Cabinet colleagues.

It’s about openness and transparency.

It’s also about performance and results.

Releasing those letters strongly reinforces our intention to implement the platform we put forward during the election campaign.

Our government is focused on outcomes that will benefit the country.

Moving forward, my primary role is to represent all Canadian industry, including the aerospace and space sectors, at the Cabinet table.

And it is a pleasure and honour to make my first address as Minister of Innovation, Science and Economic Development to the aerospace and space industries.

I think there are some important signals in the name change for my department.

In today’s world, innovation and science performance are critical drivers of economic growth.

The name change of the department recognizes this, placing a deliberate importance on innovation and scientific discovery and their equal importance for economic development, nationally and across all regions of Canada.

I have been busy talking with industry leaders in Canada and with my counterparts in other governments, and I am confident we are on the right track.

I’m hearing whole-hearted agreement that to build a prosperous Canada, we need to look at the whole flow from science and innovation to growth and economic development.

As minister, I have that commitment to achievement in innovation, science and economic development in my title.

Minister Duncan is with me to ensure science and basic discovery get their full due.
Minister Chagger supports me on the innovation side, especially in relation to small business, start-ups and tourism.

I want to make it clear: we are all a team working for Canada and are committed to success.

I have some personal attachment to the world of aerospace.

The riding I represent, Mississauga-Malton (which, as I have been arguing with my colleagues, is the best riding in the country), is rich in aerospace history. It was the home of the famous Avro Arrow airplane, Canada’s first supersonic aircraft, once considered one of the most remarkable planes in history and ahead of its time in design.

My riding is also home to Canada’s busiest airport, Lester B. Pearson airport.

This has had a great influence on the area, and Canada’s second-largest aerospace hub has grown up around it.

Many of Canada’s aerospace firms are there, including some of its best-known names and emerging companies, which might not be household names, but are well known in your industry.
Unfortunately, I have seen first-hand some of the hard times and job losses in the manufacturing sector.

My commitment to you is to work with you to continue to create highly skilled jobs and strengthen the Canadian manufacturing sector, including aerospace and space.

These are early days on the job. I am focused on deepening my understanding of your industries and what’s important to you. We will work together on many fronts, and I want your advice on how our government should best engage with your industries as we go forward.

We will not agree on everything.

But I believe strongly that we have many interests in common and that by working together we can advance these interests to benefit all Canadians.

I have the Emerson report on my desk. Rather than reading the 25 recommendations, I thought I would call Mr. Emerson instead.

I am aware of the work that the Association and its members did with Mr. Emerson on the Review of Aerospace and Space Policies and Programs.

I’m impressed by what has been accomplished, and I’ll review what remains to be implemented.
The aerospace and space industries are clear innovation leaders in Canada, and your commitment to collaborative research and development excellence sets you apart.

However, I recognize the magnitude of the challenges and opportunities facing your sector.
Together, you enjoy a well-earned global reputation.

Thanks to you, Canada is seen as a world leader in civil flight simulation and the production of civil aircraft, small engines and landing gear.

In the domain of space, Canada is well known for its world-leading expertise in satellite communications, robotics and earth observation.

Further, you know this, but it’s worth mentioning: the aerospace industry contributed more than $29 billion to GDP in 2014, and you continue to experience a strong growth.

These successes are a tribute to your leadership. I want you to know that I also appreciate the ongoing partnership between your industries and the federal government. This relationship has many dimensions, including:

As you know, my mandate letter makes specific reference to identifying industrial benefits for Canadian firms.

Let me say a few words about my role in promoting industrial outcomes from defence acquisitions and how important this is to me.

Working closely with Minister Sajjan and Minister Foote, I will be focused on how such acquisitions can contribute to growing business, promoting innovation and advancing exports, which will all serve to improve Canada’s economic position.

You can count on me to play an active role on your behalf.

Your sector supports economic activity across the country, including 180,000 jobs. And most of these jobs count as skilled labour. I know how much value there is in the industry, both in my own riding and across the country.

Many of your sector jobs are located in the Montréal area–the third-largest aerospace cluster in the world–but I know your industry is important across Canada.

Western Canada, Central Canada and Atlantic Canada all play important roles as well, in key areas such as manufacturing, maintenance, repair and overhaul.

Your sector is highly competitive, and retaining and growing our footprint is vital. I look forward to working with you on that aim.

Yours is a global industry and you have to constantly prove yourselves.

I understand that the pressure to bring prices down while bringing quality and volume up is becoming increasingly intense.

I can see how emerging economies represent new potential customers but also competitors.

I have heard that risk sharing and involvement in the development process is now becoming spread across supply chains.

And I appreciate that many of the investment decisions you have to make carry high costs and significant risk and require a financial time horizon that extends for many years.

Finally, I understand the increased pressure you face to collaborate, scale up and demonstrate your ability to take on global work.

Your industry faces pressure to innovate in light of global competition, and you must regularly reinvest.

I know that innovation is incremental and required throughout the supply chain.

I also understand your sector has a strong tradition of working together on technology capability. I applaud these efforts and urge you to continue on this path.

We need to think globally.

It will be key to position Canada as a strong supplier in the global aerospace and space supply chains and continue to demonstrate Canada’s world-class capabilities.

In my new role, I will look at how I can help you to promote exports.

Your companies export nearly 80 percent of what they make. And it may surprise many Canadians to learn that while much of this takes the form of exports of aircraft or satellites, even more goes into supply chain work that ultimately ends up on aircraft or space systems made all around the world.

Similarly, I’m committed to working with the space industry and stakeholders to identify where high-value opportunities exist and to develop an approach for future directions that ensure the long-term health and sustainability of the industry.

Today, I want to convey to you that the Government of Canada will continue to be a strong and committed partner.

It is the job of government to foster a supportive business climate, open up international markets, invest in infrastructure and work to spur innovation and investment.

And this is reflected in our mandate letters.

You have seen my mandate letter.

You know what’s on my “to do” list to implement the commitments we made to Canadians.

One of my early priorities is to create an innovation agenda, which will clearly articulate our policies and make important investments that will help businesses invest, diversify, innovate and export so that they can create jobs and wealth.

Moving forward, this will mean I will work to strengthen the partnership with many players.

Business will obviously play a key role in this, along with universities, colleges and polytechnics, as well as all of the other levels of government.

And all this work will of course mean active collaboration and engagement.

As I said at the outset, our government will be open and transparent in its approach to implementing the commitments that we have made.

Our focus will be on results and ensuring the outcomes we believe will enhance economic growth and have the greatest positive impact on the lives of Canadians.

My overarching goal is to help Canadian businesses grow, innovate and export so that they can create good quality jobs and wealth for Canadians.

And I will do this actively and together with my Cabinet colleagues, since I know that the issues you confront rarely organize themselves along departmental lines.

Let me conclude by saying that I look forward to our continued work together on the issues you face and to finding the solutions to help grow Canada’s world-class aerospace and space industries.

Thank you very much.

Boucher is an entrepreneur, writer, editor & publisher. He is the founder of SpaceQ Media Inc. and CEO and co-founder of SpaceRef Interactive LLC. Boucher has 20+ years working in various roles in the space industry and a total of 30 years as a technology entrepreneur including creating Maple Square, Canada's first internet directory and search engine.
@marckboucher
Previous COM DEV Reportedly up For Sale
Next Neptec Awarded Phase A Contract for Space Station Dextre Deployable Vision System 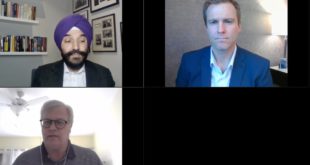