GOSAT-2, which the Japanese refer to as IBUKI-2, is the second GOSAT satellite launched. The first was launched in 2009.

According to Japan’s Aerospace Exploration Agency (JAXA), the GOSAT-2 “aims to gather observations of greenhouse gases with higher levels of accuracy via even higher-performance onboard observation sensors. The project will serve to provide observation data to environmental administrations and drive international anti-global warming efforts.”

Onboard the satellite is an ABB built interferometer. ABB says the same technology “is used on the ground for continuous emissions monitoring from industrial sources”.

In a press release Marc-Andre Soucy, Space and Defense Systems Director at ABB Measurement & Analytics Business Unit, said “ABB is very proud of its involvement in the development of GOSAT-2. This second satellite relies on the heritage of GOSAT-1, a highly successful satellite in orbit since 2009. ABB has provided technologies for the Japanese space program for over 20 years, and contributed to several other high profile space misions like JPSS, NPP, Meteosat, IASI, SciSat, MetImage and more. All these contribute to a better understanding of our planet, and help overcome climate change challenges.”

The press release went on to say “GOSAT-2 orbits the Earth 15 times a day at an altitude of 613 km. Over a 6-day period, the satellite undertakes a complete mapping of the globe, taking over 100,000 precise measurements of the total methane, water vapor, carbon monoxide and carbon dioxide in the Earth’s atmosphere. These greenhouse gases (GHG) and vapor prevent the earth from effectively radiating heat into deep space thus resulting in an increase in global surface temperature.”

Boucher is an entrepreneur, writer, editor & publisher. He is the founder of SpaceQ Media Inc. and CEO and co-founder of SpaceRef Interactive LLC. Boucher has 20 years working in various roles in the space industry and a total of 30 years as a technology entrepreneur including creating Maple Square, Canada's first internet directory and search engine.
@marckboucher
Previous The Early 1980’s: What’s in Canada’s Long Term Space Plans? Part 2
Next This Years Space Security Index Has Been Released and Calls for Leadership 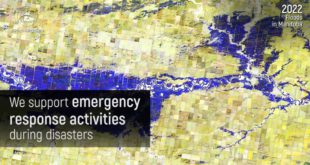