Space ignites the imagination. The most recent SpaceQ podcast quoted CSA president Sylvain LaPorte, telling the audience about how a gymnasium full of kids will absolutely light up when they see an astronaut walk into the room, and how stories of hometown astronauts inspire kids to look to space for their own future careers. Fiction is no different: whether it’s television shows like Gene Roddenberry’s Star Trek, or print science fiction like Issac Asimov’s Foundation, Arthur C. Clarke’s Rama, or Iain M. Banks’ Culture, millions of people are inspired by tales of our future in the stars.

This crosses time and mediums. Space travel in literature goes back to the 18th century. It goes back to the very beginnings of television, comics, and movies. It even inspires popular music. But at the close of the 20th century and the opening of the 21st an new storytelling medium has arisen: electronic gaming. While games used to feature primitive stories at best, they’ve slowly gained critical respect and fiercely loyal fandom. Just like film and television before them, games have become—ever so slowly—a respected narrative medium.

But one company has stood tall as the standard-bearer for speculative storytelling in gaming: BioWare…and BioWare is far more important to Canadians than you might think.

BioWare is often credited for the rise of storytelling in gaming. Beginning as the developers of the beloved Baldur’s Gate series of Dungeons & Dragons-based role-playing games (RPGs), they rocketed into true stardom with Knights of the Old Republic (KOTOR), a streamlined, accessible game set deep in Star Wars’ past.

KOTOR was a revelation. KOTOR’s characters were like nothing anybody had seen before: three dimensional, relatable people with ambitions, fears, and inner conflicts. Both the protagonist and the story dynamically changed and morphed to fit the player’s choices. The fact that it wasn’t just an excellent story, but an excellent Star Wars story, was the icing on the cake.

But while space settings are common enough in gaming, going all the way back to the original electronic game, SpaceWar, classic space-based “hard SF” storytelling has been notably rare. BioWare’s own games, like most of those in gaming, were either fantasy or “science fantasy” settings like D&D or Star Wars. The space exploration and discovery that has ignited imaginations for decades in SF has had a surprisingly small role in gaming, and “hard SF” was rare in general.

BioWare changed all that with Mass Effect.

Mass Effect was different: a sprawling interstellar space opera with feature-film-quality music and visuals, deep characterization, and a powerful hook: a multi-game storyline that dynamically reacted to player choices. Early decisions made by Mass Effect’s protagonist, “Commander Shepard” could have decided the fate of entire species by the time the full story was told. And all this was built on a detailed vision of spaceborne humanity as plausible as anything written by Asimov, Clarke, or Banks.. It was interactive SF storytelling on a level that nobody had ever seen, and only BioWare could have pulled it off.

The games were enormously successful. They sold tens of millions of copies, routinely top critics’ “best game ever” lists, and cemented BioWare’s reputation as the greatest genre storytellers in the medium. Mass Effect inspired fierce loyalty, captured players’ imaginations, and has kicked off a new era in SF storytelling in gaming. Many of the award-winning gaming narratives of 2017—like Prey, Nier: Automata and Horizon: Zero Dawn—are exactly the sort of “hard SF” that Asimov and Clarke would approve of. And while this year’s Mass Effect follow-up, Mass Effect: Andromeda disappointed some fans, it was mostly because of the high standards the previous series had set.

What you might not know is how much Mass Effect is a thoroughly Canadian production, by a thoroughly Canadian company. BioWare began as a collaboration between three Albertan medical doctors: Ray Muzyka, Greg Zeschuk, and Augustine Yip, who decided to take their money from medicine and put it towards game design. KOTOR and Mass Effect director (and current BioWare General Manager) Casey Hudson is Canadian, and so is Senior Creative Director James Ohlen. Also Canadian: Drew Karpyshyn and Mac Walters, the two senior writers for the Mass Effect series. Through BioWare was eventually acquired by Electronic Arts, and has expanded its studios internationally, BioWare’s main studio continues to be in Edmonton, Alberta, and still uses the same Canadian name that inspires fervent international loyalty.

This was reflected in the work. Canadian television and film production is notorious for hiding their Canadian identity, and Canadian settings barely exist in gaming. BioWare, however, deliberately chose Vancouver as the earth-side home of humanity’s space forces, and were clear that they did it because it’s a Canadian city. One of the characters that accompanies Shephard throughout the series, Kaiden, is revealed to be Canadian, and the two voice actors for the male and female versions of Shepard, Mark Meer and Jennifer Hale, are both Canadians. Some scholarly work has even suggested that Mass Effect is an elaborate allegory for “historical Canadian wartime experiences”.

This is why BioWare is important. Science fiction inspires the passion and drive that motivates people to want to explore the stars, and Canadian SF will inspire upcoming Canadian talent to devote their skills to space. Famous Canadian SF media like Lost Girl and Orphan Black are thoroughly terrestrial, though, as are Canadian-directed movies like Arrival and Bladerunner 2049. And while Canada is a world leader in game development, with a host of excellent game studios, almost all of them are subsidiaries of international corporations that carefully hide their Canadian identity.

And yet. Meer, Hudson, Hale, Karpyshyn, Ohlen…it was a bunch of Canadians that brought space back to the forefront of interactive storytelling. Edmonton’s own BioWare, a name so revered that it’s one of the few EA studios that kept its own name and identity after acquisition, pointed the way forward. By sales, revenue, brand value and mindshare, BioWare’s Mass Effect is possibly the most popular, most influential, work of Canadian “hard” science fiction ever made.

It’s something small, but real, that Canadians can take pride in. Our work in both tech and media is often overshadowed by our international counterparts, and even when we do excel, we’re often forced to hide that excellence behind veils and masks. But BioWare shows how Canada will proudly “punch above its weight” in nontraditional storytelling media like gaming. That’s how we’ll ensure that Canadian storytellers continue to inspire.

Craig started writing for SpaceQ in 2017 as their space culture reporter, shifting to Canadian business and startup reporting in 2019. He is a member of the Canadian Association of Journalists, and has a Master's Degree in International Security from the Norman Paterson School of International Affairs. He lives in Toronto.
Previous The Top Five Canadian Space Stories of 2017
Next Significant Events in Canadian Space for 2018 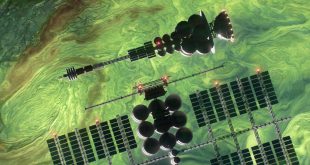