First Spacewalk of 2018 Almost Goes by the Book

The first of two scheduled spacewalks by astronauts on the international space station went almost by the book and succeeded in replacing an aged Latching End Effector on the Canadarm2.

Spacewalks are choreographed down to the exact turn of a bolt. So when NASA’s spacewalk commentator noted that NASA astronauts Mark Vande Hei and Scott Tingle were progressing well in their list of tasks to replace the B Latching End Effector (LEE) on the Canadarm2, one might assume everything would proceed smoothly.

The spacewalk was targeted at lasting six and half hours. It took seven hours and 24 minutes. Everything did go smoothly until astronauts attached the new LEE on the Canadarm2. It was it turned out, a small glitch.

Once attached, the new LEE was not communicating properly with the rest of the systems on the Canadarm2. But the astronauts when through the process of unscrewing the bolts that hold the LEE to the Canadarm2 and doing the procedure again. This included powering down the Canadarm2.

In doing the procedure over again they had to once again precisely turn the bolts a number of times. Then the systems would need to be powered back on and mission control would check to see if the LEE was properly communicating with the rest of the Canadarm2. The second time did the trick, and all systems were communicating properly.

The astronauts then completed the rest of the procedures and were done. A second spacewalk related to this work will be performed on January 29.

NASA reported that “the spacewalk was the 206th in support of space station assembly and maintenance, the third in Vande Hei’s career and the first for Tingle. Vande Hei will venture outside the station again Jan. 29 with Flight Engineer Norishige Kanai of the Japan Aerospace Exploration Agency (JAXA) to stow a spare latching end effector removed from the robotic arm last October on to the station’s mobile base system rail car for future use.”

NASA condensed the seven plus hours of the spacewalk into the following 10 minute highlight video.

Boucher is an entrepreneur, writer, editor & publisher. He is the founder of SpaceQ Media Inc. and CEO and co-founder of SpaceRef Interactive LLC. Boucher has 20 years working in various roles in the space industry and a total of 30 years as a technology entrepreneur including creating Maple Square, Canada's first internet directory and search engine.
@marckboucher
Previous It Takes Two Crazy Things to Create Twisted Repeating Fast Radio Bursts
Next ICEYE Looks to Disrupt Synthetic Aperture Radar Satellite Market 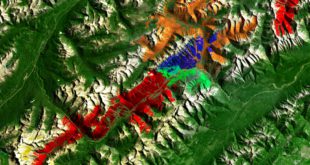