Their new web series, Deep Six, depicts humanity’s first interstellar deep space expedition as it plunges into crisis. This isn’t an unfamiliar premise. But unlike most modern science fiction (SF), Deep Six was made under tight budgetary and time constraints: a labour of love funded almost entirely through crowdfunding campaigns on Kickstarter and IndieGoGo.

Thanks to crowdfunding savvy and a well-designed campaign, they were wildly successful, hitting both their crowdfunding targets and their Kickstarter stretch goals. Between their crowdfunding and some Canadian government support, they were able to buckle down and get their first season of six episodes made. Backers eagerly awaited Deep Six— and on March 3rd, they finally got to see the show’s first six episodes, along with production footage, cast videos, detailed question & answer sessions, and a loose afterparty.

Reality, humility, and efficient use of resources

Davin and Mika’s backers stream had an homey and intimate feel—shot as it was in Davin’s basement. Backers saw Lengyel and Collins’ careful use of limited resources: the development of the humble warehouse that served as their main soundstage, the overall process of set design and creation, and an in-depth look at the construction of their claustrophobic spacecraft interior. At one point, Davin had to rush upstairs to get the hard drive that contained episode 4 while Mika stalled; at another, a video phone call with co-star Michelle Morgan featured an impromptu cameo by Morgan’s winsome young son. Davin and Mika proudly ran local news stories featuring curious onlookers at their Arizona location shoot.

It was all charmingly lo-fi, and brought the production down to reality.

When you see Deep Six, you realize how much this sense of reality and humility was reflected in the show itself. Due to these budget constraints—and its commitment to using real effects, models, and physics—Deep Six has a sense of reality, solidity, and simplicity to it that is far removed from the multimillion-dollar CGI extravagances that dominate both the big and small screens these days.

The sets of Deep Six are small, austere and often cramped, looking like the far-future version of a submarine or small naval vessel. The spacecraft cockpit that features in many scenes is so tight that the pilots can barely move around, and so stuffed with old-school physicality that you can hear the “chunk” sound of physical buttons being pressed and switches being toggled. Advanced AI’s have the tough housing of an EMT’s laptop.

It’s very reminiscent of the shoestring screen-based science fiction of the sixties and seventies, complete with a retrofuturist aesthetic that will be familiar to anybody who’s seen works like Logan’s Run, THX 1138, the original Battlestar: Galactica and Doctor Who series, or even the original Alien movie.

Hard SF where space is the danger

The premise for Deep Six is just as streamlined, and could have come from the bibliographies of hard-SF greats like Isaac Asimov or Arthur C. Clarke. A generation after discovering life under the seas of a water world in Tau Ceti, humanity mounts a deep-space expedition using a faster-than-light link called the Terminal to study and understand it. After a brief in media res moment involving Nemain (Mika Collins) crash-landing on an alien planet, the story picks up with a mysterious accidental explosion at the Terminal that leaves the expedition completely stranded, their best pilot (Tahmoh Penikett) dead, and all life in Tau Ceti in danger of accidental annihilation…including them.

Almost uniquely for modern science fiction—and what make it feel like classic SF—the dangers faced by Deep Six aren’t really from malevolent outsiders or insiders. The danger is space itself. The mantra of Deep Six is “Space is Hard”, and over the course of these six episodes, that lesson gets nailed down over, and over, and over again. Characters struggle and suffer not because of malice, but because of the realities of limited resources, absolute isolation, irreplaceable equipment, spaceborne debris, and even fuel-weight restrictions that will be familiar to people who are knowledgeable about modern-day space. They even use chalkboards instead of touchscreens: as Davin explained in the Q&A, they have a ready supply of regolith “chalk”.

Combined with the extraordinary attention paid to the physics and mechanics of spaceflight—as SpaceQ discussed in our earlier coverage, they worked closely with renowned Canadian astrophysicist Dr. Jaymie Matthews—the “Space is Hard” premise will be a treat to viewers who enjoy classic hard SF, or even realistic space dramas like Apollo 13. They even get the “no sound in space” thing right.

Deep Six’s gender diversity reinforces that anchor to reality, and brings it back to the present day. Thanks to the gender-diverse writing room and engaging performances by Collins, Morgan and co-star Katherine Gauthier, Deep Six sells a future where gender equality in space is the norm, as well as diversity of sexual orientations and nationality. Just as today—and unlike many SF works of the past—women are pilots, administrators, doctors, and crusading scientists. They have triumphs and failures, make mistakes and solve problems. They can even be endearingly obnoxious: one standout performance, by Ginger Ruriko Busch as brilliant mission specialist Eddina Written, features the most pugnacious scientist this side of Bones McCoy.

Davin and Mika were quick to point out that “Eddie” was a deliberate female interpretation of a commonly male archetype. They wanted to ensure that gender diversity in the future of Deep Six isn’t just commonplace: it’s mundane.

In fact, the greatest issue with Deep Six is simply that there isn’t more of it. Unsurprising for a show made for a shoestring budget, it’s really short, spanning only six ten-minute episodes. It covers a lot of ground in that time, with distinct character arcs for both leading and supporting characters and significant plot momentum. The show is as efficient with time as it is with money; every moment serves a purpose. But it also means that those character arcs and setting development moves at a breakneck pace, with significant time skips between and within episodes. Deep Six barely has time to breathe.

Yet, even with all of that, the show still feels like it’s just starting, with a cliffhanger revelation that opens the way for a true story that we don’t see…and may never see.

Mika and Davin freely acknowledged this in their Q&A. They’re looking for institutional funding, and have a much larger plan for Deep Six. They have at least fifty episodes planned out. These episodes are as much a pilot as anything else. As a pilot, Deep Six’s blend of retro aesthetic, hard science fiction storytelling, and modern gender diversity stands out. As a work on it’s own, all those solid elements just leaves me wanting more.

That’s never a bad thing, and certainly better than the alternative. This was a heroic achievement. But, yes…I want more Deep Six.

Craig started writing for SpaceQ in 2017 as their space culture reporter, shifting to Canadian business and startup reporting in 2019. He is a member of the Canadian Association of Journalists, and has a Master's Degree in International Security from the Norman Paterson School of International Affairs. He lives in Toronto.
Previous NanoRacks Contracted for Canadian CubeSat Project Launches
Next The AlbertaSat Group is an Example of How Students Can Contribute to and Grow Canada’s Space Capabilities 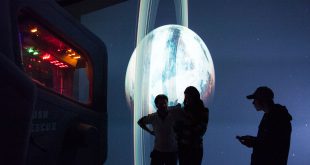