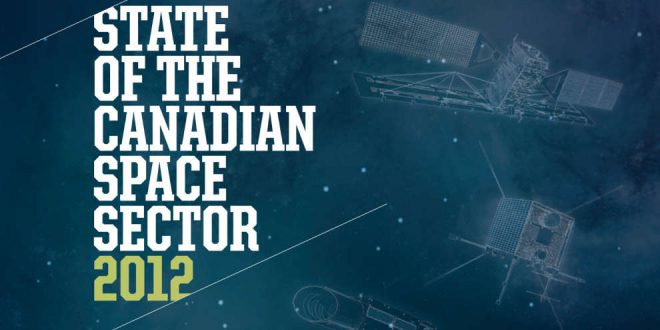 CSA Releases State of the Canadian Space Sector for 2012

The Canadian Space Agency (CSA) has released its annual State of the Canadian Space Sector for 2012. The report, 24 pages in length, notes a decline in overall revenues of 4.5% from the previous year with total revenues coming in at $3.327 billion.

From the Executive Summary

Domestic revenues decreased by 4.1% and exports decreased by 4.9%. According to the report several large space industry companies and universities experienced a decrease in revenues.

Domestic revenues amounted to $1.743B, a decrease of 4%. Non-governmental sources of revenue, at 80%, continued to make up the majority of domestic revenues. The remaining 20% of domestic revenues were derived from Canadian governments (federal, provincial and municipal), most of which is federal funding, notably from the CSA and the Department of National Defence.

Export revenues in 2012 decreased for the second year in a row, totalling $1.584B (a decrease of $81M over 2011). Ontario and the Prairies were the most affected by declining revenues in absolute dollar terms. However, Ontario continues to hold the majority of Canada’s space export market with a 56% share of Canadian space-related export revenues.

The Canadian space sector workforce experienced 7% growth over the previous year, gaining 499 positions across the country and bringing the total space-related workforce to 7,993. Of the total workforce gain, the majority of positions were classified as highly qualified personnel (HQP): scientists, engineers and technicians.

With respect to the sectors surveyed, earth observation made considerable gains, amounting to 19%, or $52M, with the sector now attaining a total of $322M in revenues.

Revenues derived from manufacturing have increased by $11M over last year, currently amounting to $691M of total space-sector revenues.

Defence-related revenues increased by $64M in 2012. Defence revenues represented $200M of total revenues, of which $142M were export related and $58M were domestic.

Boucher is an entrepreneur, writer, editor & publisher. He is the founder of SpaceQ Media Inc. and CEO and co-founder of SpaceRef Interactive LLC. Boucher has 20+ years working in various roles in the space industry and a total of 30 years as a technology entrepreneur including creating Maple Square, Canada's first internet directory and search engine.
@marckboucher
Previous The Royal Astronomical Society of Canada Announces 2014 Award Recipients
Next XPAntarctik to Test Astroskin for the Canadian Space Agency