There’s nothing routine about launch and spaceflight. For two Canadian nanosats, CanX-4 and CanX-5, the June 30th launch aboard an Indian rocket proved a challenge. But just over a month into the mission the team of engineers from the University of Toronto Space Flight Laboratory have completed some notable firsts.

With a primary mission of demonstrating of on-orbit formation flying, which for this mission meant having the two satellites controlling their position and orientation with respect to one another, the first challenge came when it was time to integrate the satellites with the rocket. A change in plans meant the two nanosats couldn’t be integrated on the rocket as expected. Instead of the two being joined together for launch and then separated in space afterwards, the two spacecraft were mounted separately and ejected separately.

Illustration of the CanX-4 & -5 nanosatellites – shown in opposing views. Credit: UTIAS/SFL.
Grant Bonin, the mission manager, said “due to launch vehicle constraints, the two spacecraft ended up being mounted to the launch vehicle and ejected separately, meaning we had to get them commissioned quickly and then pilot them back together. Fortunately, we had both satellites fully up and running within the first several days following launch, and we began maneuvering shortly thereafter.”
Bonin believes that his team achieved some notable first on this mission already. These firsts include orbit acquisition and phasing maneuvers which, to their knowledge, has never been done on the nanosatellite scale before.
“Already in this initial drift recovery phase, we’ve performed several maneuvers, planned on the ground and executed autonomously in orbit, that have adjusted CanX-5’s semi-major axis to within meters of what was planned,” said Bonin. “This is quite exciting at this scale of satellite, and it and demonstrates the capability to perform orbit acquisition and constellation management even with the smallest spacecraft.”
Mission Objectives:
– Demonstrate the autonomous achievement and maintenance of several dual satellite formations
– Demonstrate carrier-phase differential GPS techniques to perform relative position determination measurements with accuracies of 10 cm or less
– Demonstrate sub-meter position control
– Develop and validate fuel efficient formation flying algorithms
– Demonstrate enabling technologies, such as Canadian Advanced Nanosatellite Propulsion System (CNAPS) and the S-band Inter-satellite Link (ILS)
Within 24 hours after launch both the CanX-4 and CanX-5 had their GPS and inter-satellite communications running. They then calculated their position and velocity and once the attitude control systems had been commissioned they signaled CanX-5 to perform a series of maneuvers to close the gap between the two satellites and prepare them for their formation flying tests. 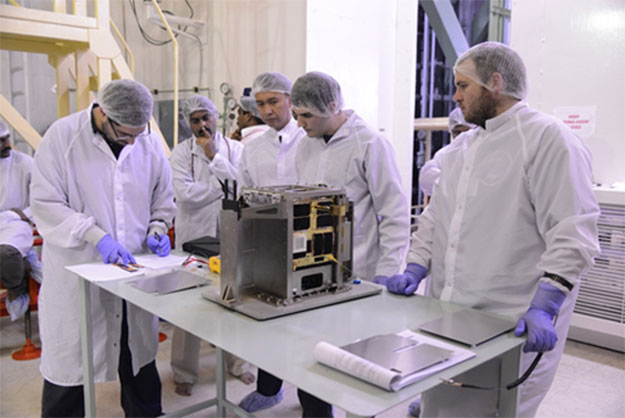 (Left to right, foreground) Mission Manager Grant Bonin, Propulsion Engineer Ben Risi, and Systems Engineer Scott Armitage preparing for launch vehicle integration. Credit: UTIAS/SFL.
Within the next month the spacecraft will be within 5 kilometers of each other and will begin a series of tightly-controlled formations to demonstrate high-precision formation flight.
Both satellites use the modular Generic Nanosatellite Bus (GNB) developed at the Space Flight Laboratory.

Boucher is an entrepreneur, writer, editor & publisher. He is the founder of SpaceQ Media Inc. and CEO and co-founder of SpaceRef Interactive LLC. Boucher has 20+ years working in various roles in the space industry and a total of 30 years as a technology entrepreneur including creating Maple Square, Canada's first internet directory and search engine.
@marckboucher
Previous UrtheCast Releases First Images of Canada
Next Open Space Orbital Crowdfunded Campaign Falls Short