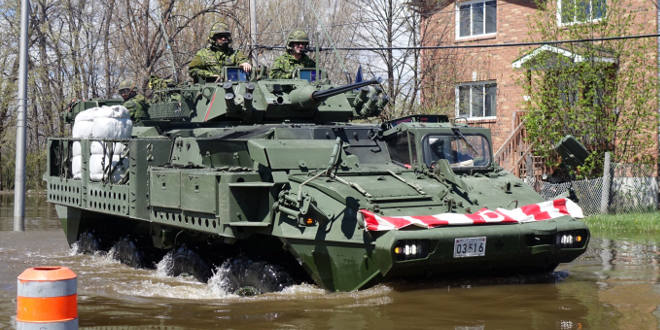 The military is out surveying the worst hit spots in Gatineau to figure out where the most help will be needed during clean up #flooding2017 https://pic.twitter.com/shcq46HHBr. Credit: @AshleyBurkeCBC/Twitter.

Ontario and Quebec have been hit hard by spring flooding and the Canadian Space Agency (CSA) is helping by providing emergency responders with satellite imagery from Canada’s own RADARSAT-2 and from other international satellites as part of the International Charter, Space and Major Disasters.

In a statement released by the CSA they say “the Canadian Space Agency has submitted, on behalf of Public Safety Canada, priority orders for 27 RADARSAT-2 images since April 20, 2017, to support flood monitoring around the Ottawa/Gatineau area, the Richelieu River, Lac des Deux Montagnes and Lac St-Pierre. RADARSAT-2 images are used by the Emergency Geomatics Services (EGS) of Natural Resources Canada.”

“The International Charter on Space and Major Disasters is a joint effort to put space technology at the service of rescue and emergency responders in the event of a major disaster. When the Charter is activated, its members make satellite images of devastated regions available to support relief efforts. With reliable and accurate information, response teams are better equipped to save lives and limit damage to property, infrastructure and the environment. The Canadian Space Agency is a founding member of the Charter.”

Our thoughts are with those affected by severe flooding in QC and ON. CSA is providing satellite data. https://t.co/0uz88rtmmy #QuebecFloods pic.twitter.com/rsWftrrsi3

An area that suffered extensive flooding in October is again under water today. pic.twitter.com/JDAs8VMadU

Boucher is an entrepreneur, writer, editor & publisher. He is the founder of SpaceQ Media Inc. and CEO and co-founder of SpaceRef Interactive LLC. Boucher has 20+ years working in various roles in the space industry and a total of 30 years as a technology entrepreneur including creating Maple Square, Canada's first internet directory and search engine.
@marckboucher
Previous MDA Restructuring Continues With Workforce Reduction and Creation of a New Company
Next Publishing Schedule for the Week of May 15, 2017