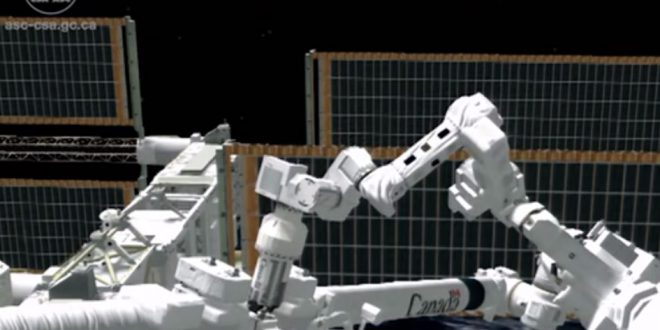 Over the next 7 days, Dextre, the Canadian Space Agency’s (CSA) robotic handyman aboard the International Space Station (ISS), will perform the first robotic self-repair in space.

Dextre will replace two cameras on Canadarm2 and the mobile base, which together form the three main components of Canada’s Mobile Servicing System. The operations, including preparation and replacement of the cameras, can be followed live on Twitter and Ustream. They will take place between May 22-29, with the main work scheduled for May 23 and May 27.

In addition to repairing and replacing two valuable cameras used for robotic operations, Dextre’s task has far-reaching implications for what robots could do in the future. The work done by Dextre in the coming week will lay the foundation for the future when one day, robots will be sent to repair, refuel and reposition orbiting satellites. On-orbit robotic servicing could therefore save satellite operators from the significant costs of building and launching new replacement satellites, and help reduce space debris.

Boucher is an entrepreneur, writer, editor & publisher. He is the founder of SpaceQ Media Inc. and CEO and co-founder of SpaceRef Interactive LLC. Boucher has 20+ years working in various roles in the space industry and a total of 30 years as a technology entrepreneur including creating Maple Square, Canada's first internet directory and search engine.
@marckboucher
Previous Unpacking OPALS on the Space Station – Broadcasting Live HD Video
Next Canadian Satellite Design Challenge Announces University of Victoria as the Winner