A Summary of the 40th Canadian Symposium on Remote Sensing

Plenary papers saw Steve DeRoy of the Firelight Group speak to indigenous mapping on day one while Hugh MacKay, a well-known professional in the remote sensing community and now Member of the Legislative Assembly of Nova Scotia, spoke on the last day. In his interesting presentation MacKay addressed the need to link research to the user community and what Nova Scotia was doing to make that happen.

In between there was a plenary session presentation by Éric Laliberté of the Canadian Space Agency (CSA). He spoke of Canada’s space strategy and the three powerful words behind it: exploration, imagination and innovation. The CSA appears to be taking a few pages out of the old remote sensing playbook when Laliberté spoke about harnessing space to solve everyday challenges for Canadians such as security, sovereignty and connecting Canadians. Other notable comments by him saw a focus on interdepartmental cooperation, international partnerships, and the importance of developing industry. These were good and encouraging words to hear from a senior official of the Space Agency.

There were also two plenary session panels. The first addressed the history of the remote sensing and geomatics field and the second was on the future of “New Space.”

In the history session, former UNB President Dr. John McLaughlin spoke about the importance of innovation and the leadership position Canada earned in the fields of land administration and spatial data infrastructure through the work at UNB. Dr. Bob Ryerson, who has worked with some thirty of his former colleagues on a history of the Canada Centre for Remote Sensing (CCRS), spoke on the many early successes of CCRS – and the reasons for those successes. These included meaningful advisory structures, listening to users, international engagement, strong leadership and the willingness to take risks. Dr. Monique Bernier of the L’Institut national de la recherche scientifique (INRS) emphasized the importance of working with users and stakeholders to truly understand what the users know – and what they don’t know – both of which are equally important. UNB’s Dr. Ian Church closed out the session speaking on the cutting edge work done in ocean mapping.

The New Space session brought together those involved in New Space – Sam Lief of Planet Labs and Stephane Germain of GHGSat as well as those who have been involved in the “older space” (read Government space) such as Éric Laliberté. Others involved in the panel crossed over between the new and the old – Gordon Staples of MDA, Kevin Jones of PCI Geomatics, Nick DeMerchant of ESRI and Robert Cocciardi of Malvern. The main points in this discussion were clear. First, the involvement of venture capital (VC) in space has been disruptive. Second, the infectious enthusiasm of both Lief and Germain underlined their view that this disruption was a good thing. A more sobering point was made that paying customers are needed to create a sustainable market for the so-called “New Space” firms. Without paying customers the VC funds will disappear and the bright new stars may fade into obscurity. A series of questions on New Space and where it was going were posed by the moderator Des Power. These and several questions from the audience were answered by the panelists.

As usual there were many scientific papers ranging from those given by world-class scientists to ones given by bright young students at the Masters and PhD levels. There were technical sessions on an eclectic range of topics to suit every imaginable interest. There were applications sessions on wetlands, wildfires, oil spills, Arctic and northern mapping, soils, hydrology, ecosystems and environment, sea ice, freshwater, coastal and inland waters, and urban. Technology focused sessions were on methods of analysis LIDAR, UAVs, and, of course the RADARSAT Constellation Mission (RCM). Daniel De Lisle of the CSA confirmed that the RCM is a government mission and that an open data policy will be the basis for access. In the ensuring discussion a comment was made that the value of remote sensing data comes from its use – not from its sale. The audience applauded.

One could expect that the main government players such as the Canada Space Agency and the Canada Centre for Mapping and Earth Observation would be present with a booth – and they were. It was most heartening to see some of the main private sector players in remote sensing having a booth and sponsorship to support the largely research and user communities that tend to come to these symposia. Notable sponsors were Planet Labs, ESRI, PCI Geomatics, MDA, and Teledyne CARIS. Others perhaps less familiar were also present including Malvern Panalytical, Quantum Spatial, and SDF Solutions.

On the social side, the UNB team out-did themselves with some of the best food ever seen at a Canadian Symposium from the opening night icebreaker to the Awards Banquet – the highlight of every Canadian Symposium on Remote Sensing. The Larry Morley Gold Medal was presented to Dr. Monique Bernier for her outstanding contributions to research, education and the organizational development of remote sensing in Canada. Dr. Gary Borstad was given the Val Shaw Award for his career long contributions to natural resource applications. Dr. Joe Piwowar, long time Treasurer of the CRSS, was the first recipient of the Society’s Outstanding Service Award. The Best PhD Thesis Award went to Dr. Fanny Larue of l’Université de Sherbrooke, while David McCaffrey of Lethbridge won the Award for Best Master’s Thesis.

All in all the conference was well organized, provided interesting papers, and the opportunity to see old friends and make new ones.

Contributed by: Dr. Bob Ryerson, FASPRS, is the president of Kim Geomatics Corporation and former Director General of the Canada Centre for Remote Sensing.

Boucher is an entrepreneur, writer, editor & publisher. He is the founder of SpaceQ Media Inc. and CEO and co-founder of SpaceRef Interactive LLC. Boucher has 20+ years working in various roles in the space industry and a total of 30 years as a technology entrepreneur including creating Maple Square, Canada's first internet directory and search engine.
@marckboucher
Previous Natural Resources Canada Expects RCM Launch Will Kick Off More Demand for Canadian Satellite Images
Next Making Government Science Work for Canada and the World Report Released 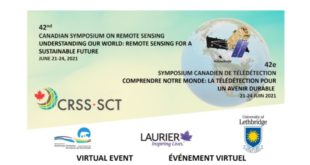 The Canadian Symposium on Remote Sensing is virtual once again