To Burp or Not to Burp: A Guide to Your Body in Space. Credit: Annick Press.
Share

A lot of people are aware of May 4th as a celebration of Star Wars fandom. “May the Fourth be with you!” But this year, May the 4th was also International Space Day. For the last 20 years, the first Friday in May has been celebrated as Space Day, where scientists and educators come together to teach kids about the majesty of space.

With that in mind, today we’ll be taking a look at some children’s books about space: including three educational books by former Canadian astronaut Dr. Dave Williams, Col. Chris Hadfield’s new storybook, and a selection of three other Canadian books that are helping spark the love of space in young explorers across Canada.

Doctor Dave and the Human Body in Space

Dr. Dave Williams is a medical doctor and University of Toronto medical lecturer. His accomplishments and drive led to his selection in 1992 as one of four astronaut candidates from a field of over five thousand. In 1998, he served as both Mission Specialist and the first non-American Crew Medical Officer for Space Shuttle Columbia’s STS-90 mission. This “Neurolab” mission was a major success that taught us a lot about a host of brain- and neural-related issues.

“Dr. Dave” went back into space in 2007 for the STS-118 mission, where he took part in three of the mission’s four spacewalks—the highest number of spacewalks performed in a single mission. He was out in the void for almost 18 hours, a Canadian record, as he and his colleagues added new components to the International Space Station. He still teaches and speaks about these subjects today, as you can hear in last month’s SpaceQ podcast.

For the last three years, Dr Williams has also been working to teach kids about life in space. When contacted by SpaceQ, he said that he’s working to take the conversation about encouraging “STEM” and anchor it in the real world; that he wanted to “capture the imagination of kids in space exploration and to fuel their curiosity about what it is like to live and work in space.” He was especially inspired by a conversation with one budding scientist who wanted to know “whether gravity was required for food to go to the stomach.”

[amazon_link asins=’1554518539′ template=’ProductAd’ store=’spacan00-20′ marketplace=’CA’ link_id=’f6e8b585-5a1c-11e8-bd9b-099d7d55fa39′]His first book, 2016’s To Burp or Not to Burp: A Guide to Your Body in Space, was his answer to that boy’s question, and was nominated for a brace of children’s book awards. The book leverages Dr. Dave’s expertise as a doctor, scientist and astronaut to address everything you might wonder about bodies in space:

“Dr. Dave” does a particularly thorough job with exploring and explaining that latter question: the book goes over everything from the color-coded individualized receptacles to the sealed metal cans that are eventually ejected into reentry (and disintegration) with the rest of the mission’s waste. But beyond that, it shows how your body will change in space, how you have to wear special exercise shirts and, yes, why you should be very careful burping. Even adults will probably learn a thing or two!

The book features a simple, easy-to-follow layout of photos, text boxes, and clever, funny cartoons by Theo Krynauw. It was co-authored by Loredana Cunti.

[amazon_link asins=’1554519152′ template=’ProductAd’ store=’spacan00-20′ marketplace=’CA’ link_id=’541f9f23-5a1d-11e8-b257-83dbd2192f1a’]His second book, Go For Liftoff!: How to Train like an Astronaut focuses on showing kids 9-12 exactly what’s needed to go into space, and how it’s not as straightforward as you might think! He goes over some of the people who go up into space: medical doctors and researchers (like himself), geologists, technologists, and pilots, and how all those different people need to get along. He delves into the rigours of astronaut training, the simulators, the tests, and how astronauts must learn that “there’s no ‘I’ in team”.

As in To Burp or Not To Burp, the book features a mix of photos, clear text, and Theo Krynauw’s clever cartoons, and was also co-authored by Loredana Cunti.

[amazon_link asins=’1773210130′ template=’ProductAd’ store=’spacan00-20′ marketplace=’CA’ link_id=’82040450-5a1e-11e8-b594-cf34b6a2be6a’] Dr. Williams’ (and Ms. Cunti’s) most recent book, Mighty Mission Machines: From Rockets to Rovers, teaches kids 9-12 about the amazing technology that allows us to travel in space, explore space, and even traverse other worlds. The book shows scientists working on space-focused tech, and astronauts in space. It also features photos and diagrams of earth-based technology like launch towers; spaceborne vehicles like the Russian Soyuz rocket or the American Space Shuttle; and extra-terrestrial rovers and vehicles like the classic “moon buggy” Apollo 17 and the famous Mars Rovers Curiosity and Opportunity. It even talks about special space wrenches, and the ISS’s onboard “Robonaut”.

Like the other two books, it features a mixture of Krynauw cartoons, space photos, and informative text on the immense technical feats involved in space travel and exploration.

Williams and Cunti are currently working on the next installment of this series.

Colonel Hadfield and the Darkness of Space

Few Canadians these days are unaware of the exploits of Colonel Chris Hadfield. Thanks to a combination of clever tweets, compelling chats with earthside audiences of all ages, informative videos, and one surprisingly catchy performance of David Bowie’s Space Oddity from aboard the International Space Station, the first Canadian Commander of the ISS and his iconic moustache have become internationally famous.

He’s also become a successful author. His adult-focused books You are Here: Around the World in 92 Minutes and An Astronaut’s Guide to Life on Earth are both #1 bestsellers. But it’s his newest book, The Darkest Dark, that may well be the most poignant, and it’s another great Canadian kid’s book about space.

[amazon_link asins=’1101918624′ template=’ProductAd’ store=’spacan00-20′ marketplace=’CA’ link_id=’972d1ae4-5a27-11e8-b254-d7699f9dbcd3′]Featuring stunning art by the Pen Brothers, and co-authored by Kate Fillion, The Darkest Dark is about young “Chris” (Hadfield himself) and his struggles as a kid who is both fascinated with space yet terrified the dark. The boy is scared stiff of the prospect of aliens hiding under his bed, and even a night light can’t console him—until watching the 1969 moon landing prompts young Chris to understand that even in the dark, “your dreams are always with you.” He steels his courage and recommits himself to his goal of going to space, which he recognizes as “the darkest dark ever.”

It’s a warm, endearing story, with compelling dreamlike art: perfect to read to young children and for slightly older kids to read to themselves. Its message of courage in the face of fear is timeless, and its willingness to recentre space as a home for childhood ambitions for the future will be welcome to SpaceQ readers young and old. Even if you never go to space, you’ll remember that fears and ambitions can sometimes be intimately connected.

A Few Other Books on Space from Canadians

Finally, here are a few other complimentary books by Canadians about space.

If you’re looking for a brief introduction to commercial space, you might want to check out Space Tourism, by Peter McMahon for ages 9-12. It introduces kids to rocketry using simple experiments, then puts them into the context of private space travel, instead of the governmental framework. It shows different private space vehicles, including both rocket-based vehicles and near-orbital Space Planes, and both the present and future of space tourism. It also talks about how “space tourists” will occasionally visit the International Space Station…and even pitch in!

Journey to Mars: Quest for the Red Planet, By Jonathan Webb for Ages 8-13, looks at the “extreme physical danger” involved in getting humans to Mars. Webb looks the fascination with Mars throughout history, our unmanned missions to Mars, and what Mars is really like. He tells readers about people’s ideas for how to visit Mars, what you’d need to be a Martian explorer, nd what life would be like for people who make it to Mars. For anybody who’s got kids who are interested in the Red Planet, this might be a good choice.

And finally, something slight different: Ashley Spires’ Graphic Novel Binky the Space Cat, for ages 7-10. It’s about an imaginative cat named Binky who has never ventured outside his family home, which he thinks of as his “space station”. The cat has a mission: to blast off to the “outer space” of the backyard and battle the “alien” bugs with his co-pilot, a stuffed mouse named Ted. Binky the Space Cat is the first book in the Binky series, and will inspire imaginative kids to see themselves as astronauts, just like young Chris Hadfield.

Craig started writing for SpaceQ in 2017 as their space culture reporter, shifting to Canadian business and startup reporting in 2019. He is a member of the Canadian Association of Journalists, and has a Master's Degree in International Security from the Norman Paterson School of International Affairs. He lives in Toronto.
Previous The First Humans to Mars Mission in 2033 is Achievable
Next Canada’s Civil Space Sector in a Tough Spot but Commercial Sector Sees Opportunity 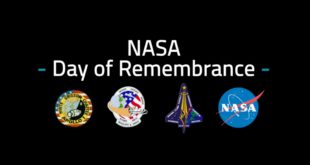 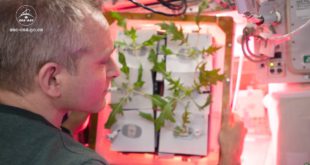 Chris Hadfield and Iain Christie on NASA’s Day Of Remembrance