In the last 17 years the Canadian Space Agency (CSA) has left $802 million in planned spending unspent. In the last three years the CSA has underspent its budget by $201 million. In 2010 the Conservative government began the process of decreasing the CSA’s base budget from $300 million to $260 million. The Liberal government has not restored the CSA’s annual base budget funding cut. Add these points together and it’s no wonder the space community is concerned.

This is the first story in our 2018 Budget Series where we’ll take a deeper look into Canada’s space program.

One thing you should be aware of, context is important, and our series will put the alarming data we’ve mentioned into context.

For instance, of that $802 million that’s has gone unspent in the last 17 years, some of those funds have been re-profiled. An example would be the RADARSAT Constellation Mission (RCM) which has seen funding moved forward into another years budget based on the progress of the program. However, not all unspent funds can be attributed to moving money from one year to another for a specific program. It’s clear the CSA, like other government departments, habitually underspends its budget.

It should also be noted that the CSA can’t always be faulted for major programs having their funding shifting to future years, as these programs have schedules that move around, sometimes for political reasons.

Knowing what the CSA has actually spent when discussing the agencies budget, including when comparing it to other nations, is important, and an important point we’ll emphasize during this special series.

The following table and chart gives you snapshot of the last three years of planned versus actual spending along with the planned spending for 2017-18 and 2018-19. Taken without any context, it doesn’t paint a pretty picture. Taken with context, the overall picture isn’t as bad as it may seem.

For instance, of the $201 million not spent in the last three years, $180.6 were funds allocated to be spent on the RADARSAT Constellation Mission. The CSA characterizes those non-expenditures as “variations in payment schedules in the implementation cycle for RCM.” These funds are being punted to future budgets to pay for RCM as the program progresses.

For a specific example of RCM funding re-profiling, let’s look at 2016-17. In that fiscal year the CSA had planned on spending $179.4 million on RCM. It spent $134.9 million instead, with a $44.5 million variance that was pushed into the following years budget. 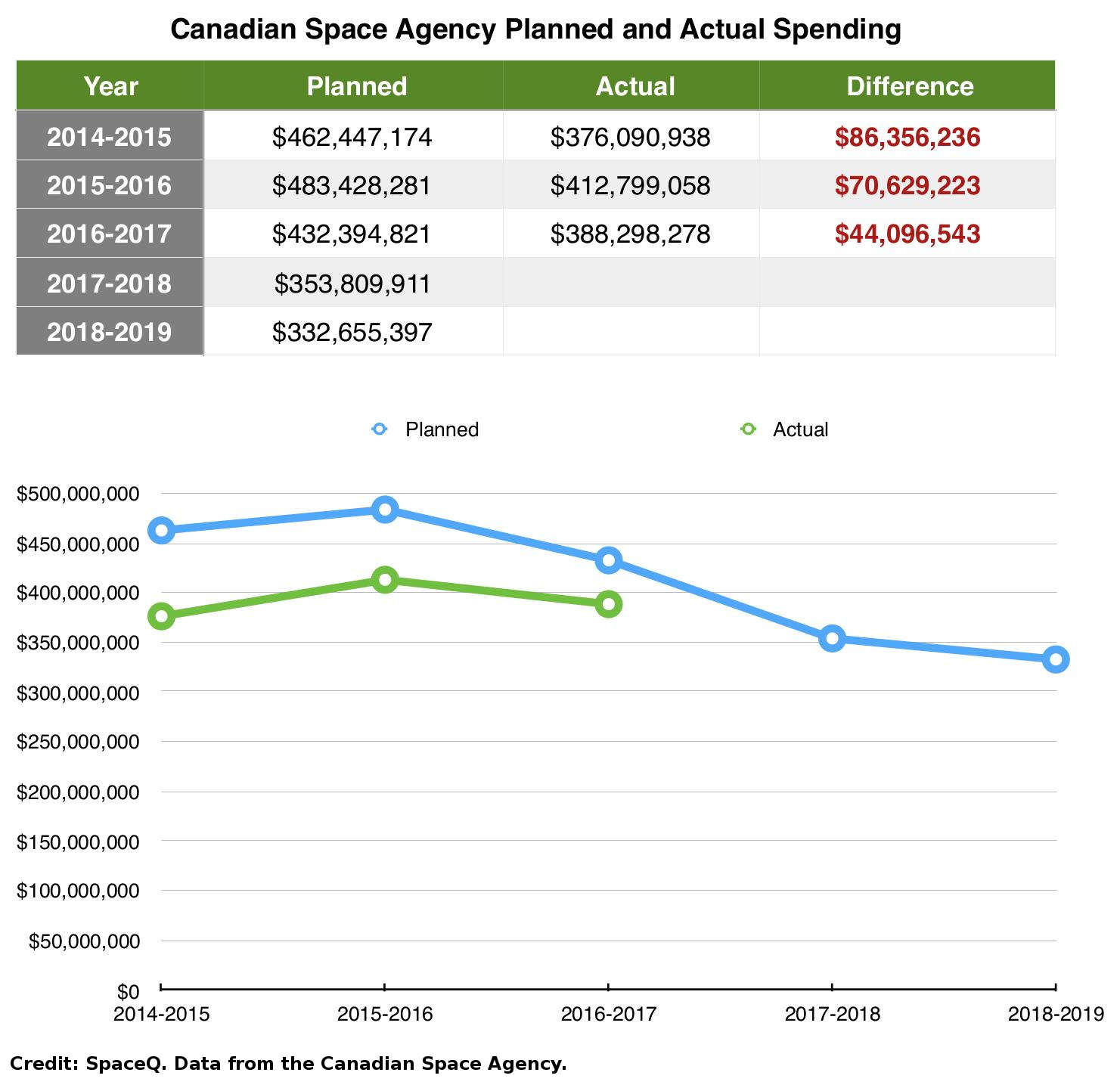 For 2017-18 the planned spending was $353.1 million, but that did not include a portion of the $80.9 million of new funding which was announced in last years budget. That funding, for three new initiatives, will be spread out over five years and is earmarked for the Quantum Encryption and Science Satellite (QEYSSat) mission, a radar instrument for a future Mars orbiter and the Canadian CubeSat Project.

The bulk of the funds for two of these projects, QEYSSat and the Mars radar, likely won’t be spent until the 2019-20 budget and beyond. QEYSSat recently received another portion of its funding, $1.85 million in December. The Mars radar instrument is supposed to be a sub-surface ice sounder on NASA’s future Next Mars Orbiter, or sometimes referred to as the Mars 2022 Orbiter. However, with budget uncertainties in the U.S., no new NASA administrator, and no final approval for the mission, the funds earmarked for that program are basically on hold. Importantly, an update last fall to NASA’s Mars Exploration Program Analysis Group (MEPAG) indicated that NASA had concluded a new orbiter is not needed at this time, meaning the Mars 2022 orbiter is on indefinite hold.

The Canadian CubeSat Project is listed at costing $8 million.

The planned spending for 2018-19 could possibly see an increase. That information will be released in mid-to-late March in the CSA’s 2018-19 Departmental Plan, and will be covered in another article in this series. Note, that the CSA’s planned spending is unlikely to include any new major programs in it. That would be announced later and be on top of the planned budget.

Budget Numbers of the Last 20 Years

As the table below shows the last time the CSA spent more than its allocated budget was the 1999-2000 fiscal year. That year the CSA planned to spend $304 million but in fact spent $334 million.

As we’ve explained, the difference in planned versus actual spending is often due to a major project having funding pushed into forward years. In future articles in this series we’ll go deeper into the numbers. 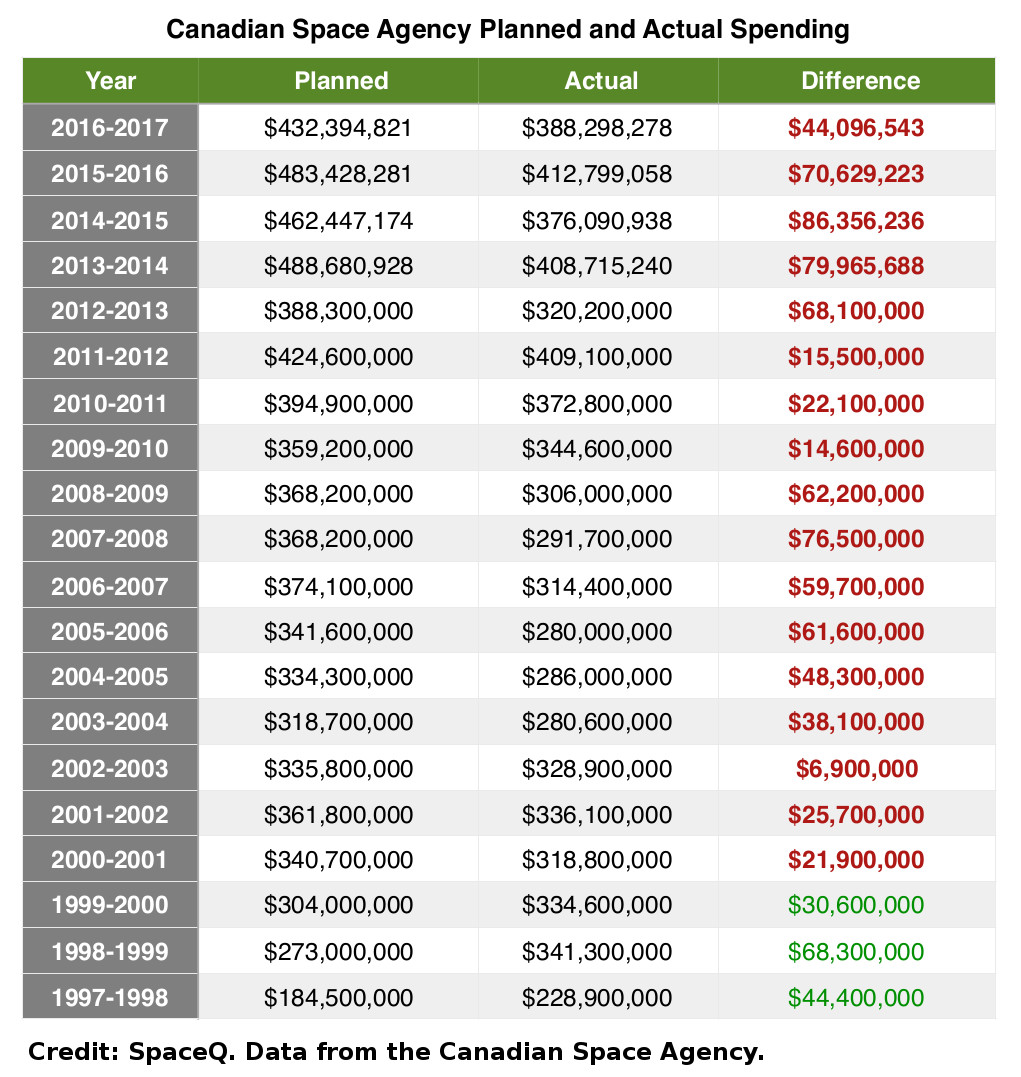 The chart below graphs what the CSA actually spent by fiscal year.

Since 2010, six of the past seven years have seen the budget surpass the $350 million mark in spending. However, those increases can primarily be attributed to the additional funding of one major program, RCM. If you then factor inflation and subtract RCM funding, which we’ll detail in another article, then CSA funding is flat to falling since the RCM program was started.

An example of how the picture can look when you calculate inflation into the equation is this; The CSA spent $341 million in 1998-99. In 2016-17 they spent $388 million. However, if the CSA had kept a stable spending profile, only adjusted for inflation, their spending in 2016-17 would have to have been $480 million to be equivalent to the dollars spent in 1998-99.

In comparison to other other developed or developing programs, this would appear to put Canada at a disadvantage as most of those programs are seeing budget increases as we’ll explore later in the series.

Boucher is an entrepreneur, writer, editor & publisher. He is the founder of SpaceQ Media Inc. and CEO and co-founder of SpaceRef Interactive Inc. Boucher has 20 years working in various roles in the space industry and a total of 27 years as a technology entrepreneur including creating Maple Square, Canada's first internet directory and search engine.
@marckboucher
Previous Canadian Life Detection System Could be Used on Future Missions to Mars, Europa or Enceladus
Next Will Canada Develop Its Own Orbital Rocket? 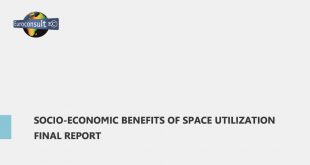 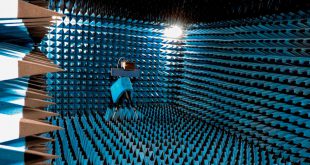