The world's most sensitive astronomical camera. credit: University of Montreal.

A team of Universite de Montreal researchers, led by physics PhD student Olivier Daigle, has developed the world’s most sensitive astronomical camera. Marketed by Photon etc., a young Quebec firm, the camera will be used by the Mont-Megantic Observatory and NASA, which purchased the first unit.

The camera is made up of a CCD controller for counting photons; a digital imagery device that amplifies photons observed by astronomical cameras or by other instruments used in situations of very low luminosity. The controller produces 25 gigabytes of data per second.

Electric signals used to pilot the imagery chip are 500 times more precise than those of a conventional controller. This increased precision helps reduce noise that interferes with the weak signals coming from astronomical objects in the night sky. The controller allows to substantially increase the sensitivity of detectors, which can be compared to the mirror of the Mont-Megantic telescope doubling its diameter.

“The first astronomical results are astounding and highlight the increased sensitivity acquired by the new controller,” says Daigle. “The clarity of the images brings us so much closer to the stars that we are attempting to understand.”

A thriving Quebec company Photon etc. developed a commercial version of the controller devised by Daigle and his team and integrated it in complete cameras. NASA was first to place an order for one of these cameras and was soon followed by a research group from the University of Sao Paulo, and by a European-Canadian consortium equipping a telescope in Chili. In addition, researchers in nuclear medicine, bioluminescence, Raman imaging and other fields requiring rapid imagery have expressed interest in purchasing the cameras.

Photon etc. is a Quebec research and development company that specializes in the manufacting of photonic measurement and analysis instruments. The company is growing rapidly after spending four years in the Universite de Montreal and its affiliated Ecole Polytechnique IT business incubator.

“The sensitivity of the cameras developed by the Centre de recherche en astrophysique du Quebec (CRAQ) and Photon etc. will not only help us better understand the depths of the universe but also better perceive weak optical signals coming from the human body. These signals can reveal the early signs of several diseases such as macular degeneration and certain types of cancer. An early diagnostic leads to early intervention, hopefully before the disease becomes more serious thus saving lives and important costs,” says Sebastien Blais-Ouellette, president of Photon etc.
Scientific results for the camera were recently featured in the Publications of the Astronomical Society of the Pacific, a prestigious instrumentation journal.

Partners in research:
This research was made possible thanks to the financial support of the Natural Sciences And Engineering Research Council of Canada, Photon etc., the Canada Foundation for Innovation, the Fonds quebecois de la recherche sur la nature et les technologies.

On the Web:
About the CRAQ: http://craq-astro.ca
About the Universite de Montreal’s Department of Physics: http://www.phys.umontreal.ca/index-en.php

Is trained as a biologist (M.A. and B.A. degrees) and has a multidisciplinary background with experience and expertise that ranges from spacecraft payload integration and biomedical peer review to freelance writing and website authoring. He is the founder of NASA Watch and co-founder of the Astrobiology Web and SpaceRef.
@keithcowing
Previous Guy Lalibert Is On His Way
Next SpaceRef.ca on CBC Radio 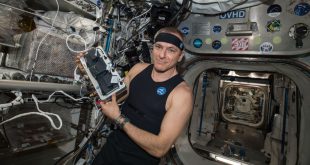