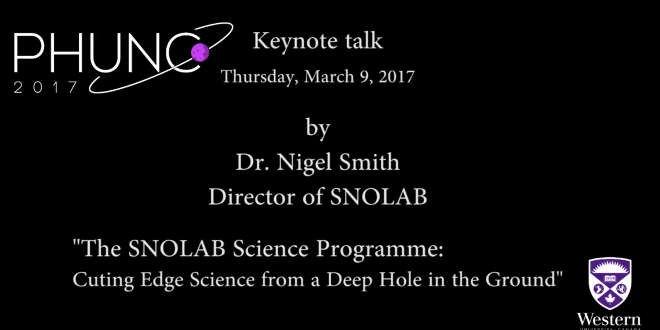 Western University recently held its Physics Undergraduate Conference (PhUnC) which included the keynote talk by Dr. Nigel Smith, Director of SNOLAB. The conference brings together students from Western University with other universities in Southwestern Ontario and some nearby U.S. universities. Undergraduate are provided an opportunity to present their work on a summer research project, honors thesis, or any physics topic of interest, including interdisciplinary physics research. More video from the conference is available at the Western University Physics and Astronomy YouTube account.

SNOLAB is a world-class science facility located deep underground in the operational Vale Creighton nickel mine, near Sudbury, Ontario in Canada. The combination of great depth and cleanliness that SNOLAB affords allows extremely rare interactions and weak processes to be studied. The science programme at SNOLAB is currently focussed on sub-atomic physics, largely neutrino and dark matter physics. SNOLAB seeks to enable, spearhead, catalyze and promote underground science, whilst inspiring both the public and future professionals in the field.

At 2km, SNOLAB is the deepest clean room facility in the world. It is an expansion of the existing facilities constructed for the Sudbury Neutrino Observatory (SNO) solar neutrino experiment. SNOLAB has 5,000 m2 of clean space underground for experiments and supporting infrastructure. On surface there is a 3,100 m2 SNOLAB building to support the underground experiments.

Nigel Smith joined SNOLAB as Director during July 2009. He currently holds a full Professorship at Laurentian University, adjunct Professor status at Queen’s University, and a visiting Professorial chair at Imperial College, London. He received his Bachelor of Science in physics from Leeds University in the U.K. in 1985 and his Ph. D. in astrophysics from Leeds in 1991. He has served as a lecturer at Leeds University, a research associate at Imperial College London, group leader (dark matter) and deputy division head at the STFC Rutherford Appleton Laboratory, before relocating to Canada to oversee the SNOLAB deep underground facility.

Dr. Smith has studied astroparticle physics in extreme locations throughout his career, studying astronomical sources of ultra high energy gamma rays using a telescope at the South Pole, searching for Galactic dark matter using detectors located 1100m underground at the Boulby facility in the U.K., and subsequently overseeing dark matter and neutrinos studies 2km underground at the SNOLAB facility in Canada. In 1987 he “wintered-over” as the sole operator of the telescope at the Amundsen-Scott South Pole station, being the first Briton to successfully winter at the Pole itself.

As Director, Dr. Smith has full operational responsibility for the SNOLAB underground facility hosted at the Vale Creighton mine, supporting a fully international science programme. He has responsibility for deriving facility funding, overseeing management and operations, and development of the science programme itself. He supports the scientific community by serving on several (currently 9) peer review, agency science strategy and institute board and oversight committees.

Boucher is an entrepreneur, writer, editor & publisher. He is the founder of SpaceQ Media Inc. and CEO and co-founder of SpaceRef Interactive LLC. Boucher has 20+ years working in various roles in the space industry and a total of 30 years as a technology entrepreneur including creating Maple Square, Canada's first internet directory and search engine.
@marckboucher
Previous Exclusive: Maritime Launch Services Selects Nova Scotia Site for Spaceport Over 13 Other Locations
Next MDA’s U.S. Subsidiary SSL RESTORE-L Mission Hits Presidential Roadblock