The following article is a free sample from the current issue of Space Quarterly Magazine. It is our hope that if you enjoy this article you will consider subscribing to the magazine.
—
By Eric Choi: On January 9, 2013, the Federal Government announced it will proceed with the implementation phase of the RADARSAT Constellation Mission (RCM). Initially conceived almost a decade ago, the long-awaited announcement meant that the Canadian Space Agency (CSA) and its partners in government and industry can finally complete one of the most important Canadian space projects of this decade.

Scheduled for launch later this decade, the RADARSAT Constellation Mission will serve the operational needs of Canadian Government departments in the areas of maritime surveillance, disaster management and ecosystem monitoring. It will consist of three satellites spaced equally apart in a single orbital plane at a mean altitude of 600 km. By distributing capabilities across several smaller satellites, the system will be more robust and flexible with improved coverage and target revisit capabilities. Combined with the inherent ability of SAR to produce images day or night through clouds or haze, the utility of RCM to support both civilian and military applications is obvious, particularly with respect to oceans and the North.
“The North is changing extremely quickly,” says Lee Carson, president of Norstrat Consulting. “This represents a huge economic opportunity for Canada, but also an equally great challenge in terms of security and sovereignty. We can’t meet these challenges without continuously monitoring the region, and the only way for the Department of National Defence to cost-effectively monitor such a vast and remote area, which is dark for up to six months at a time, is from space using a radar-based system like RCM.”
Polar Epsilon is the Department of National Defence project for the utilization of RADARSAT-2 to support DND and Canadian Forces operational stakeholders. The follow-on project to utilize RCM is called, appropriately enough, Polar Epsilon 2. Many defence and security applications such as Northern and maritime surveillance require data in near real-time, on the order of fifteen minutes or less. As with RADARSAT-2, the RCM data will be downlinked through the Polar Epsilon ground stations at Masstown, Nova Scotia and Aldergrove, British Columbia. Data is processed at Aldergrove and automatically ingested into the Recognized Maritime Picture (RMP), an integrated plot of activities in Canadian waters that is used not only by the Canadian Forces, but also the Canadian Coast Guard and the Department of Fisheries and Oceans.
One of the RCM mission requirements is persistent wide-area maritime surveillance up to 2,200 km off the coasts of Canada, picking up ships 25 m or larger twice daily with a probability of detection greater than 80% and a false alarm rate of less than 10-8 in wave heights of up to four metres. To meet this requirement, RCM will be equipped with a ship detection mode that features a number of beams, resolutions and looks that are specifically designed to optimize vessel detection. The fundamental engineering challenge of detecting vessels with SAR is the ability to resolve the ship signal against sea surface clutter and other background noise. While RCM will be equipped with sophisticated on-board filtering and signal processing, the actual ship detection will be carried out through the processing of the SAR images on the ground.
Complementing the SAR payload will be a receiver to pick up Automatic Identification System (AIS) messages. AIS transponders are mandated by the International Maritime Organization (IMO) for ships of 300 tons or greater and all passenger vessels regardless of size. The fusion of AIS and SAR data will enable non-compliant or non-cooperative ships to be more quickly identified as targets of interest to be investigated by other Canadian Forces assets such as maritime patrol aircraft. 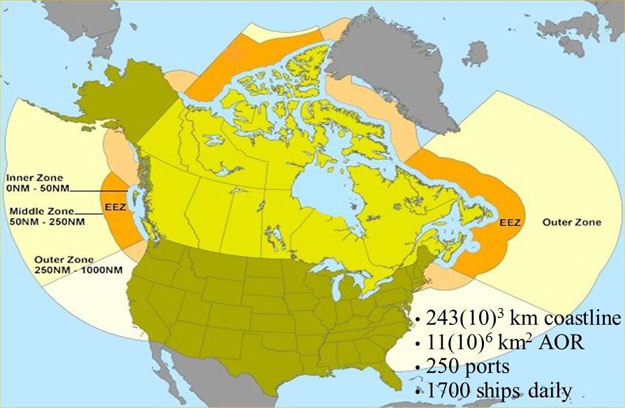 Canadian surveillance regions, exclusive economic zone (EEZ) and area of responsibility (AOR). 2010 NATO MARITIME RAPID ENVIRONMENTAL ASSESSMENT CONFERENCE.
One of the most interesting applications of SAR is coherent change detection (CCD), which is a technique that relies on comparing the phase information between two or more radar images to detect subtle changes in a given area over time. Using CCD, it is possible to measure millimetre-level deformations on the ground, enabling several new applications. For example, CCD could detect the tracks of a vehicle that has travelled over a hard-packed dry surface sometime between two SAR image acquisitions.
The following trio of images show the results of a CCD evaluation trial conducted by Defence Research and Development Canada (DRDC) Ottawa using RADARSAT-1 imagery of a test site near Kandahar, Afghanistan. The upper panel shows the first “master” RADARSAT-1 image, and the middle panel shows the second “slave” image acquired one 24-day orbit repeat cycle later. The combined “coherence” image is shown in the lower panel, in which the dark areas indicate low SAR phase coherence and therefore areas of change. In the combined image, the broad regions of low coherence correspond to vegetation, drifting sand or areas of radar shadow. Linear features in the coherence image are of interest because these often correspond to roads or paths that could have been used for travel between the times of the two image acquisitions. 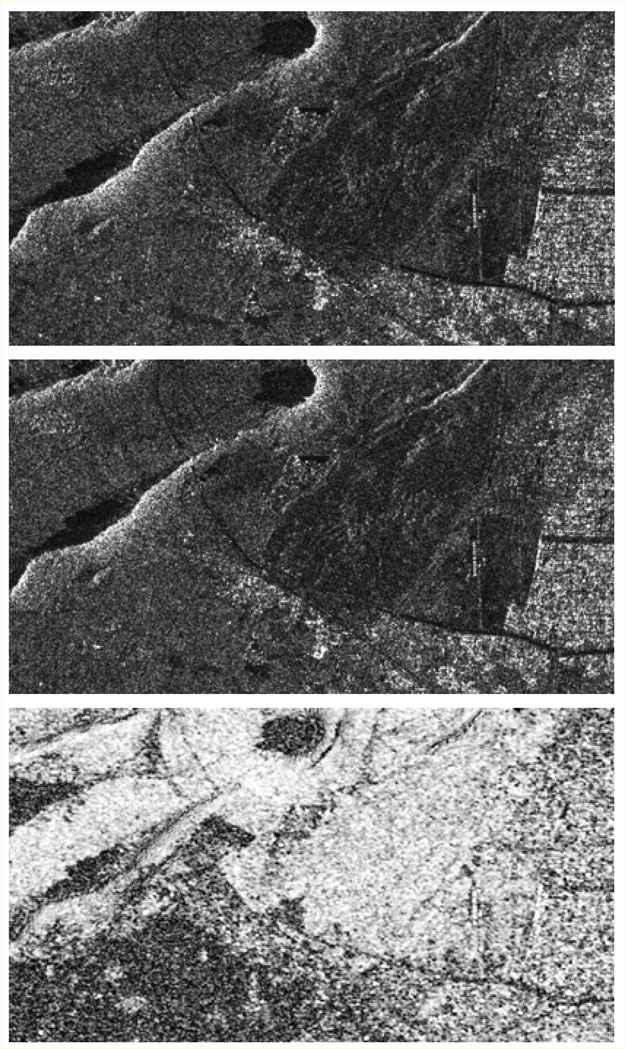 Example of coherent change detection using RADARSAT-1 imagery of Kandahar, Afghanistan. 10th IEEE International Conference on Information Fusion.
For coherent change detection, RCM will be a significant improvement over RADARSAT-2, explains Ralph Girard, CSA manager for radars and antennas. “The three RCM satellites will be spaced equally in the orbit plane such that each satellite can image the same area on the ground, with exactly same geometry, every four days. RADARSAT-2 can do the same thing but the repeat pass is only every 24 days, which is too long for many coherent change detection applications.”
Coherent change detection imposes significant requirements for orbit and attitude control of the RCM satellites. They will have to fly in a common orbital “tube” of no more than 100 m in radius, and stringent attitude control in pitch and yaw will be needed. This will require the RCM satellites to perform frequent orbit maintenance thruster burns, up to one per day during times of high solar activity. Constraints are also imposed on the antenna pointing error and spacecraft bus pointing knowledge. The star tracker on each RCM satellite will be mounted directly to the antenna support structure, and this structure will be decoupled from the spacecraft bus in order to reduce deformations due to differential thermal expansion.
Moving target indication (MTI) is another application enabled by SAR. RADARSAT-2 executes MTI through a mode called Moving Object Detection Experiment (MODEX), which is capable of picking up a mid-sized car travelling with a 40 km/h radial velocity in a rural area with 90% probability. MTI was not originally planned for RCM, in part because its smaller SAR antennas were thought to preclude a useful capability. For this reason, an RF switch that would be required for MTI is not currently baselined for the RCM SAR payload. However, researchers at DRDC Ottawa recently proposed achieving limited MTI functionality on RCM by using the programming flexibility of the satellites to change the receiver antenna configuration between radar pulses.
Adding an MTI capability to RCM would augment the existing ship detection mode and enable the detection of vessels smaller than 25 m in waves up to four metres in height, the detection of 25 m or larger ships in waves higher than four metres, an overall higher detection probability at the same false alarm rate, and improved discrimination between ice and vessels in Arctic waters. It would also expand originally specified capabilities such as estimating vessel speeds and probable headings as well as improving the ability to distinguish between ships and ambiguities at the littoral interface between land and sea. There could also be land applications such as motion pattern analysis to identify routes for initial deployment planning, for example before entering a potential conflict theatre or after a natural disaster like an earthquake.
“While RCM is the ultimate responsibility of the Canadian Space Agency, the potential capabilities it offers fall very clearly within the context of the Canada First Defence Strategy,” says DND spokesperson Daniel Blouin. “While the Canadian Forces rely on many resources to provide surveillance of Canada’s maritime approaches, satellite systems provide access to the ultimate high ground, allowing a unique perspective that cannot be matched.”
—-
The following article is a free sample from the current issue of Space Quarterly Magazine. It is our hope that if you enjoy this article you will consider subscribing to the magazine. 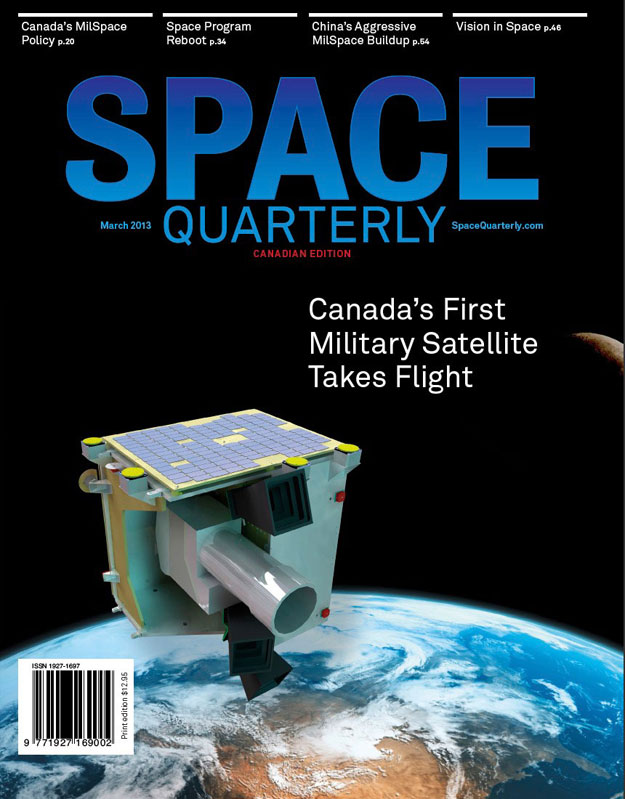 Boucher is an entrepreneur, writer, editor & publisher. He is the founder of SpaceQ Media Inc. and CEO and co-founder of SpaceRef Interactive LLC. Boucher has 20+ years working in various roles in the space industry and a total of 30 years as a technology entrepreneur including creating Maple Square, Canada's first internet directory and search engine.
@marckboucher
Previous March 2013 Issue of Space Quarterly Magazine Released
Next Budget 2013 – Space Sector: Please Hold a Little Longer