According to the Canadian Space Technology Advancement Group the Canadian International Rover Challenge is an annual competition open to post-secondary student design teams globally. “Teams are challenged to construct a rover that completes a series of tasks in a simulated early colony on an extraterrestrial planet. These challenges include traversing varying terrain, autonomous operations, operating a dexterous arm, and more.”

The Canadian Space Technology Advancement Group not-for-profit was created in 2017 by University of Saskatchewan Space Design Team to manage the competition and to encourage global participation. Remarkably, the competition has grown from three teams in its first year to twenty teams this year, of which half are from Canada.

The event will be held between August 9 -12 at the Badlands Community Facility and the Badlands area around Drumheller, Alberta.

According to organizer William Davis the teams “rovers have been designed to complete a series of tasks intended to simulate challenges that a rover could face on Mars. The challenges include surface sampling, search and rescue at night, terrain traversal, crash site analysis and equipment servicing. All tasks are completed either autonomously or through teleoperation.”

Rover technology is yet another technology area where Canadian students and several commercial entities see opportunities forthcoming. Those opportunities are part of Canada’s new space strategy which includes human and robotic exploration of the moon in the near term.

The Title Sponsor according to Davis is Protocase who design custom enclosure cases. Steve Lilley from Protocase said in supporting “an initiative such as the Canadian International Rover Challenge, we are doing our small part to help inspire young minds and develop future innovators. We can’t wait to see university teams put their rovers to work in Drumheller for CIRC.”

Boucher is an entrepreneur, writer, editor & publisher. He is the founder of SpaceQ Media Inc. and CEO and co-founder of SpaceRef Interactive LLC. Boucher has 20+ years working in various roles in the space industry and a total of 30 years as a technology entrepreneur including creating Maple Square, Canada's first internet directory and search engine.
@marckboucher
Previous Kepler Communications Demonstrates Kymeta’s Antenna for LEO Tracking and Data Transfers
Next The Canadian Space Agency Announces the FAST 2019 Opportunity 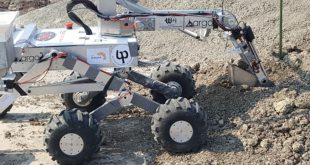