April 20, 2012 – Toronto, Ontario – Space Quarterly magazine, a publication of the SpaceRef International Group, has been chosen as the magazine for the Canadian Space Society as a benefit to its members.

Space Quarterly magazine covers the space sector with a focus on commercial, civil and military space and is published quarterly.
SpaceRef will provide the Canadian interactive digital edition of the magazine to Canadian Space Society members starting with the current March 2012 issue. Members will receive the current issue shortly and subsequent issues on June 1, September 1, December 1 and March 1. Members also have the option to purchase the print edition at a discounted rate.
“The Canadian Space Society is a growing organization that strives to take the lead in space advocacy in Canada,” said Marc Boucher, CEO of SpaceRef. “I’m excited at the opportunity to provide Society members with our magazine and to further engage them by having them interact and share their thoughts and ideas on our web sites, in particular, the SpaceRef Forum where we make the magazine articles available to members.”
The main themes of the current issue are space defence and education. Each issue also provides analysis of foreign space programs and projects.
“The Canadian Space Society is proud to be able to offer Space Quarterly to its members”, said Kevin Shortt, President of the Society. “As a leading networking hub for Canada’s space industry, it’s our priority to provide critical information about space activities and Space Quarterly will play a significant role in that service.”
About Space Quarterly Magazine
Space Quarterly magazine was first published on September 1, 2011. Two editions – Canadian and International – available in print or as an interactive PDF download. The magazine covers the space sector with a focus on commercial, civil and military space and is published quarterly. Since its debut, Space Quarterly has been warmly received and is distributed widely to enthusiasts, industry, government and academia including institutional subscribers. Print subscriptions start at $39.00 a year while a digital subscription is $19.00 a year. To subscribe and for advertising opportunities please visit http://spacequarterly.com.
About the Canadian Space Society
The Canadian Space Society is a national, non-profit organization that started over 25 years ago to bring together Canada’s best and brightest in the space industry to pursue research ideas and projects and to move the industry forward in various underdeveloped yet cutting edge fields. Its principal objective is to stimulate the Canadian space industry through its technical and outreach projects and promote the involvement of Canadians in the development of space. Over the years, the CSS has spawned many projects and several companies have originated from within the ranks of the CSS. Today, the CSS is composed of both space professionals and space enthusiasts, from both government and private industry, who are working on many of Canada’s high profile space missions.
Web site: http://www.css.ca
About the SpaceRef International Group
SpaceRef is an international, privately owned media company and is comprised of SpaceRef Interactive Inc. based out of Reston, Virginia and SpaceRef Canada Interactive Inc. based out of Toronto, Ontario. SpaceRef’s focus is on the global space systems sector. SpaceRef covers civil, commercial and military space as well space policy, space technology, astronomy and other space related topics. Founded in 1999, SpaceRef started with a small team of reporters who disseminated the news through three web sites, SpaceRef, NASA Watch and the Astrobiology Web. Today the SpaceRef network consists of over a dozen web sites with an aggregate audience of over 375,000 unique monthly readers.
Contact:
Marc Boucher, SpaceRef
marc.boucher@spaceref.com
+1 (416) 619-9203

Boucher is an entrepreneur, writer, editor & publisher. He is the founder of SpaceQ Media Inc. and CEO and co-founder of SpaceRef Interactive LLC. Boucher has 20+ years working in various roles in the space industry and a total of 30 years as a technology entrepreneur including creating Maple Square, Canada's first internet directory and search engine.
@marckboucher
Previous Canada's RADARSAT-1 to Fill in as ESA's Envisat Service Interrupted
Next Canada Looks South for Increased Export Market at the National Space Symposium 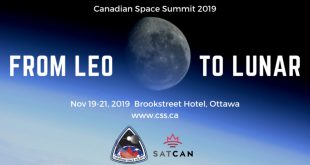 With the Theme LEO to Lunar, the 2019 Canadian Space Summit Hints at Immediate and Future Opportunities 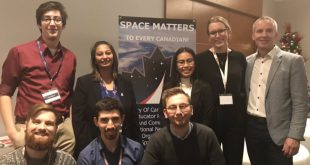