The last day of the Canadian SmallSat Symposium saw something unusual happen. Typically at conferences the last couple of sessions are poorly attended as many attendees are already headed home. That was the case for the SmallSat Symposium except for a core group of rocket professionals and enthusiasts.

Diane Kotelko, Space Systems Lead of Winnipeg based Magellan Aerospace presented Dust Off Your CubeSat Hardware and Take it Off the Shelf!

The abstract below outlines what the talk would be about. However, to put it simply, Magellan is proposing modifying their Black Brant sounding rocket to carry CubeSats for suborbital flights and that is an important development. What’s also intriguing about this proposal is that the Black Brant could eventually be launched within Canada at a future launch site, possibly the Maritime Launch Services facility in Nova Scotia, if the that project moves forward.

Abstract: Dust Off Your CubeSat Hardware and Take it Off the Shelf!

With few actual launches of CubeSats from Canadian Universities (notable exceptions being the University of Toronto and the University of Alberta), most CubeSat designs and their related demonstration missions go untested. The primary causes include (i) the limited launch opportunities, (ii) the stringent environmental testing requirements, (iii) launch lead times and delays, and (iv) high costs associated with international launches.

Despite the lack of launches, there has been an increase interest in CubeSat programs thanks to the Canadian Satellite Design Challenge and, more recently, the Canadian Space Agency CubeSat Project. These educational initiatives help train highly qualified personnel, but fall short of exposing students to the full lifecycle of space programs culminating in a launch to test and operate their spacecraft. While more launches and funds would mitigate this problem, this is also an opportunity to evaluate more accessible and sustainable alternatives by using existing Canadian suborbital rocket technology. Retaining the same educational objectives, many CubeSat missions could be tested in the context of a suborbital mission of less than 5-20 minutes of exo-atmospheric flight time using Magellan’s Black Brant vehicle.


The proposal combines an existing Canadian technology with over 50 years of space heritage with a modern CubeSat deployer to produce a highly reliably educational and research platform. Even though the last Canadian launch of a Magellan Black Brant suborbital rocket may have been 20 years ago, this reliable technology has been in constant use around the globe and continues to be an active product. This paper discusses the potential, modifications required, and capabilities for a more accessible CubeSat launch using Magellan’s Black Brant suborbital platform.

The last session of the conference was a student rocketry panel. If you missed our podcast on rocketry and indigenous launch capability, it’s well worth listening to.

Student rocketry is on the rise in Canada with university teams winning more than their share of competitions in the U.S. Currently there are no rocketry competitions in Canada. That could change though, and fast.

During the panel discussion, which was moderated by Adam Trumpour, representatives from seven universities discussed their experiences which included their frustration that they have to leave Canada to compete in rocketry competitions. Trumpour tells SpaceQ that during the discussion the idea of holding a competition in Canada really resonated. So much so, that during the discussion three members of the audience, well known individuals professionally involved in the business, each wound up offering $10,000 each for a total of $30,000 towards setting up a competition.

A couple of reasons rocketry competitions aren’t held in Canada are that there is no launch facility in place and current regulations make it extremely difficult to get licensed to launch rockets, including sounding rockets.

Adam says that he’s been tasked to help get the venture off the ground and will approach the Canadian Space Agency formally at some point to participate.

It was the last session of the conference and something new was created. More to follow.

Boucher is an entrepreneur, writer, editor & publisher. He is the founder of SpaceQ Media Inc. and CEO and co-founder of SpaceRef Interactive LLC. Boucher has 20+ years working in various roles in the space industry and a total of 30 years as a technology entrepreneur including creating Maple Square, Canada's first internet directory and search engine.
@marckboucher
Previous Planet and KSAT Threaten to Pull Ground Station Assets out of Canada (Updated)
Next Women in Planetary Science and Exploration Conference Highlights Humanity as Well as Research 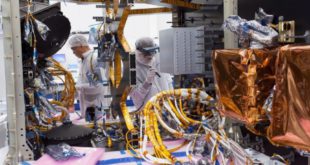