Seeing the Personal Side of Science, With the First Ever Story Collider in Canada

Funny, emotional, and intimate stories through Story Collider were a new addition to this year’s Science Literacy Week events.

This year, about 800 science-related events took over Canada’s libraries, universities, museums, and even some streets during Science Literacy Week (September 18-24). This was far more than what the recent graduate, Jesse Hildebrand, had dreamt of when he walked into University of Toronto’s libraries a day after his graduation in 2014, asking if they would showcase science books instead of typical popular fiction books for a week. Science Literacy Week is a week-long celebration of scientists and science communicators as they share engaging science activities from coast-to-coast.

When SpaceQ asked Jesse Hildebrand, the founder of Science Literacy Week, if he had any favourite events this year, he said: “while I might have a different answer if I could have seen them all, it was a tie between Story Collider, in its first iteration in Canada and a live storytelling event, and From Euclid to Einstein – an iconic book showcase on for the fourth year in a row at the Thomas Fisher Rare Book Library.”

Story Collider, a combination of live shows and podcasts, brings together a variety of people – scientists, doctors, actors, comedians, and much more – to share true science-relevant stories. After realizing Story Collider had not come to Canada yet, Hildebrand reached out to Elliann Fairbairn, the founder of SciCommTO, to help organize this event in Toronto for the first time.

Five remarkable storytellers took the stage at the Tranzac Club in Toronto on September 21st with no slides, no images, and no notes, as Story Collider was introduced in Canada.

Cyltia Guy, a PhD Candidate and ACM SIGHPC/Intel Computational and Data Science Fellow in the Department of Ecology and Evolutionary Biology at the University of Toronto, and a real-life bat-woman, was the first storyteller. She spoke about her transformation from hating fieldwork to now loving it, as well as her hilarious up-close and personal interactions with bats.

Next, Dan Weaver, a PhD Candidate in the Department of Physics at the University of Toronto, who studies climate change and the Arctic atmosphere, shared a story that shed light on how politics affect science. He talked about his last research trip to the Arctic, and how he may not be able to go back due to the funding cut for PEARL (Polar Environment Atmospheric Research Laboratory). Located on Ellesmere Island, about 1100 km from the North Pole, this research facility has been around in some form for about 25 years. PEARL carries out significant work for understanding the Arctic, supporting satellite missions, and for understanding big global environmental challenges.

When looking at long-term changes in climate and atmospheric research, these studies cannot afford to have gaps in their data collection. “It’s not only this one facility that is losing funding – even though that’s regrettable – the bigger issue is that the funding program itself has ended, has not been renewed, as not been replaced. There are other research programs that are all looking at an end. The whole field of climate change and atmospheric science in Canada is currently at risk,” says Weaver. His story portrayed the struggle between doing science and funding science, and how connecting these two worlds is at times very difficult.

The third storyteller, Vanessa Vakharia, the founder and director of the Math Guru, shared her journey from failing grade 11 math twice, to going on and becoming a math teacher. Vakharia shared fun anecdotes about her first teaching experience, and showed how the Math Guru is providing students with a different perspective for studying math and science.

Dr. David Evans, the Temerty Chair in Vertebrate Palaeontology, a curator at the Royal Ontario Museum, and an Assistant Professor in the Department of Ecology and Evolutionary Biology at the University of Toronto, told an engaging story about one of his field works in South Africa. He compared his incredible search for dinosaur eggs to an Easter egg hunt, demonstrating how perseverance pays off.

The final storyteller, Dr. Renee Hlozek, shared a moving story about the death of her father and the death of stars. Dr. Hlozek, an assistant professor at the Dunlap Institute within the Department of Astronomy and Astrophysics at the University of Toronto, a Rhodes Scholar and a Senior TED Fellow, talked about how she had thrown herself into her studies and fascination for cosmology as a way of dealing with the pain of losing her father.

This was not Dr. Hlozek’s first Story Collider. She had previously shared a story in Cambridge, Massachusetts. “What I like about Story Collider is that it gives you a personal look at who scientists are, and also what science means to people. It means so much to different people, and it’s easy to forget that. Not only does Story Collider bring science to more people, it brings science to people in new ways,” says Dr. Hlozek.

Story Collider is an alternative way for sharing science with the public. When SpaceQ asked Dan Weaver how Story Collider differs from other science communication efforts, he responded: “It’s a personal narrative that allows me to really share my experience in science and to bring people into those moments where I’m trying to accomplish something and there are struggles, and to share that with people very directly. People relate to personal stories in a way that they don’t necessarily relate to a lecture.”

Aside from the incredible stories told at the Story Collider, many other science communication and engagement events took place in celebration of Science Literacy Week across Canada. This year, the Natural Sciences and Engineering Research Council of Canada (NSERC) and Indigo Books were the major national partners for Science Literacy Week.

Sara is a planetary geologist and science communicator with a passion for sharing the wonders of the universe with the public. Sara started writing for SpaceQ in September 2017.
@MazroueiSara
Previous Canadian Space Agency President Speaks to a Primarily Student Audience at the Montreal Space Symposium
Next Editorial: Bill C-58 Will Make the Government Less Transparent 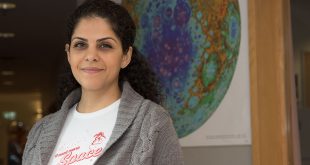