‘Oumuamua May Have Opened the Door for Other Interstellar Visitors

This artist's concept from an animation shows the interstellar asteroid 1I/2017 (`Oumuamua). Observations with ESO's Very Large Telescope and others have shown that this unique object is dark, reddish in colour and highly elongated. Credit: European Southern Observatory.
Share

One of the biggest astronomy discoveries of 2017 was the first detection of an interstellar object visiting our Solar System by Canadian Dr. Robert Weryk.

On October 19, 2017, Dr. Weryk was looking through the data from the Pan-STARRS1 survey, searching for Near-Earth Objects (NEOs), when he noticed something odd.

Astronomers detect NEOs by comparing images of the same patch of sky night after night, looking for objects that have moved. They then use computer models to predict their orbits and do follow up observations to make sure the object is following the predicted path. NEOs, including asteroids, follow an elliptical orbit similar to those of planets, due to our Sun’s gravity. On October 19th, Dr. Weryk noticed that a bright object detected on October 18th was not following a usual NEO elliptical orbit.

Dr. Robert Weryk, a post-doctoral researcher at the University of Hawaii Institute for Astronomy who received his PhD from Western University in London, along with Dr. Karen Meech and an international team of astronomers, used the Pan-STARR1 telescope at Haleakala Observatory in Maui, to discover an object visiting our solar system for the first time. After the odd movement of the detected object on October 19th, Dr. Weryk contacted other colleagues around the world to carry out follow-up observations. All observations from the Canada-France-Hawaii Telescope (CFHT), the United Kingdom Infrared Telescope (UKIRT), the Very Large Telescope (VLT) in Chile, the Gemini South Telescope, the European Southern Observatory (ESO), and the Keck Telescope on Maunakea confirmed that this object’s orbit and speed was out of the ordinary.

The detected object has been named 1I/2017 U1, with the designation “I” to represent an interstellar object. The object is more commonly referred to as ‘Oumuamua, pronounced HO u mu a mu a, meaning “first messenger from far” in Hawaiian. “‘Oumuamua was travelling at a speed of about 46.2 km/s with respect to the Sun when it was about 1.22 AU from the Sun, where the escape speed is 38.0 km/s,” Dr. Weryk told SpaceQ. “When rockets go around the Earth, they have a certain escape speed that they have to pass. It’s the same thing with the Sun. All the asteroids in our solar system are not moving faster than their escape speed, and that’s why they are gravitationally bound to the Sun” he explained.

Weryk and his team tried to combine the data from multiple observation nights and locations to figure out which part of the solar system ‘Oumuamua came from. The object was on a hyperbolic orbit, unlike any other object in our solar system. Based on its orbit, ‘Oumuamua was identified as an interstellar object, something that astronomers have been waiting to see in our solar system for centuries.

In their Nature paper, Dr. Meech and her colleagues show the extreme orbit of ‘Oumuamua. This object also shows substantial changes in its brightness by several magnitudes, changing periodically as it spins on an eight-hour period. “Looking at the light curve or brightness of an object tells us about its shape,” says Dr. Weryk. ‘Oumuamua has a very elongated shape, with an aspect ratio of 10:1. This means that its length is 10 times its width, with the rough dimensions of 400 x 40 meters.

When ‘Oumuamua entered our solar system, it was moving at a speed of roughly 26 km/s, a speed 5-10 times faster than the most distant asteroids and comets in the Oort cloud, the furthest parts of our solar system. It did not show any cometary activity such as gas streaming off its surface or an ice or gas tail; further suggesting that ‘Oumuamua is not a comet from the Oort cloud.

Astronomers are still trying to answer where ‘Oumuamua came from. The most plausible explanation is that ‘Oumuamua was ejected from another solar system, similar to how many icy objects were ejected from our solar system in its early formation days. The least likely scenario is perturbation from an unknown planet or Planet X. “If you backtrack its orbit, it seems that we bumped into this object, rather than this object bumping into us,” says Dr. Weryk. ‘Oumuamua appears to have come from the direction of the star Vega in the Lyra constellation, which is the general direction that our solar system orbits the galaxy. It is possible that this object has orbited the galaxy many times.

There is still debate about whether ‘Oumuamua is an asteroid or a comet, which can only be settled with more detections of interstellar objects. ‘Oumuamua is very red in colour, similar to some Kuiper belt objects or D-type asteroids as far as Pluto. The red colour of D-type asteroids is due to its composition of mainly organic-rich silicates. Dr. Weryk and his team believe that ‘Oumuamua is more likely to be an asteroid due to its lack of typical cometary activity and its red colour.

A different group of astronomers lead by Dr. Alan Fitzsimmons from Queen’s University Belfast in Northern Ireland, suggest that ‘Oumuamua is actually more similar to a comet than an asteroid in a recent paper published in Nature Astronomy. They believe that the Oort cloud has lost many small icy objects over the years due to gravitational pull from other stars, and therefore, it is more likely that an icy comet would visit our solar system. The spectroscopic studies of ‘Oumuamua do not match the description of minerals on the surface of asteroids seen in our solar system. Rather, ‘Oumuamua is more similar to those of icy objects in our outer solar system.

Reviewing older literature on what happens to icy bodies when they are exposed to energetic particles and cosmic rays for a long time, Dr. Fitzsimmons and his colleagues summarized that the surface layers of these icy bodies could evaporate due to the cosmic environment. The leftover material then transform themselves into a rigid surface held together by carbon compounds, which gives an object a reddish colour – similar to that of ‘Oumuamua.

Dr. Fitzsimmons and his team used computer modeling to figure out the behaviour of ‘Oumuamua. They observed that even if ‘Oumuamua had roughly a 50cm thick crust, it would protect the object’s core from the heat of the Sun or other stars, therefore not showing any signs of a typical comet, such as a gas and dust tail.

Even though ‘Oumuamua’s arrival in our solar system was pretty unique, astronomers believe that we will see more common occurrences in the future. They believe similar objects have previously visited our solar system undetected. The inability to detect previous interstellar objects could have been due to the faintness of some of these objects, or simply because astronomers were not looking for a motion like that of ‘Oumuamua.

The Pan-STARRS telescope located at Haleakala Observatory in Maui, Hawaii, is 1.8m in diameter, with a wide field of view of 3 degrees. It is 90% dedicated to finding new NEOs and scans the sky on clear nights searching for them. “There are 1450 NEOs detected that haven’t had follow ups yet,” says Dr. Weryk. It could be that some of these objects also had parabolic orbits, but astronomers previously did not know to look in those directions. Ground-based telescopes such as Pan-STARRS, as well as space-based telescopes such as Hubble and Spitzer will be watching out for other interstellar visits to our solar system.

Sara is a planetary geologist and science communicator with a passion for sharing the wonders of the universe with the public. Sara started writing for SpaceQ in September 2017.
@MazroueiSara
Previous Canada Taking Next Steps to Continue Leadership of Robotic Manipulators for Future Space Missions
Next Telesat Nervously Awaits Indian PSLV-C40 Launch 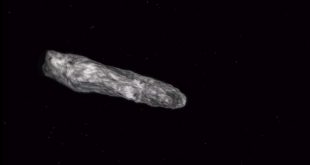 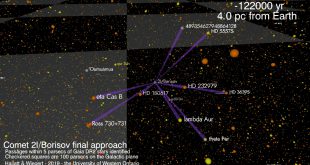