On May 2, the Honourable James Moore, Minister of Canadian Heritage and Official Languages, unveiled the permanent Canadarm display at the Canada Aviation and Space Museum. Canadian Space Agency Astronaut Chris Hadfield assisted in the inauguration of the exhibit from orbit as Commander of the International Space Station – a role made possible due in part to the contributions of the Canadarm. 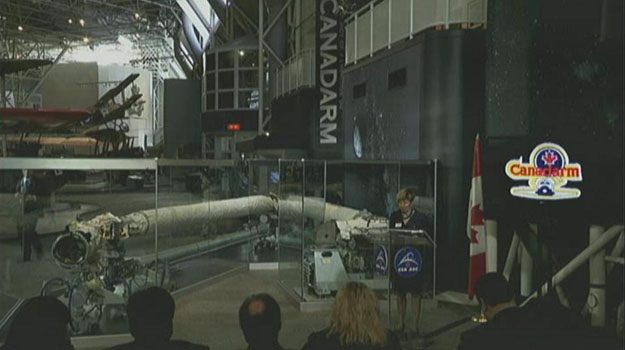 New Canadarm exhibit is unveiled in Ottawa Credit: CSA
The CSA created an interactive exhibit displaying the Canadarm, which allows visitors to navigate through the history of the robotic arm, including its greatest achievements and how its legacy continues to live on today in medical robots used in neurological and pediatric surgery.
“We invite Canadians to see space history for themselves, and tell their children and grandchildren how proud they were to see Canada on the forefront of global innovation,” said Gilles Leclerc, Acting President of the CSA.
“Our Government is proud that the Canadarm, a national icon, is going to be housed within one of our great national museums,” said Minister Moore. “We believe strongly in our national museums, and we recognize the tremendous value they hold for all Canadians as guardians of our heritage.”
In 2011, the Canadarm wrapped up 30 years of operations supporting the U.S. Space Shuttle Program. The CSA negotiated with NASA the return of this original shuttle robotic arm. Upon its return, the 15-metre arm was sent first to MacDonald, Dettwiler and Associates (MDA) in Brampton, for a thorough evaluation and preparation for its public display.
For other SpaceRef articles on the Canadarm display, see
Original Shuttle Canadarm to be Displayed at Museum in Ottawa
Canadarm Heads Home but How Many Canadians Will See It?
MDA Union Wants Canadarm to be Displayed in a Museum
Canadian Space Agency Requests Proposals To Display Canadarm At St. Hubert Headquarters
The Canadarm Is Returning Home
Endeavour’s Canadarm Headed to Ottawa Museum UPDATED