The second offering of the Canadian Satellite Design Challenge (CSDC) is well underway. Teams from across the country met recently to participate in workshop and mission concept presentations.

The Canadian Satellite Design Challenge (CSDC) is a competition for university students to design and build a small, operational “cubesat” satellite which is about half the size of a shoe-box, weighing no more four kilograms (9 pounds), based on commercially-available, “off-the-shelf” components. The satellites will undergo full launch and space environment qualification, and the ultimate goal of the CSDC is to launch the winning satellite into orbit in order to conduct science research.
The first CSDC took place in 2011-2012. Teams from thirteen universities participated.
The winner, Concordia University, was announced at a gala evening in Ottawa on September 29, 2012. It is hoped that the winning satellite will be launched into orbit, although no date has been announced for a launch. 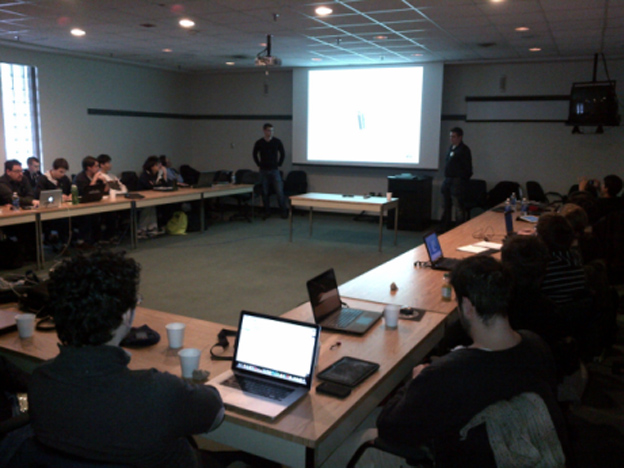 CSDC workshop at MDA Credit: CSDC
From February 19-20, 2013, almost 30 representatives from all 10 teams met at MDA’s facility in Brampton, Ontario for a spacecraft design workshop. The workshop included presentations on various spacecraft and mission design elements, such as communications sub-systems, power systems and budgets, and structural and thermal analysis.
Each team presented on their mission concept and provided a brief overview of their planned mission. The payload ideas were diverse and impressive:
Langmuir probe to measure radiation
“Drag sails” to de-orbit the cubesat quicker
“Tardigrade” biological survival experiment
Self-healing structural material
Cosmic ray sensor
Properties of a diamagnetic material
Arctic sea ice mapping by GPS reflectometry
Luminous bacteria experiment
The teams will now progress with the design of their cubesats in preparation for the Critical Design Review, which will take place at the end of September.
Larry Reeves of the sponsoring organization Geocentrix is the President of the
CSDC Management Society. He writes the following:

The CSDC Management Society (CSDCMS) would especially like to thank:
Lynne Vanin, of MDA (Brampton, ON) for hosting the workshop, and for arranging a tour of the impressive facility for the attendees and giving them a glimpse into MDA’s current projects;
Hugh Chesser of York University, for giving several presentations on cubesat design;
Dr. Alfred Ng of the Canadian Space Agency for sharing his experience and expertise, and giving a presentation on CSA’s QuickSat mission;
Dave Cooper of Microsat Systems Canada Inc., for hosting the participants (about twice as many as the MSCI Boardroom should comfortably or legally hold), and for giving a presentation on the just-launched NEOSSat mission and MSCI’s planned Commstellation mission;
Wendy Keyzer, of MDA (Richmond, BC) (and CSDCMS Board member), for her assistance in arranging logistics for the workshop.
The CSDCMS would like to express its sincere appreciation to all who continue to support the Canadian Satellite Design Challenge. All participants and teams have shown impressive dedication, energy, capability, and innovation on their projects. The CSDC is extremely fortunate to be able to foster and witness these qualities in the participants. 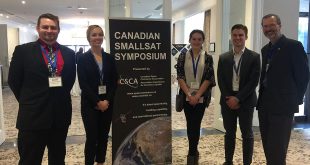