Earlier this month the Canadian Armed Forces announced that a new Space Specialist Skill Badge had been created for personnel who had achieved formal qualifications and experience.

In an email with SpaceQ outgoing BGen Kevin G. Whale, Director General & Component Commander – Space, Royal Canadian Air Force said “this is another significant step forward as we advance and normalize space as an integrated element of Canadian Armed Forces (CAF) operations and a long overdue recognition of the expertise of our growing Joint Space Cadre.”

The RCAF describe the badge as follows:

“The metal badge of a silver colour is aimed to reflect diverse space mission area qualifications and experience. The design element of the badge holds significant meaning. The maple leaf, a symbol long associated with Canada, identifies the wearer of the badge as having met the qualifications and experience of CAF personnel employed in a Space role. The globe represents the earth as viewed from space. It is centered as it is both the origin and the control point for all satellites. The lines of latitude and longitude emphasize the global nature of space operations. The satellite that surrounds the globe represents Alouette I, the first Canadian satellite. Its ellipses represent the orbital paths traced by the satellites in orbit. Finally, the base upon which these elements rest – the laurel wreath – symbolizes the excellence in training and execution of duty.”

“The Space SSB was endorsed as a Specialist Skill Badge at a National Defence Clothing and Dress Committee in October 2019. CAF SSBs are intended to recognize exceptional qualifications – in this case, the fast-evolving space discipline. Core Joint Space cadre positions include those where the majority of primary duties are dedicated to the development, employment, or generation of space capabilities.”

Boucher is an entrepreneur, writer, editor & publisher. He is the founder of SpaceQ Media Inc. and CEO and co-founder of SpaceRef Interactive LLC. Boucher has 20 years working in various roles in the space industry and a total of 30 years as a technology entrepreneur including creating Maple Square, Canada's first internet directory and search engine.
@marckboucher
Previous SpaceX Crew Demo 2 passes Flight Readiness Review
Next SpaceX Crew Demo 2 launch a unique moment

Militaries of Canada, the US and five other nations author Combined Space Operations Vision 2031 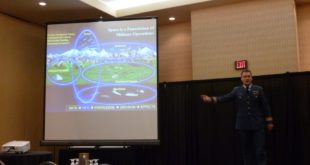 The Passing of Kenn Rodzinyak