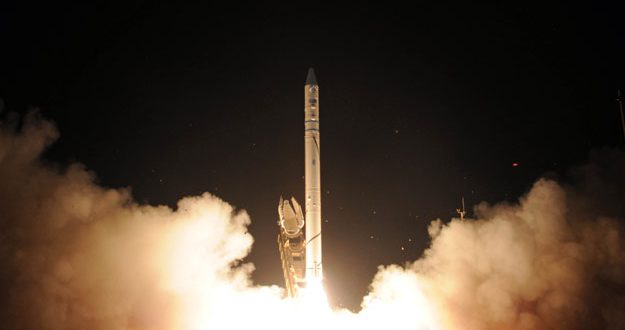 Israel, a country of close to 8 million people with an approximate $80 million space budget, both civil and military, is ranked 9th in the world in the latest edition of Futron’s Space Competitiveness Index. This, despite having less than 1/10th the GDP than four of the countries ahead of it and 1/5th of the other four. Israel is also part of a small exclusive group of nations that has the ability to both manufacture and launch its own satellites. To say that Israel is punching above its weight is an understatement. How did it reach this status? Out of sheer necessity.

Israel’s space program dates back to 1961 when the National Committee for Space Research began developing a research and education plan as part of the newly created Israel Academy of Sciences and Humanities. It wasn’t long though before the military took the lead in space activities.

On July 5th, 1961 Israel launched its first sounding rocket, named Shavit 2, a solid fuelled two-stage rocket with a meteorological payload. According to Owen Sirrs in his book “Nasser and the Missile Age in the Middle East”, Sirrs speculated that “Israel probably sought to instill the notion that it had already launched an earlier version of the rocket” but hadn’t announced it. Clearly the launch was primarily executed out of national interest rather then scientific curiosity.

It is Israel’s national interests that drove its early space program with the military taking the lead. With regional wars and unrest throughout much of the 60’s and into the 70’s, intelligence gathering became critical.

Little information is public on the activities of the military who led the effort during those early days. But what is clear is that from the early “political launch” of the Shavit 2 in 1961, the groundwork was laid for what would become the Israeli space program which was created 22 years later in 1983.

The Israeli Space Agency (ISA) will celebrate its 29th anniversary on September 19. What is has accomplished in that time frame on a small budget is remarkable. And while most of the success is derived from military needs, there are signs that the civil and commercial programs are set for further growth going forward.

After the October 1973 war, and ironically with the signing of the peace treaty with Egypt in 1979, Israel’s inability to fly spy planes over the Sinai for intelligence gathering and lack of timely satellite intelligence data from its allies led to the decision that it could only rely on themselves for timely satellite reconnaissance.
Israel used its Shavit (meaning comet) launch vehicle, based on the military-developed Jericho missile, as the basis of its first space launch vehicle. Israel began developing the new rocket in 1982 and successfully launched its first space rocket with an experimental payload on September 19th, 1988 – exactly five years after the creation of the ISA.

Israel uses the Palmachim Air Force Base on the Mediterranean coast for its launches. All told since the inaugural launch in 1988, Israel has conducted nine launches of which three have failed. All launches from Palmachim head west over the Mediterranean so as not to fly over their regional neighbors who might interpret the launch as hostile.

By being forced to launch west, Israeli launched satellites use a retrograde orbit. Retrograde orbits are infrequently used as they require extra velocity and fuel to get their payloads into orbit and go in the direction which is opposite of the rotation of the Earth.

While Israel has the capability to launch its own satellites, the Shavit launcher, while capable and upgraded over the years, is limited by geography and weight in what it can launch. This has led Israel to consider other foreign launch sites for the Shavit.

Israel’s next reconnaissance satellite to launch will be the Ofeq-10. It will be the largest Israeli reconnaissance satellite launched to date at around 400 kilograms and should be ready sometime in 2013. According to Israeli sources, the upgraded Shavit is now capable of launching a satellite as heavy as Ofeq-10.
While several launch sites have been considered including the European Space Agency’s Kourou launch site in French Guiana, the Italian Space Agency Luigi Broglio Space Centre (formerly known as San Marcos) near Malindi off the coast of Kenya and Alcantara in Brazil, it would seem the latter would have the inside edge based strictly on availability.

Kourou has a busy schedule now that Soyuz and Vega launches have been added to the manifest alongside the Ariane, while Luigi Broglio won’t be ready for some time as it is scheduled to be upgraded and hasn’t had a launch since 1988. Alcantara would be a suitable location however technical and financial difficulties have put a planned 2013 inauguration in doubt. And although Israel signed an agreement with Brazil in 2003 to use Alcantara, it seems unlikely to use the spaceport in the near future as the Ukraine has become Brazil’s main partner in developing and using the site.

There are however two other locations Israel could use. According to our sources the climate and ease of restrictions within the United States has changed to the point where it might be possible for Israel to use a U.S. launch site, perhaps the rejuvenated Mid-Atlantic Regional Spaceport which is the commercial portion of the Wallops Flight Facility in Virginia.

Another location could be Canada. The current Canadian government led by Conservative Prime Minister Stephen Harper considers Israel a very close ally and relations have never been closer. Canada has been one of Israel’s longest and strongest supporters going back to the foundation of Israel. Should Israel and Canada consider such a partnership it would help both countries. Canada offers Israel a great and secure launch location. In return, Israeli built rockets launched on Canadian soil could serve Canada’s needs. Canada is the only top ten space nation without rocket launch capability or a program in place to develop one.

The Canadian military is clamoring for launch capability and there is the need to launch small research satellites. The government which launched an independent aerospace review earlier this year seems unlikely to provide the funding for a Canadian only launch solution. Locations in Canada include previously used Fort Churchill, Manitoba and a new undeveloped site in the eastern end of Nova Scotia which had been considered for a commercial venture which never materialized. Coincidentally, Steve MacLean, President of the Canadian Space Agency is scheduled to speak at the Israeli 8th Ilan Ramon International Space Conference this coming January on international cooperation.

Should Israel not find a suitable foreign launch location for the Shavit in time for the Ofeq-10 launch, and this seems unlikely at this time, it would have to use a foreign rocket, which is not what it wants to do. In that case it would look towards Russia and possibly India, though India’s launch manifest is quite full for the next two years.

In 2010, Israel’s government notionally approved an updated space policy but it has yet to be released to the public. The new policy would see an increased civil space budget that would be on par with the current defense space budget effectively doubling the current budget. However, the increase in budget has yet to materialize and until it does, new initiatives are on hold. Currently the overwhelming majority of the Israeli space budget is allocated to the military.

Commercially, Israel’s small size hampers its ability to build a robust domestic market. Therefore much of its efforts going forward are geared to the international market, save for the domestic telecommunications market. One area Israel has had to focus on because of its inability to launch eastward is satellite component miniaturization. To save on weight, Israel has become adept at building small and microsat components for its satellites. In doing so, it has found an interested international market for its technology. Going forward, this is one area Israel could further capitalize on.

Israel also has plans to be land on the moon. At least that is the ambition of the Space IL Google Lunar X Prize entrant. The privately funded team made up of enthusiasts, both professional and amateur shouldn’t be taken lightly. Galvanizing support in Israel and globally, the team is using Israel’s expertise in miniaturization to build what could be the smallest spacecraft in the contest. With several years to go before and actual launch needs to happen to win the contest, the one tangible benefit at this point is an increased national awareness and engaged student population in Israel.

For Israel, military necessity has been the driver of its space program. There is however a concerted push for an increased civil space program. In early 2011 Israel signed a cooperation agreement with the European Space Agency (ESA) after four years of discussions. The objective of the agreement is for Israel and ESA to create a framework for cooperation in future ESA projects. The agreement is usually an important step in the eventual process of becoming a full member of ESA, though that could be many years away if it was to happen at all.

Boucher is an entrepreneur, writer, editor & publisher. He is the founder of SpaceQ Media Inc. and CEO and co-founder of SpaceRef Interactive LLC. Boucher has 20+ years working in various roles in the space industry and a total of 30 years as a technology entrepreneur including creating Maple Square, Canada's first internet directory and search engine.
@marckboucher
Previous Canadian Satellites Finally Set For Launch on Indian Rocket
Next Annual Canadian Space Summit to be held in London Ontario in November

Space is the Next Military Theatre

Canada Gets Its Own ‘Space Force’