Estimated to have been a 9 tonnes in size a meteorite streaked across the sky over the Ural mountains in Russia and exploded at 30 to 50 kilometres above ground. The supersonic reentry and debris injured an estimated 1100 people according to reports in Russia. Part of the meteor crashed into a frozen lake. An estimated 3000 buildings were damaged in the city of Chelyabinsk including the roof collapsing at a zinc factory.

The meteor over Russia is not related to the Asteroid 2012 DA14 which will have its closet approach to Earth this afternoon at 2:25 p.m. EST. SpaceRef will have live NASA commentary starting at 2:00 p.m. EST on the SpaceRef home page (http://spaceref.com).
From Russia Today “a series of explosions in the skies of Russia’s Urals region, reportedly caused by a meteor shower, has sparked panic in three major cities. Witnesses said that houses shuddered, windows were blown out and cellphones stopped working. Atmospheric phenomena have been registered in the cities of Chelyabinsk, Yekaterinburg and Tyumen. Lifenews tabloid reported that at least one piece of the fallen object caused damage on the ground in Chelyabinsk. According to preliminary reports, it crashed into a wall near a zinc factory, disrupting the fiber-optic connections of internet providers and mobile operators. Witnesses said the explosion was so loud that it resembled an earthquake and thunder at the same time, and that there were huge trails of smoke across the sky. Others reported seeing burning objects fall to earth.”
More pictures, videos, etc.

Boucher is an entrepreneur, writer, editor & publisher. He is the founder of SpaceQ Media Inc. and CEO and co-founder of SpaceRef Interactive LLC. Boucher has 20+ years working in various roles in the space industry and a total of 30 years as a technology entrepreneur including creating Maple Square, Canada's first internet directory and search engine.
@marckboucher
Previous Inspiring: Space Jam of Is Somebody Singing?
Next Chis Hadfield's Space Kitchen 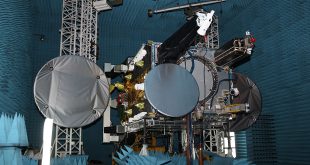