Maritime Launch Services (MLS) is set to submit its environmental assessment report likely by the end of the month for review by the government of Nova Scotia for its spaceport.

It’s been almost a year to the day since MLS selected the Canso Hazel Hill area of Nova Scotia to be the home of Canada’s only commercial spaceport. It seems longer as the expectations within the space community are such that every nuance of the MLS project is highly anticipated.

The review, which has taken longer to complete than was originally expected, is being conducted by Strum Consulting for MLS.

Once the environmental assessment report is submitted and accepted by Nova Scotia Environment, the government will conduct a 50 day review. In the first 30 days of the review the public has an opportunity to provide their comments. Once the 50 day review is over, the Minister of Environment will make public their decision.  Options for the Minister include green lighting the project to proceed, with or without conditions, or the Minister could delay approval pending submission of more information.

As part of the project process MLS has created a Community Liaison Committee (CLC) of local residents, a representative from the Municipality and from MLS. “The CLC will meet regularly for the purpose of providing a forum for sharing information and to provide a way for members of the community to bring their concerns to the Project team, so they can be rapidly addressed and resolved. The first CLC meeting was held in Little Dover on December 13, 2017.”

In the second open house held last December, MLS outlined some of the benefits of the projects. This included “launch Site construction and operation Capital Investment in Nova Scotia – $155M Initial Capital Investment, $15M Annual Operating Expenses.” They also discussed the type of jobs that would be created and offered some projections as outlined in the chart below.

In an email exchange with Steve Matier, CEO of MLS, Matier told SpaceQ that “while we hope it (the review) comes through without any issues to resolve, it may. We have certainly done our homework, though.”

According to Matier the next step for the Department of Natural Resources will be to “finish their integrated resource management review. If there are no issues with that, we then have to get a crown land certified surveyor and appraiser to verify the land request acreage and valuation. After that, there is a final approval at the provincial government level. I would like to have that all completed by the end of June if possible.”

Should MLS get the approval to go ahead from the Minister of Environment and the Department of Natural Resources by the end of June, the last step will be to secure and then announce their initial funding. Matier said “we will make an announcement about our investment status following this process. There are investors that are keying off of us actually having possession of the land. We’ve come a long way since we made our site selection announcement last March 14th and we’ve been receiving excellent support at every turn.”

Once all theses steps are complete MLS will break ground and begin construction. Although they had wanted to break ground by May 1st, they now appear to be aiming for no earlier than July which is only a few months after their initial timetable.

Boucher is an entrepreneur, writer, editor & publisher. He is the founder of SpaceQ Media Inc. and CEO and co-founder of SpaceRef Interactive Inc. Boucher has 20 years working in various roles in the space industry and a total of 28 years as a technology entrepreneur including creating Maple Square, Canada's first internet directory and search engine.
@marckboucher
Previous UrtheCast CEO Wade Larson Steps Down as Company Struggles to Close Financing
Next Improved Ship Tracking Key in exactEarth’s Strategic Alternative Search 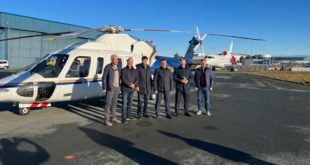