Canada and the United States share a deep history of collaboration in space.

In 1962, when Canada became the third country in the world to design and build its own satellite, it was an American rocket that launched Alouette 1 into space. When NASA’s Apollo 11 landed on the Moon in 1969, it touched down on Canadian-made legs.

One of the most recognized Canadian innovations, the Canadarm, played a crucial role on NASA’s shuttle program and has been a key element in both the construction and success of the International Space Station. Vice-versa, these programs have provided Canada and Canadian astronauts with exceptional opportunities.

As Sylvain Laporte, President of the Canadian Space Agency, emphasized in a talk last month at the Wilson Center in Washington, DC, the Canada-US relationship in space is “a very, very good illustration of how two countries can collaborate successfully.”

The recent successful launch of the fourth Advanced Extremely High Frequency (AEHF-4) military communications satellite highlights the role of Lockheed Martin in the increasingly close ties between Canada and the US in space exploration and technology.

Canada was the first international partner to communicate using the Lockheed Martin-built AEHF constellation that delivers vital connectivity to armed forces around the globe, making the men and women who defend our countries safer and more effective. AEHF communications are jam-proof and offer low probability of detection or interception. According to Mike Cacheiro, Vice President of Protected Communications at Lockheed Martin, “this fourth satellite will complete a worldwide ring of AEHF satellites to deliver global extended data rate (XDR) coverage for the U.S. Air Force and for the partner nations – Canada, the Netherlands and the United Kingdom – that also connect to the AEHF network.”

Lockheed Martin’s expertise in space and satellite technology reaches back to the very beginning of the space age with the development of the Viking sounding rocket, which took the first photographs of Earth from space, and as a partner on the Apollo missions, which brought the Moon landing.

Today, Lockheed Martin is building the Orion Multi-Purpose Crew Vehicle for NASA, the next generation of human exploration spacecraft. The world’s only exploration-class spacecraft will take us farther than we’ve gone before. Orion will play key part in NASA’s Deep Space Gateway program that will see humans travel to the Moon, Mars and beyond.

Lockheed Martin’s leadership in space exploration has a direct connection to Canada when it comes to NASA-led OSRIS-REx mission to asteroid Bennu and InSight mission to Mars.

Launched this past May and scheduled to arrive by the end of November, Lockheed Martin’s InSight will be the first lander to peer beneath the surface and take the vital signs of the Red Planet. The objective is to better understand how other rocky planets, including Earth, evolved and Canadian researcher Professor Dr. Catherine Johnson of the University of British Columbia is playing a key role on the international science team.

Meanwhile, shortly after InSight is scheduled to land on Mars, OSIRIS-REx will rendezvous with asteroid Bennu in early December. Designed and built by Lockheed Martin, this spacecraft is part of the first US mission to collect a sample of an asteroid and return it to Earth — giving scientists insight into the early formation of our solar system, and may provide clues to the origin of life on Earth. Canada is a key partner with the Canadian Space Agency’s OLA (short for OSIRIS-REx Laser Altimeter) playing the essential role of mapping the asteroid and helping select a spot where the spacecraft can make contact to secure a sample. This innovative instrument was built by MDA, Canada’s leader in space technology with its roots in the development of the Canadarm, along with significant contributions from subcontractor Toronto-based Optech.

Despite all these incredible achievements, it is clear that even more collaboration is just beyond the horizon. At an inspiring event last month hosted by Actua at the Canada Aviation and Space Museum with participation by The Honourable Navdeep Bains and The Honourable Marc Garneau, Canadian and American students had the opportunity to speak live with Astronaut Drew Feustel (who embodies our partnership since he has dual citizenship) as he orbited above on the International Space Station. From our return to the Moon to taking our first steps on Mars, it is amazing to think what these young people will witness over the course of their lifetimes and I am certain that the Canada-US partnership play a key role in realizing these milestones.

Boucher is an entrepreneur, writer, editor & publisher. He is the founder of SpaceQ Media Inc. and CEO and co-founder of SpaceRef Interactive LLC. Boucher has 20+ years working in various roles in the space industry and a total of 30 years as a technology entrepreneur including creating Maple Square, Canada's first internet directory and search engine.
@marckboucher
Previous The Space Generation Advisory Councils Looks to Grow in Canada
Next Perimeter Institute – Artificial Intelligence and the Complexity Frontier

MDA gets sizeable contract from Lockheed Martin for antennas 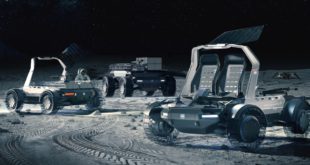