Is Canadian Sovereignty at Risk by a Lack of an Indigenous Satellite Launch Capability?

Development Costs and Timeframe for a New Launcher
What would it cost and how long would it take to develop an indigenously small satellite launcher? That depends on who runs the program and their level of expertise. According to Canadian Space Agency officials it would take 10 to 12 years for a full-scale project to design and build a small satellite launcher. That seems rather slow considering recent developments.
Space Exploration Technologies or SpaceX as it is know as, a private company, ironically founded by Elon Musk a South African with Canadian roots, as his mother is Canadian, briefly worked and went to university in Canada before leaving for the United States, accomplished there what Canada may try to accomplish now. SpaceX has built not only a small launcher in the Falcon 1 and 1E but also a heavy lift launcher in the Falcon 9, all in eight years as well as developing and flying the Dragon multi-purpose spacecraft. SpaceX has disrupted the market with its ability to deliver products that work, that are cheaper and took less time to develop than any other company or government has in the past. Musk says his companies accomplishment are in part due to the past work of NASA and all those how that preceded them. That is true, but it took vision, skill, determination and innovation to accomplish what they have in those eight years.
Can a Canadian effort replicate this? That is unlikely especially if the effort is led by the government. However there are many lessons to learn from SpaceX which could make a Canadian launcher program take less time, be cost effective and innovative to reduce the cost of each launch.
What would it cost to develop a new launcher? Once again this depends on who is building the launcher and the level of expertise of their team. An industry expert familiar with the costs of SpaceX said it would cost between $100-$150 million if done in the manner that SpaceX did it. The difference in price depends on the level of experience of the team and whether you would be developing multiple launch sites as SpaceX originally did with their Kwajalein and Vandenberg launch sites. Unless Canada developed the launcher in a private-public partnership model I doubt they could keep the costs so low.
Canada has an abandoned launch site in Churchill, Manitoba on the western shores of Hudson Bay. While in disrepair it could be the site of a new launcher. A launch site in Nova Scotia has also been discussed in the past.
The Churchill launch site was developed mid-1950s for military applications and eventually became a hub for sub-orbital launches of sounding rockets. The sounding rocket used was the Black Brant, a Canadian designed rocket built by Bristol Aerospace in Winnipeg, Manitoba. To date over 800 Black Brants of various versions have been launched from Churchill and other locations.
It should be noted that a small satellite launcher would not be capable of launching the Radarsat Constellation satellites. A medium to heavy lift launch vehicle such as the SpaceX Falcon 9 would be needed. If Canada was successful in developing a small satellite launcher there is no reason it could not cost effectively develop a medium to heavy lift launcher capable of launching a Radarsat sized satellite.
National Strategic Interest
Canadian national strategic interests must be taken into account when considering whether to begin development of an indigenous satellite launcher program. Canada must ensure access to space for civil and military satellites. At the moment Canada is at the mercy of foreign launch providers, having to fit in our strategic needs within their launch schedule and sometimes on their terms. So is it in Canada’s national strategic interest to develop a satellite launcher?
With the need for more Canadian satellites, both for civil use and national security, and with a growing number of Canadian satellites already in development it seems Canada has reached the point where this question must be answered. The answer seems obvious when you consider Canadian national strategic interests. After all, if our best friends and neighbours the American have already refused to launch one satellite, what’s stopping them from imposing conditions that aren’t to our liking and refusing us again?
Our reliance on satellites is growing and will continue to grow. If we can’t launch our own satellites and have to rely on others to launch them, sometimes on their terms and their schedule, then I would argue that Canadian sovereignty is at risk.

Boucher is an entrepreneur, writer, editor & publisher. He is the founder of SpaceQ Media Inc. and CEO and co-founder of SpaceRef Interactive Inc. Boucher has 20 years working in various roles in the space industry and a total of 28 years as a technology entrepreneur including creating Maple Square, Canada's first internet directory and search engine.
@marckboucher
Previous This Week in Space for Canada
Next This Week in Space for Canada 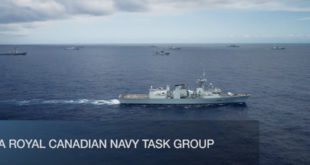 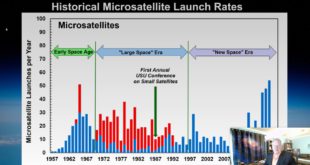 Future directions in small satellites point to autonomy and adaptivity