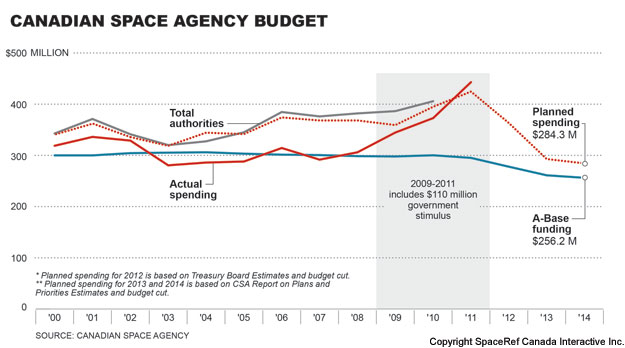 Strategically important flagship projects like RCM not only benefit all Canadians, they also train students and create jobs including the highly coveted Highly Qualified Personnel (HQP) category of jobs. Losing those skills to other sectors, or worse, through migration to other countries can have a long term impact on the country. While this might not be as comparable as the job loss when the then Conservative government shut down the Avro program in 1959, the loss of HQP jobs to the U.S. is very real.
NASA’s John Shannon made the following statement about a year and half ago on the retirement of the shuttle in context of job movement at that time to another historical moment, that of the cancellation of the Avro program in Canada.
“When that program (Avro) was cancelled in Canada in 1959, probably the biggest beneficiary of that cancellation was the Space Task Group at Langley which eventually came to the Manned Spacecraft Center which is now the Johnson Space Center to execute the Apollo program.”
We all know what happened in the sixties with the U.S. space program. Canadians played a critical role, but not in Canada. This is exactly the kind of scenario that could happen again, though this time the Highly Qualified Personnel will be going not to just NASA but competing U.S. commercial space companies like SpaceX, Boeing, Lockheed Martin etc.
How is Canada’s space sector doing?
Well, according to the CSA 2010 State of the Canadian Space Sector report, not too bad. The report, compiled annually through voluntary submission by Canadian companies provides a snap-shot of the sector .
The 2010 data showed total revenues were $3.493 billion, up 14% over the year before, roughly divided between domestic and export markets. Of the $3.493 billion, 79% or $2.729 billion was directly related to Satellite Communications. Of the 79%, 76% was for applications and services such as satellite tv, telephone services etc. A good chunk of that revenue, over $800 million was from one company, Telesat. We’ve yet to see the 2011 report, which won’t come out until November. Early data from public companies would indicate 2011 will show slower growth and stagnating revenues.
It should be noted that in 2010 of the domestic revenues, only 18% came from government sources according to the report. So why does it matter what the government funds and signals with space policy?
The answer is two fold. Canadian businesses rely to some extent on the government moving forward not only with flagship programs, but smaller programs as well, to encourage students to train for careers in the space sector and to retain HQP. This in turn allows these companies to compete for export markets of which the government also has role. You need a certain size domestic market to be able to retain the right kind of jobs to compete for those export markets. So even though the government, at least in 2010, only provided 18% of the domestic revenues, it does play a critical role.
The second part of the answer is that it is the government that sets space policy. And as I mentioned earlier, foreign companies and partners look to the government policy as a signal for the direction the country is headed. This has a direct bearing on the companies in the sector.
There is clear evidence that space is no longer the domain of the few. Emerging space nations number in the dozens now. Canada can choose to remain a leader or become a bit player relying on others for space applications and technology. The decision though is not something to put off until tomorrow, it is a decision that needs to be made now.
The Aerospace Review appears to be one last opportunity for Canadian stakeholders to make it clear what the space sector means for Canada. After that, it’s up to the government to decide on what to do.
One suggestion I would make to the Aerospace Review is that considering the importance space plays in Canadians every day lives perhaps it’s time the CSA, the natural government agency leader, was unshackled from the bonds of Industry Canada and elevated to its rightful place as an independent agency within the government as all the stakeholders had envisioned** when the CSA was being created.
Canada will celebrate its 50th year in space in September with the anniversary of the Alouette satellite. We were the third nation in the world to domestically design and build our own satellite that then made it to space. We’re still considered a top 10 space nation, though our position is falling. There’s still time to remain a leader. But it takes leadership, something we seem to be missing right now.
To read other articles from the June issue of Space Quarterly magazine please subscribe. A single digital issue is $5.95 while a 1 year digital subscription is $19.
—
* Correction to the original article: The Canadian Space Act was amended March 16th and updated May 14th of this year. The President can be reappointed for another term.
** Michael M. Atkinson, William D. Coleman, Obstacles to organizational change: the creation of the Canadian Space Agency (1.6MB PDF), Canadian Public Administration / Administration Publique du Canada, Volume 36, NO. 2 (Summer/Ete), pp. 129-152.

Boucher is an entrepreneur, writer, editor & publisher. He is the founder of SpaceQ Media Inc. and CEO and co-founder of SpaceRef Interactive LLC. Boucher has 20+ years working in various roles in the space industry and a total of 30 years as a technology entrepreneur including creating Maple Square, Canada's first internet directory and search engine.
@marckboucher
Previous Chris Hadfield to Announce New Photo Contest in a Cross-Country Multi-Site Virtual Tour
Next Today is your Last Chance to see the Transit of Venus Until 2117