If Data is the New Oil, is SkyWatch a Potential Unicorn?

SkyWatch has a goal, to democratize satellite data, in particular Earth observation data. With 225 satellites delivering data to SkyWatch and new funding from their Series A, SkyWatch is well on their way.

Canadian space startups are starting to gain more attention as venture capital, in and out of Canada, take notice. Case in point is SkyWatch which announced at the start of the year it had closed a Series A round valued at US$7.5 million (CAN$10 million).

My guest today on the SpaceQ podcast is James Slifierz, the CEO of SkyWatch.

Slifierzs’ and his colleagues original idea of aggregating open source satellite data from NASA observatories won them the global prize in NASA’s space apps challenge in 2014. The company has since pivoted, focusing on open source and commercial Earth observation data.

Slifierzs’ estimates there are about 375 active Earth observation satellites of which his company is already getting data from 225 of them. If data is the new oil, is SkyWatch a potential unicorn? A unicorn is a privately held startup company valued at over $1 billion.

Listen in to my conversation with James Slifierz.

You can subscribe to the podcast using your favourite podcast app (iOS and Android). For apps like Pocket Cast or OverCast you can search using the podcast title SpaceQ.

The podcast is also available on Apple Podcasts, Google Podcasts, Spotify and SoundCloud.

Boucher is an entrepreneur, writer, editor & publisher. He is the founder of SpaceQ Media Inc. and CEO and co-founder of SpaceRef Interactive LLC. Boucher has 20+ years working in various roles in the space industry and a total of 30 years as a technology entrepreneur including creating Maple Square, Canada's first internet directory and search engine.
@marckboucher
Previous Canadian Companies Will Likely Have Double Digit Satellites Launched This Year – The Start of a Trend
Next Terranaut Ewan Reid: From Shuttle and Space Station Support to Creating Mission Control Space Services 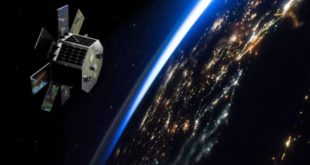