The Evening of Celebration and Inspiration, Celebrating 150 Years of Canadian Science Achievement, lived up to its title at the ninth annual Canadian Science Policy Conference in Ottawa. The lineup of fantastic featured speakers, as well as the presence of sensational scientists and policy makers made for a truly inspiring evening.

The Message: Creating a Science-Literate Society

Payette’s controversial speech resonated well with most of the conference attendees, who were there to learn how scientific research, science communication, and policy go hand-in-hand.

Payette commenced her speech by reminding everyone that we still have a long way to go before we can reach science as a casual conversation at cocktail hour, and to becoming a science-literate species. Meaning a species capable of using science as an undisputable tool for making informed decisions based on evidence, data, and fact; recognizing how science is fundamental in all aspects of our environmental, economical, and social issues. She noted that we are still not there.

“Can you believe that still today in learned society, in houses of government, unfortunately, we’re still debating and still questioning whether humans have a role in the Earth warming up or whether even the Earth is warming up, period,” Payette said. After addressing climate change deniers, she moved on to other beliefs not backed up by science.
[aesop_video width=”100%” align=”center” src=”youtube” id=”Xn5Qmhac5is” disable_for_mobile=”on” poster_frame=”https://media2.spaceq.ca/wp-content/uploads/2017/11/23171126/governor_general_julie_payette_cspc2017.jpg” loop=”off” autoplay=”off” controls=”on” viewstart=”off” viewend=”on” revealfx=”off” overlay_revealfx=”off”]

“We are still debating and still questioning whether life was a divine intervention or whether it was coming out of a natural process let alone, oh my goodness, a random process.” She then continued to talk about alternative medicine and horoscopes. “Some still believe that maybe taking a sugar pill will cure cancer if you will it good enough. That your future, and every single one of the people here’s personalities can be determined by looking at planets coming in front of invented constellations.” Payette then advised the conference attendees on how to address these issues.

The Governor General said that the vast availability of communication means, including the internet and social media, have increased and broadened resources for the public. The era of fake news, and everybody being able to express their opinions with no filter on social media creates room for debate, which could enrich the society if used effectively.

Payette asked her fellow scientists, communicators, and politicians to remain vigilant. “We must be vocal, all the time, everywhere, every single one of us, so that we can deconstruct misinformation and don’t end up in an echo chamber where we’re only listening to what we want to hear.” Later, she ended her speech with saying: “This will require vision, commitment, and leadership.”

Payette’s speech was well received by most of the audience who shared similar goals of engaging the public in science, with the goal of creating a science-literate society. However, it received a lot of backlash from others who thought her speech was a mockery of some beliefs and religions.

The day after Payette’s keynote speech, a panel discussed the importance and key factors of communicating with the public in the “Changing Perceptions: Engaging the Public with Scientists in the Era of Alternative Facts” session. Dr. Chantal Barriault, the Director of Science Communication Graduate Program at Laurentian University, and other speakers in the session revealed that understanding versus agreeing with science facts are two separate issues. Increasing science literacy through science communication and engagement is to help the public understand different issues based on fact and evidence, even if they may not agree with it.

Further in the Science Engagement session, Barriault warned scientists to watch their language, that “other-ing” people will not help advocate and communicate science.

In her well-tailored speech at a science policy conference, Payette encouraged her audience to be vocal and engage in debates with the public to create a more science-literate society. However, as the Governor General, with a much broader audience, she “other-ed” those with different beliefs, which unfortunately created resistance with getting her main message across.

The Honourable Kirsty Duncan, Minister of Science, and Dr. Mona Nemer, the Chief Science Advisor of Canada, shared similar messages in their keynote speeches at the Canadian Science Policy Conference. They encouraged evidence-based decision making and cross-disciplinary research, as well as expressing a need for equality, diversity, and inclusivity in science.

Kirsty Duncan’s advice to the audience was: “tell your stories, explain why your research is important, and how your story is tied to funding.”

Sara is a planetary geologist and science communicator with a passion for sharing the wonders of the universe with the public. Sara started writing for SpaceQ in September 2017.
@MazroueiSara
Previous FCC Grants Access to the U.S. Market for Telesat’s Satellite Constellation with Conditions
Next Maritime Launch Services Targets May 1 to Begin Construction at Nova Scotia Spaceport 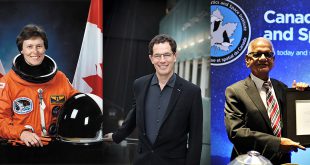 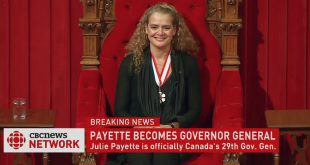