The first of three images of ESO’s GigaGalaxy Zoom project — a new magnificent 800-million-pixel panorama of the entire sky as seen from ESO’s observing sites in Chile — has just been released online. The project allows stargazers to explore and experience the Universe as it is seen with the unaided eye from the darkest and best viewing locations in the world.

This 360-degree panoramic image, covering the entire celestial sphere, reveals the cosmic landscape that surrounds our tiny blue planet. This gorgeous starscape serves as the first of three extremely high-resolution images featured in the GigaGalaxy Zoom project, launched by ESO within the framework of the International Year of Astronomy 2009 (IYA2009). GigaGalaxy Zoom features a web tool that allows users to take a breathtaking dive into our Milky Way. With this tool users can learn more about many different and exciting objects in the image, such as multicolored nebulae and exploding stars, just by clicking on them. In this way, the project seeks to link the sky we can all see with the deep, “hidden” cosmos that astronomers study on a daily basis. The wonderful quality of the images is a testament to the splendor of the night sky at ESO’s sites in Chile, which are the most productive astronomical observatories in the world.

The plane of our Milky Way Galaxy, which we see edge-on from our perspective on Earth, cuts a luminous swath across the image. The projection used in GigaGalaxy Zoom place the viewer in front of our Galaxy with the Galactic Plane running horizontally through the image — almost as if we were looking at the Milky Way from the outside. From this vantage point, the general components of our spiral galaxy come clearly into view, including its disc, marbled with both dark and glowing nebulae, which harbors bright, young stars, as well as the Galaxy’s central bulge and its satellite galaxies.
The painstaking production of this image came about as a collaboration between ESO, the renowned French writer and astrophotographer Serge Brunier, and his fellow Frenchman Frederic Tapissier. Brunier spent several weeks during the period between August 2008 and February 2009 capturing the sky, mostly from ESO observatories at La Silla and Paranal in Chile. In order to cover the full Milky Way, Brunier also made a week-long trip to La Palma, one of the Canary Islands, to photograph the northern skies [1]. Once the raw photographs were in hand, image processing by Tapissier and ESO experts helped to convey accurately the night sky as our eyes behold it [2]. The resulting image is composed of almost 300 fields each individually captured by Brunier four times, adding up to nearly 1200 photos that encompass the entire night sky.
“I wanted to show a sky that everyone can relate to — with its constellations, its thousands of stars, with names familiar since childhood, its myths shared by all civilizations since Homo became Sapiens,” says Brunier. “The image was therefore made as man sees it, with a regular digital camera under the dark skies in the Atacama Desert and on La Palma.”
As photographing extended over several months, objects from the Solar System came and went through the star fields, with bright planets such as Venus and Jupiter. A brilliant, emerald-green comet also flew by, although spotting it among a background of tens of millions of stars will be difficult (but rewarding).
Overall, the creators of the GigaGalaxy Zoom project hope that these tremendous efforts in bringing the night sky as observed under the best conditions on the planet to stargazers everywhere will inspire awe for the beautiful, immense Universe that we live in.
“The vision of the IYA2009 is to help people rediscover their place in the Universe through the day- and night-time sky, and this is exactly what the GigaGalaxy Zoom project is all about,” says project coordinator Henri Boffin.
The second dramatic GigaGalaxy Zoom image will be revealed next week, on 21 September 2009.
Notes
[1] During his quest, Brunier used a Nikon D3 digital camera. The apparent motion of the sky caused by Earth’s rotation was corrected for using a small, precise equatorial mount moving in the opposite direction, which made a whole circle in 23 hours 56 minutes around the Earth’s axis of rotation. Each photo required a six-minute exposure, for a total exposure time of more than 120 hours.
[2] The data processing, using software called Autopano Pro Giga, took great care in respecting the colors and “texture” of the Milky Way. Frederic Tapissier needed about 340 computing hours on a powerful PC to complete the task.
More Information
As part of the IYA2009, ESO is participating in several remarkable outreach activities, in line with its world-leading rank in the field of astronomy. ESO is hosting the IYA2009 Secretariat for the International Astronomical Union, which coordinates the Year globally. ESO is one of the Organizational Associates of IYA2009, and was also closely involved in the resolution submitted to the United Nations (UN) by Italy, which led to the UN’s 62nd General Assembly proclaiming 2009 the International Year of Astronomy. In addition to a wide array of activities planned both at the local and international level, ESO is leading three of the twelve global Cornerstone Projects.
ESO, the European Southern Observatory, is the foremost intergovernmental astronomy organization in Europe and the world’s most productive astronomical observatory. It is supported by 14 countries: Austria, Belgium, the Czech Republic, Denmark, France, Finland, Germany, Italy, the Netherlands, Portugal, Spain, Sweden, Switzerland and the United Kingdom. ESO carries out an ambitious program focused on the design, construction and operation of powerful ground-based observing facilities enabling astronomers to make important scientific discoveries. ESO also plays a leading role in promoting and organizing cooperation in astronomical research. ESO operates three unique world-class observing sites in Chile: La Silla, Paranal, and Chajnantor. At Paranal, ESO operates the Very Large Telescope, the world’s most advanced visible-light astronomical observatory. ESO is the European partner of a revolutionary astronomical telescope ALMA, the largest astronomical project in existence. ESO is currently planning a 42-metre European Extremely Large optical/near-infrared Telescope, the E-ELT, which will become “the world’s biggest eye on the sky”.
Serge Brunier is a French journalist, photographer and writer who specializes in popularizing astronomy. He is a regular contributor to Science & Vie magazine, and to the France Info radio station. He has written numerous popular astronomy books, translated into over ten languages, and is a prize-winning photographer, who has captured images of solar eclipses from the most amazing places in the world. A life-long quest for the best skies in the world led him to Chile.
This whole sky panorama was presented from 25 August till 13 September 2009 in the exhibition “Un ciel pour la planete” (A sky for the planet) in the Atrium of the Monte-Carlo Casino, Monaco. With a giant print of 12 times 6 meters, the exhibition was under the Patronage of The Prince Albert II of Monaco, and showed with images and videos the making of this unique ESO project.
The full text of this press release, together with images in high resolution and a video, is available on http://www.eso.org/public/outreach/press-rel/pr-2009/pr-32-09.html

Boucher is an entrepreneur, writer, editor & publisher. He is the founder of SpaceQ Media Inc. and CEO and co-founder of SpaceRef Interactive LLC. Boucher has 20+ years working in various roles in the space industry and a total of 30 years as a technology entrepreneur including creating Maple Square, Canada's first internet directory and search engine.
@marckboucher
Previous Rover Technologies Outlined in Canadian Space Agency Contracts
Next Second Workshop on Satellite Imaging of the Arctic, Saint Hubert 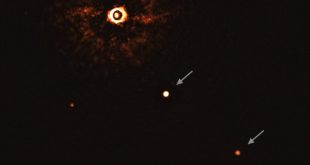 Wow, a telescope in Chile took the first ever image of a sun-like star and two exoplanets