The European Space Agency launched a pair of satellites early Sunday evening on a Russian Rockot launcher from the Plesetsk cosmodrome in northern Russia that feature technology demonstrations from three Canadian Companies.
The two satellites launched were the Soil Moisture and Ocean Salinity (SMOS) and PRoject for OnBoard Autonomy (Proba-2). The Proba-2 satellite is part of ESA’s inorbit technology demonstration programme which are missions dedicated to the demonstration of innovative technologies.

It is the Proba-2 satellite that features Canadian technologies.
Watch a replay of the launch:

Watch the integration of the satellites upon arrival in Russia:

Boucher is an entrepreneur, writer, editor & publisher. He is the founder of SpaceQ Media Inc. and CEO and co-founder of SpaceRef Interactive LLC. Boucher has 20+ years working in various roles in the space industry and a total of 30 years as a technology entrepreneur including creating Maple Square, Canada's first internet directory and search engine.
@marckboucher
Previous Canadian Technologies Featured on ESA Proba-2 Mission
Next This Week in Space For Canada: October 30th, 2009 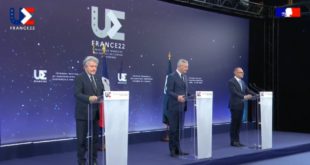