As rocketry teams from across Canada prepare for next weeks 2019 Spaceport America Cup, another competition, the BASE 11 Space Challenge has just wrapped up its Phase 1 Preliminary Design Review (PDR) which saw impressive results by Concordia University and the University of British Columbia rocketry teams.

The BASE 11 Space Challenge was announced in June 2018. The competition has a prize pool of US$1.15 million including the launch prize of US$1 million. To win, student-led teams must design, build and launch a liquid-propelled, single-stage rocket to an altitude of 100 km.

Of the 25 teams still in the competition, five finalists were selected to participate in the Phase I PDR prize challenge which awarded US$50,000.

The three teams that won prizes were;

There was also other prize money handed out for the Early Adopter Dassault Systèmes 3DEXPERIENCE.

Dassault Systèmes is a Chairman’s Circle Partner for the competition and provides both financial support and  licenses for all of the teams to use their 3DEXPERIENCE platform to design and collaborate on the project.

Landon Taylor, chairman and CEO of Base 11 said “the judges were deeply impressed by the outstanding work the student teams put into their rocket designs for Phase 1 of the Base 11 Space Challenge. If this first year has taught us anything, it’s how exciting and unpredictable this field is — the boldest goals, the greatest innovations, the strongest determination can come from unexpected places.”

The early positive results at the BASE 11 Space Challenge should not surprise anyone. While Canada does not have orbital launch capability or a location to launch from yet, the world class talent developing and graduating from universities across the country is making it just a matter of time before Canada is launching its own rockets.

Some of the recent graduates from these universities have started new space companies including Reaction Dynamics and C6 Launch. The former having just graduated from the Creative Destruction Lab’s first Space Stream accelerator program.

Boucher is an entrepreneur, writer, editor & publisher. He is the founder of SpaceQ Media Inc. and CEO and co-founder of SpaceRef Interactive LLC. Boucher has 20+ years working in various roles in the space industry and a total of 30 years as a technology entrepreneur including creating Maple Square, Canada's first internet directory and search engine.
@marckboucher
Previous Canada Faces Decision Point in European Space Agency Program Participation
Next Don’t Let Go Canada and Changes at the Canadian Space Agency Resulted in Government Funding Commitment 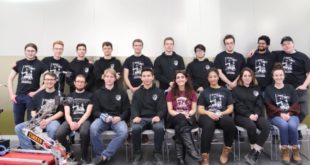